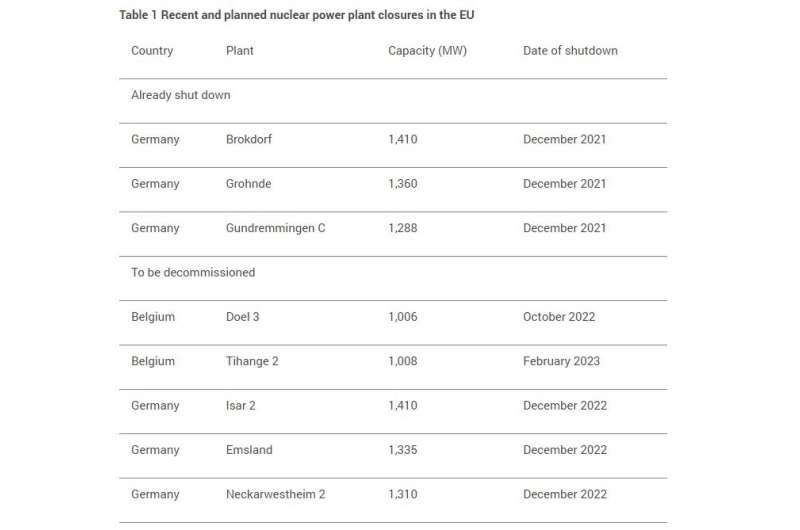 Credit: World Nuclear Association
Following Russia's invasion of Ukraine, the International Energy Agency and the European Commission have come up with plans to rapidly reduce the European Union's imports of Russian natural gas. While the International Energy Agency anticipates that EU nuclear generation could increase by 20 terawatt hours (TWh) (or 2.7%) in 2022, the European Commission only mentions nuclear as a potential source of hydrogen.

In this piece, Anne-Sophie Corbeau, a global research scholar with the Center on Global Energy Policy, answers questions about how nuclear power can help reduce the EU's gas demand.

Can nuclear generation help reduce gas demand in Europe in the near term?

Falling nuclear production in Europe can be attributed to two factors. The first is that French is down from 360 TWh in 2021; electric utility EDF expects French nuclear generation to range between 295 and 315 TWh in 2022, and between 300 and 330 TWh in 2023. Taking the average of these assessments, this will reduce French generation by about 60 TWh in 2022 and 50 TWh in 2023 against 2021 levels. The lower generation forecasts take into account that a number of French nuclear reactors will be closed for their 10-year inspection or for controls due to suspicions of corrosion.

The second reason is the retirement of around 4 GW of nuclear capacity in Germany in the wake of a decision made after the Fukushima Daiichi accident of 2011. These plants generated about 30 TWh in 2020. Another 6 GW is due to be decommissioned by early 2023. The effects will be mostly felt from 2023 onward. The start of nuclear power plants in Finland, France, and Slovakia over 2022–23 will only partly counterbalance this decline.

It is uncertain that more nuclear generation can come from other operating plants. Most plants outside of France (around 39 GW) operate at high rates (>90%), including 25 GW operating at above 96%. In contrast, the load factors in France have been low (about 70%).

Are there actions that policy makers could take to increase nuclear power and reduce Europe's dependence on gas?

There are two actions that policy makers could take for nuclear to help reduce gas consumption:

French nuclear generation could prove the most important factor for adding to EU nuclear power in the near and long term. If EDF were able to increase its power generation back to 2021 levels quickly, that could add 10 TWh in 2022 (the upper range of EDF's forecasts) and 50 TWh in 2023. Given that France has typically low load factors, there is an upside to going back to above 400 TWh—the levels reached in the mid-2010s—but this may be limited by the number of 10-year inspections happening over the coming years.

If these three options are achieved, Europe's nuclear generation would reach almost 660 TWh in 2022 and 760 TWh in 2023, compared to 735 TWh in 2021. Looking at 2030, an additional 14 GW out of the 100 GW operating in 2021 are expected to be retired. A reassessment of nuclear power plants could be done to determine which plants could safely be operated longer. Additionally, European countries willing to build nuclear capacity could accelerate their plans, as these plants typically take a decade to build. If approved by the European Council and the Parliament, the new EU taxonomy, which includes nuclear as a sustainable energy activity, could help to support financing.