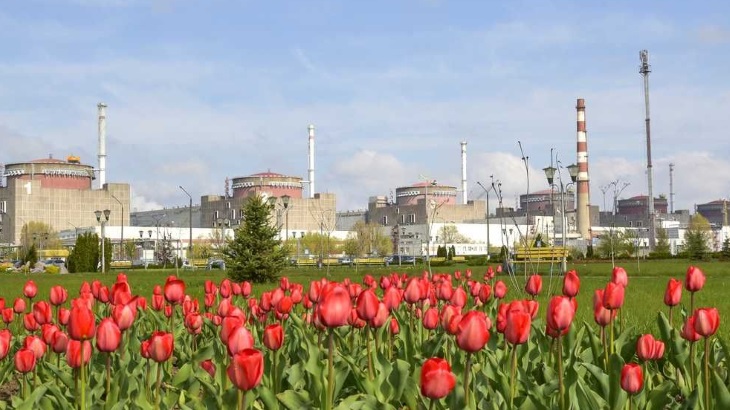 A file picture of Zaporozhe nuclear power plant (Image: Energoatom)
Director General of the IAEA, Rafael Mariano Grossi, said that Zaporozhe has four high voltage offsite power lines plus one backup line. Two of the four were damaged earlier in the current conflict but the one remaining power line and the one on standby, meant, he had been told “there was no safety concern”.

There are six reactors at the Zaporozhe plant, which has been operated by Ukrainian staff but under the control of Russian forces since 4 March. The two reactors which have continued operating - units 2 and 4 - slightly decreased their power supplies to the grid to adapt to the power line situation, the State Nuclear Regulatory Inspectorate of Ukraine (SNRIU), said.

The regulator also said that representatives of Russian nuclear operator Rosatom are still at the site although there was, as yet, no “reliable information on the purpose and plans” of their presence and operations continue to be carried out by Ukrainian staff.

The issues about power supply to Zaporozhe comes just three days after external power was restored to Chernobyl, where emergency generators had been brought into use after power was lost as a result of damage to power lines during the fighting in the country.

Russian military forces took control of Chernobyl on 24 February, with the staff on duty at the time having to remain there since and not been able to rotate, with the IAEA’s Grossi saying he remained “gravely concerned about the extremely difficult circumstances for the Ukrainian staff there”.

Meanwhile the electricity grids of Ukraine and Moldova have been synchronised with the Continental European Grid. Ukrainian President Volodymyr Zelensky said on Twitter: “Ukraine has become a member of the ‘European Energy Union’.” He said that “now our electricity flows into the EU” and that European electricity can flow into Ukraine and thanked all those who had made it possible to “now have a single energy system”.

European Commissioner Kadri Simson thanked the European Network of Transmission System Operators for Electricity “for doing a year’s work in two weeks to make it happen”.

Simson added: “This will help Ukraine to keep their electricity system stable, homes warm and lights on during these dark times. It is also a historic milestone for the EU-Ukraine relationship - in this area, Ukraine is now part of Europe.”