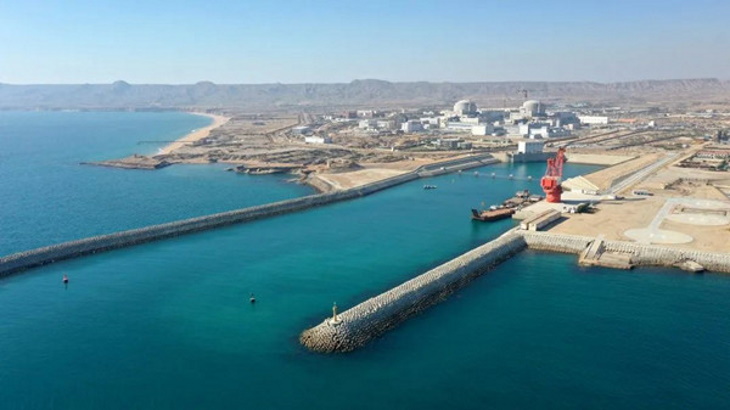 The Karachi site (Image: CNNC)
The 1100 MWe pressurised water reactor was connected to the grid at 3:33pm on 4 March, China National Nuclear Corporation (CNNC) announced. It said the milestone "lays a solid foundation for the subsequent commercial operation of the unit."

Construction of Karachi 3, the second of two Hualong One units to be built near Paradise Point in the province of Sindh, began in May 2016. Karachi 2 entered commercial operation in May last year. The units are the first exports of CNNC's Hualong One, which is also promoted on the international market as HPR1000.

"After each unit of Hualong One is completed, it is expected to generate nearly 10 billion kWh of electricity annually, which can meet the annual electricity demand of more than 4 million households in Pakistan," CNNC noted. It said this is equivalent to reducing coal use by 3.12 million tonnes annually and avoiding the emission of 8.16 million tonnes of carbon dioxide every year.

CNNC said the construction of Karachi 2 and 3 has also driven the development of Pakistan's economy and related industries. The local supply of equipment in Pakistan has increased significantly, it said. "During the peak period of the project construction, it has directly provided more than 10,000 jobs for Pakistan, and indirectly created more than 40,000 jobs through the industrial chain."

The Karachi site - also sometimes referred to as KANUPP - was home to Pakistan's first nuclear power reactor, Karachi 1 - a small 100 MWe (90 MWe net) Canadian pressurised heavy water reactor which shut down in 2021 after 50 years of operation.

The first domestic demonstration plants of CNNC's Hualong One, or HPR1000, design are Fuqing 5 and 6, in China's Fujian province. Fuqing 5 entered commercial operation in January 2021; Fuqing 6 started up in December and was connected to the electricity grid on 1 January.

Nuclear energy currently provides around 8% of Pakistan's energy mix from five reactors: four CNNC-supplied CNP-300 pressurised water reactors at Chashma in Punjab, and Karachi 2. CNNC in 2017 signed a cooperation agreement with the Pakistan Atomic Energy Commission on the construction of a Hualong One as a fifth unit at Chashma.