IAEA Appeal After Shelling and Fire at Zaporozhe 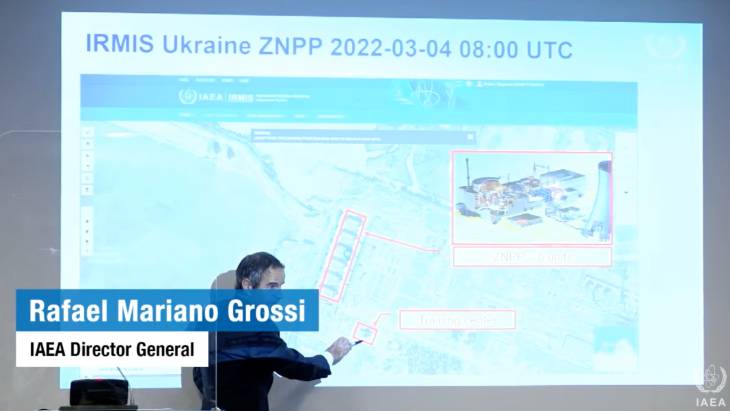 The location of the building which was hit, is highlighted. For scale, the length of the area of the red box marking the power units is about 1km (Image: Screengrab from IAEA media conference)
The State Nuclear Regulatory Inspectorate of Ukraine (SNRIU) said in a statement at 07:15 local time (05:15 GMT) that shelling by Russian forces at the site of the country’s largest nuclear reactor had caused a fire to break out.

The fire, in a training building a few hundred metres from the reactors, was extinguished at 06:20 local time, SNRIU said. The International Atomic Energy Agency (IAEA) said it had been told the fire at the site had not affected "essential equipment and plant personnel were taking mitigatory actions".

In its statement the SNRIU said Zaporozhe's six power units "remain intact, the unit 1 reactor compartment auxiliary buildings have been damaged, which does not affect the safety of the unit. The systems and components important to the safety of the NPP are operational. At present, no changes in the radiation situation have been registered."

SNRIU’s crisis centre has been activated and it said that Russian forces had occupied the nuclear power plant site. It said it was in contact with management at the site and said staff on duty at the site were monitoring "the state of the power units and ensuring their operation in accordance with the requirements of process procedures for safe operation".

Of the six power units at the site, unit 1 was in outage, units 2 and 3 had been disconnected from the grid and "cool down of the nuclear installations is being carried out". Unit 4 is in operation at 690 MW power. Units 5 and 6 are being cooled down.

In an update posted on its website at 16:30 local time SNRIU said staff who were on shift overnight were forced to continue working for more than 24 hours before a change of shift could take place. It said there were no dead or injured among the power plant staff although some staff had received medical care due to stress. The statement also said that unit 4 was now in operation at 825 MW.

The CEO of Ukraine's nuclear power plant operator Energoatom, Petro Kotin, said: "It is difficult to predict the consequences of the capture of ZNPP (Zaporozhe). Immediate intervention by the IAEA and nuclear club member states is needed."

He said that as well as the training building, the administrative building and station checkpoint had been shelled and he said that although station staff were allowed to continue working on Friday, they were "physically and morally exhausted".

The Russian Defence ministry spokesman, Igor Konashenkov, said that Russian troops patrolling the territory had been attacked from the training facility at about 02:00 local time "to provoke a retaliatory strike on the building". He claimed the training facility was set on fire by those retreating. Russia said it has been in control of the area of the site since 28 February.

IAEA Director General Rafael Mariano Grossi has appealed for a halt to use of force and warned of severe dangers if any reactors were hit.

At a media briefing on Friday 4 March he said that he had indicated to both the Russian and Ukrainian sides his availability to immediately travel to Chernobyl to secure a commitment to measures to ensure the safety of nuclear sites. He said both sides were considering his offer.

He stressed that his trip would "have nothing to do with the political aspects of this crisis ... I am not a self-appointed mediator" but was focused on the IAEA's safety brief. He said he thought it was important from a diplomatic point of view to be in the country in person, and that it was time for the IAEA to take action.

"You had the kind of situation we had overnight, which could have been dramatic. So I think that we should not wait for something like this to happen before trying to address it in a more efficient way, since we know what the risk is," he said.​

In his briefing Grossi said that the IAEA had been told that two people, believed to be from the security team, at the Zaporozhe nuclear plant had been injured during the fighting overnight and he said that as of Friday noon local time, Ukrainian staff were operating the control room and operations, with Russian forces in control of the site.

He also gave more details about the six units at the site, saying unit 1 was already in outage for maintenance, units 2 and 3 have been put into a safety-controlled shutdown with unit 4 still operating at 60%. The remaining units, 5 and 6, were already being held in reserve and were operating in low power mode.

In a later update on Friday 4 March, Grossi said there had been no release of radiation "but we cannot rely on this good fortune to continue. It is high time to stop an armed conflict from putting nuclear facilities at severe risk, potentially endangering the safety of people and the environment in Ukraine and beyond. Words must mean something - it is time for action."

The physical integrity of the facilities – whether it is the reactors, fuel ponds, or radioactive waste stores – must be maintained

There must be reliable communications with the regulator and others.

The World Nuclear Association said: "We would like to express our deepest sympathy to the people of Ukraine, our regret for the loss of life and the hope that peace will be restored soon. We are deeply concerned about the developments at the Zaporozhe Nuclear Power Plant in south-eastern Ukraine, and we condemn in the strongest terms the direct attack by the Russian armed forces.

"We urgently call for the cessation of all violence at all nuclear facilities, and for the plant workers and emergency response crews to be allowed to fulfil their duties. In addition, we urgently call for the creation of safe zones surrounding all nuclear power plants in Ukraine to ensure the safety of all nuclear facilities and their staff. We continue to monitor the situation, and we are working very closely with the International Atomic Energy Agency, and other national and international stakeholders."

The European nuclear industry body Foratom said: "We strongly support the IAEA’s calls for an immediate halt in the use of force around Ukraine's nuclear power plants and for the health and wellbeing of its workers to be protected."

It said it was calling "on the EU institutions to fully support" the IAEA director general general's mission to travel to the Ukraine "with the goal of ensuring that the 7 principles for ensuring security and safety at any nuclear facility are not compromised".

The World Institute for Nuclear Security said: "The international order for the peaceful uses of nuclear and other radioactive material is under threat. All of us must demonstrate our commitment to the safe and secure use of these materials for the benefit of humanity. We condemn any military attacks on Ukraine’s nuclear infrastructure and express our support for those working hard to protect and secure these sites."

The UK's Nuclear Industry Assocation said it strongly endorsed "Director General Grossi’s proposal to travel himself to the Chernobyl Exclusion Zone to negotiate with the Ukrainians and the Russians on a framework to uphold the principles of nuclear safety and protection of nuclear installations. It is imperative that these principles are upheld, and that the lives, health and wellbeing of the nuclear workers on site are protected as a priority."