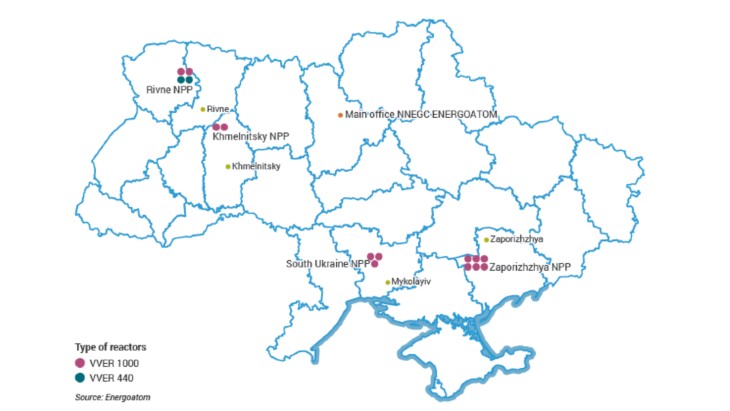 It said nine of the country's 15 nuclear units were connected to the grid on Monday.

The Russian Ministry of Defence’s spokesman Major General Igor Konashenkov has been quoted by Russian media as saying, on the morning of 28 February, that Russian forces "have complete control and are protecting the territory" around the Zaporizhzhya Nuclear Power Plant, with its staff "working to maintain the facility and control the nuclear environment".

Also on Monday, the CEO of Energoatom, Petro Kotin, issued a statement to staff saying: "From the bottom of my heart, I would like to express my gratitude to the entire 35,000-strong team of Energoatom … thank you for your dedicated work on stable operation of power units. After all, every time you go to work day and night, you are deliberately exposed to danger, because in our new realities you need to have courage, even just to get to their jobs."

The International Atomic Energy Agency (IAEA) said it was continuing to closely monitor developments in Ukraine, with a special focus on the safety and security of its nuclear power reactors.

In its update on Sunday 27 February it said it had been told by Ukraine that missiles had hit the site of a radioactive waste disposal facility in Kiev, but there were no reports of damage to the building or release of radioactive material. It said the incident came a day after the Ukrainian nuclear inspectorate had told the IAEA that an electrical transformer at a similar disposal facility near the north-eastern city of Kharkiv had been damaged, also without any reports of a radioactive release.

The two incidents showed "the very real risk that facilities with radioactive material will suffer damage during the conflict, with potentially severe consequences for human health and the environment", Director General Rafael Mariano Grossi said.

“Once again, I urgently and strongly appeal to all parties to refrain from any military or other action that could threaten the safety and security of these facilities,” he added.

There has been a lot of focus on the situation at the Chernobyl site and its exclusion zone as well as Ukraine’s operational nuclear power plants.

On Friday the IAEA responded to reports about radiation levels in the Chernobyl exclusion zone - which the Ukrainian regulator said appeared to have been caused by military movement through the zone disturbing the top layer of soil - by saying that the readings reported by the Ukrainian regulator “remained within the operational range measured in the Exclusion Zone since it was established and therefore do not post any danger to the public”.