The loading of spherical fuel elements has begun at the demonstration high-temperature gas-cooled reactor plant (HTR-PM) at Shidaowan, in China's Shandong province. The milestone came one day after the issuance of an operating licence for the twin-unit plant, which is scheduled to start operations later this year. 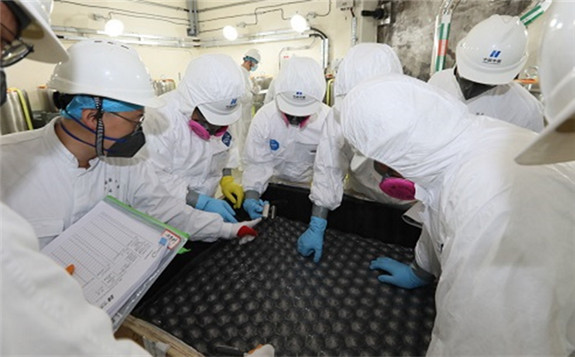 China's nuclear regulator, the National Nuclear Safety Administration, issued an operating licence for the HTR-PM on 20 August, China Huaneng announced. The loading of the first spherical fuel elements into the first reactor started the following day.

The fully ceramic coated particle spherical fuel elements are 60 millimetres in diameter and each contain 7 grammes of uranium enriched to 8.5%. The core outlet temperature of the HTR-PM is 750ºC for the helium gas coolant, steam temperature is 566°C and core inlet temperature is 250°C. It has a thermal efficiency of 40%. The core height is 11 metres and a diameter of 3 metres. There are two independent reactivity control systems: the primary one consists of 24 control rods in the side graphite reflector, the secondary one of six channels for small absorber spheres falling by gravity, also in the side reflector. Fuel elements are released into the top of the core one by one with the reactor operating. Some graphite moderator pebbles the same size are included. They are correspondingly removed from the bottom, broken ones are separated, the burn-up is measured, and used fuel elements are screened out and transferred to storage. A 40-year operating lifetime is expected.

China Huaneng noted the initial fuel loading of plant is divided into two stages: firstly, the fuel elements are loaded into a temporary fuel storage tank, and then transferred to the core through the fuel loading and unloading system. It said it will take about 30 days from the start of the first fuel loading until the reactor achieves first criticality. During this period, it is estimated that about 104,000 fuel elements will be installed. A full load of a single reactor requires approximately 420,000 fuel elements.

The first reactor has now officially entered the state of nuclear operation, the company added, and will be connected to the grid by 2021.

The HTR-PM has the advantages of inherent safety, a high equipment localisation rate, modular design and adaptation to small and medium-sized power grids. It also has broad range of potential commercial applications, including power generation, cogeneration of heat and power, and high-temperature process heat applications.

Construction of the demonstration HTR-PM plant - which features two small reactors that will drive a single 210 MWe turbine - began in December 2012. China Huaneng is the lead organisation in the consortium to build the demonstration units (with a 47.5% stake), together with China National Nuclear Corporation subsidiary China Nuclear Engineering Corporation (CNEC) (32.5%) and Tsinghua University's Institute of Nuclear and New Energy Technology (20%), which is the research and development leader. Chinergy, a joint venture of Tsinghua and CNEC, is the main contractor for the nuclear island.

Cold functional tests - which aim to verify the reactor's primary loop system and equipment as well as the strength and tightness of its auxiliary pipelines under pressure higher than the design pressure - were completed at the HTR-PM's two reactors on 19 October and 3 November last year, respectively. Hot functional tests, which simulate the temperatures and pressures which the reactor systems will be subjected to during normal operation, started in January.