The decision to take unit 1 of the Taishan nuclear power plant in China's Guangdong province offline to investigate a fuel failure issue lies with the plant operator, EDF said yesterday. However, it said under its own operating procedures for its French units, operation of the EPR would be temporarily halted to carry out such inspections and take corrective measures. It noted the chemical composition of the primary circuit water at Taishan 1 remains within regulatory threshold limits. 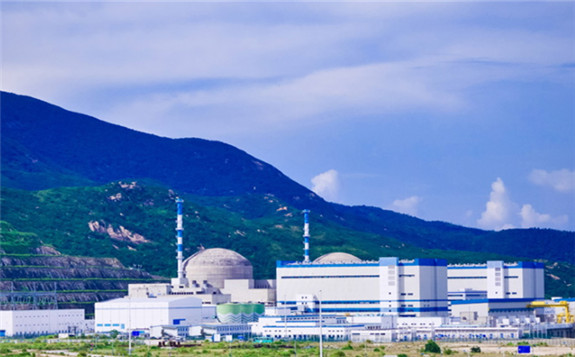 Construction started on unit 1 of the Taishan plant in 2009, followed by unit 2 in 2010. The 1750-megawatt EPRs entered commercial operation in December 2018 and September 2019, respectively. The plant is owned by Taishan Nuclear Power Joint Venture Company Limited (TNPJVC) - a joint venture between CGN (51%), French utility EDF (30%) and the Chinese utility Guangdong Energy Group (19%).

EDF announced on 14 June it had been informed of an increase in the concentration of certain noble gases in Taishan 1's primary circuit. However, it noted this is "a known phenomenon, studied and provided for in the reactor operating procedures". The French company said that, as a shareholder of TNPJVC, it had requested the holding of an extraordinary meeting of the TNPJVC board of directors in order for management to "present all the data and the necessary decisions".

On 16 June, China's National Nuclear Safety Administration (NNSA) confirmed that an increase in the concentration of noble gases in the primary circuit of the Taishan 1 EPR was related to a few damaged fuel rods. The NNSA estimated that of more than 60,000 fuel rods in the core of Taishan 1, about five probably have damage to their cladding. The core of Taishan 1 contains 241 fuel assemblies, each of them made of 265 fuel rods.

"The proportion of damaged fuel rods is less than 0.01% of the total, which is much lower than the maximum damage of the fuel assembly assumed in the design proportion (0.25%)," it noted.

Following a meeting of TNPJVC's board of directors yesterday, EDF said it had explained its position on the Taishan 1 reactor after the analysis of the data provided by the operator and an assessment of its consequences.

"According to the data available to EDF, the radiochemical parameters of the primary circuit water remain below the regulatory thresholds in force at the Taishan plant, thresholds which are consistent with international practices," the company said. "Analysis of the data available to EDF on fuel rod loss of sealing indicates that the situation is evolving; as such it is being continuously monitored by the operator."

However, it added: "On the basis of the analyses carried out, EDF's operating procedures for the French nuclear fleet would lead EDF, in France, to shut down the reactor in order to accurately assess the situation in progress and stop its development. In Taishan, the corresponding decisions belong to TNPJVC."

Further analysis when the reactor is shut down would determine whether all damaged fuel rods are part of a single fuel assembly or belong to different assemblies.

Nuclear fuel operates in a harsh environment in which high temperature, chemical corrosion, radiation damage and physical stresses may attack the integrity of a fuel assembly. The life of a fuel assembly in a reactor core is therefore regulated to a burn-up level at which the risk of its failure is still low. Fuel 'failure' refers to a situation when the cladding has been breached and radioactive material leaks from the fuel ceramic (pellet) into the reactor coolant water. The radioactive materials with most tendency to leak through a cladding breach into the reactor coolant are fission-product gases and volatile elements, notably krypton, xenon, iodine and caesium.

Fuel leaks do not present a significant risk to plant safety, though they have a big impact on reactor operations and (potentially) on plant economics. For this reason, primary coolant water is monitored continuously for these species so that any leak is quickly detected. The permissible level of released radioactivity is strictly regulated against specifications which take into account the continuing safe operation of the fuel.

Reactors around the world are routinely taken offline in order to rectify fuel failures. According to World Nuclear Association estimates, there are about 6-8 such shutdowns at Chinese units annually.

The nuclear industry has made significant performance improvements reducing fuel failure rates by about 60% in the 20 years to 2006 to an average of some 14 leaks per million rods loaded, according to International Atomic Energy Agency figures.