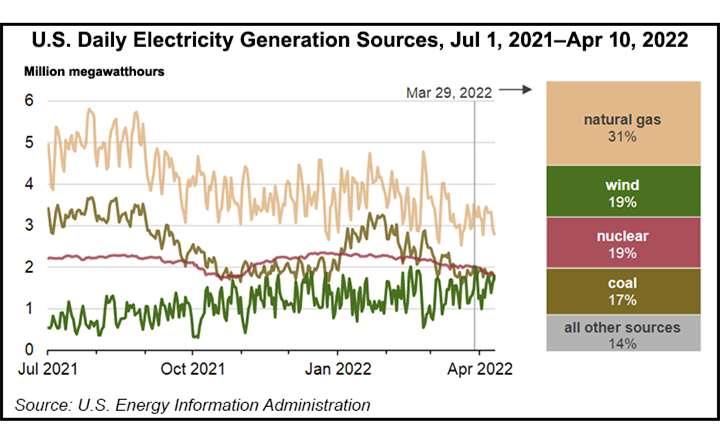 The agency said in a report Thursday that wind turbines in the Lower 48 produced 2,017 GWh of electricity on March 29, making wind the second-largest source of electric generation for the day behind natural gas. On average, natural gas more than doubles wind-fueled electricity.

Daily wind-powered electricity had outpaced coal and nuclear generation separately on other days earlier in 2022, but it had not surpassed both sources on a single day, EIA’s Jonathan DeVilbiss and Tyson Brown wrote.

Amid a years-long push toward renewable energy sources, steady growth in the installed capacity of turbines in the United States has driven gains in wind-powered generation, the researchers said. That wind reached a new high in the spring did not surprise, they added.

On March 29, they noted, the Southwest Power Pool (SPP) — which covers parts of Oklahoma, Kansas, Nebraska, North Dakota, South Dakota and neighboring states — and the Electric Reliability Council of Texas (ERCOT) both reported record levels of wind used for power. SPP and ERCOT cover regions with the greatest wind generation.

U.S. wind capacity, overall, surpassed nuclear capacity in 2019 and currently is third behind gas and coal.

That noted, EIA said the average capacity factor of U.S. wind generators (35% in 2021) is lower than the average of nuclear generators (93% in 2021) because the latter are designed to run at or near full output, and they most often do.

When wind is used more, it also often gets a boost from intentional declines elsewhere, EIA added.

“Because electricity demand tends to be lowest in the spring and fall months, some generators – including both nuclear and coal — reduce their output or schedule maintenance during these months,” the analysts said. “Also, on days when weather patterns lead to more wind generation, competing coal-fired and natural gas-fired generators often are called upon to reduce their output so that overall electricity supply matches demand.”

While recently setting a daily record, on a monthly basis, “we have had less wind generation in the United States than natural gas-fired generation, coal-fired generation, or nuclear generation,” the EIA team added. “We do not expect wind to surpass either coal-fired or nuclear generation for any month in 2022 or 2023, based on our most recent Short-Term Energy Outlook.”Long term, in its Annual Energy Outlook 2022, EIA projected that the share of U.S. power generation from renewables, including wind, will increase from 21% in 2021 to 44% in 2050. The share of natural gas in the total generation mix will decrease slightly, according to the projections, from 37% in 2021 to 34% in 2050.