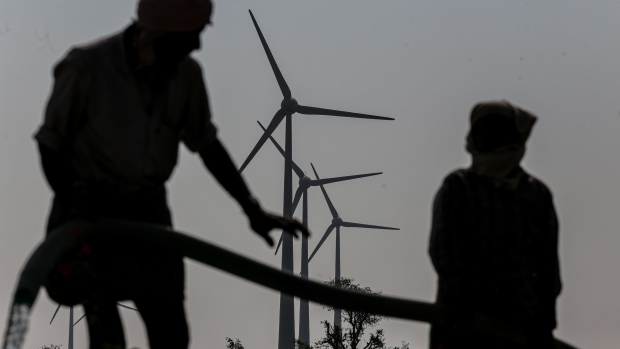 Workers past turbine operating at a wind farm in Hubli, Karnataka, India, on Wednesday, Feb. 23, 2022. India, the world’s third biggest emitter of greenhouse gases, plans to more than triple its clean-energy capacity by the end of the decade and zero out emissions by 2070. Photographer: Dhiraj Singh/Bloomberg , Bloomberg

Envision Energy Co.’s combined orders amount to the largest capacity that a Chinese wind manufacturer has sold to a single foreign country, the Shanghai-based company said in a press release Tuesday. Envision didn’t detail over what time period the orders were received.

Chinese wind equipment suppliers and turbine makers have mostly focused on the massive domestic market. But the top companies are facing growing challenges at home, as smaller players increase sales and competition heats up on pricing. Many are now seeking a more global footprint as nations start to ramp up renewables efforts to meet climate goals.

The wind giants are targeting regions including Southeast Asia, South America and Eastern Europe. Industry leader Xinjiang Goldwind Science & Technology Co. last month received 148.5 megawatts of orders from Chile, after selling an accumulated 8.7 gigawatts of turbines overseas by the end of 2021. Ming Yang Smart Energy Group Ltd., which focuses on the offshore wind market overseas, has received orders from developed countries such as Italy and Japan.

Envision will send to India a total of 596 turbines, each of which has 3.3 megawatts of capacity, with the majority to be delivered in the first half of 2023. The company said it has set up a factory in India to ensure efficient delivery, and the turbines will be installed in five states across the country.