How Europe Can Reduce Its Dependence on Russian Natural Gas

08 Mar 2022  by cnbc.com
Europe’s dependence on natural gas from Russia has given President Vladimir Putin leverage over the European Union, making it hard to impose energy sanctions on the country as punishment for its invasion of Ukraine. 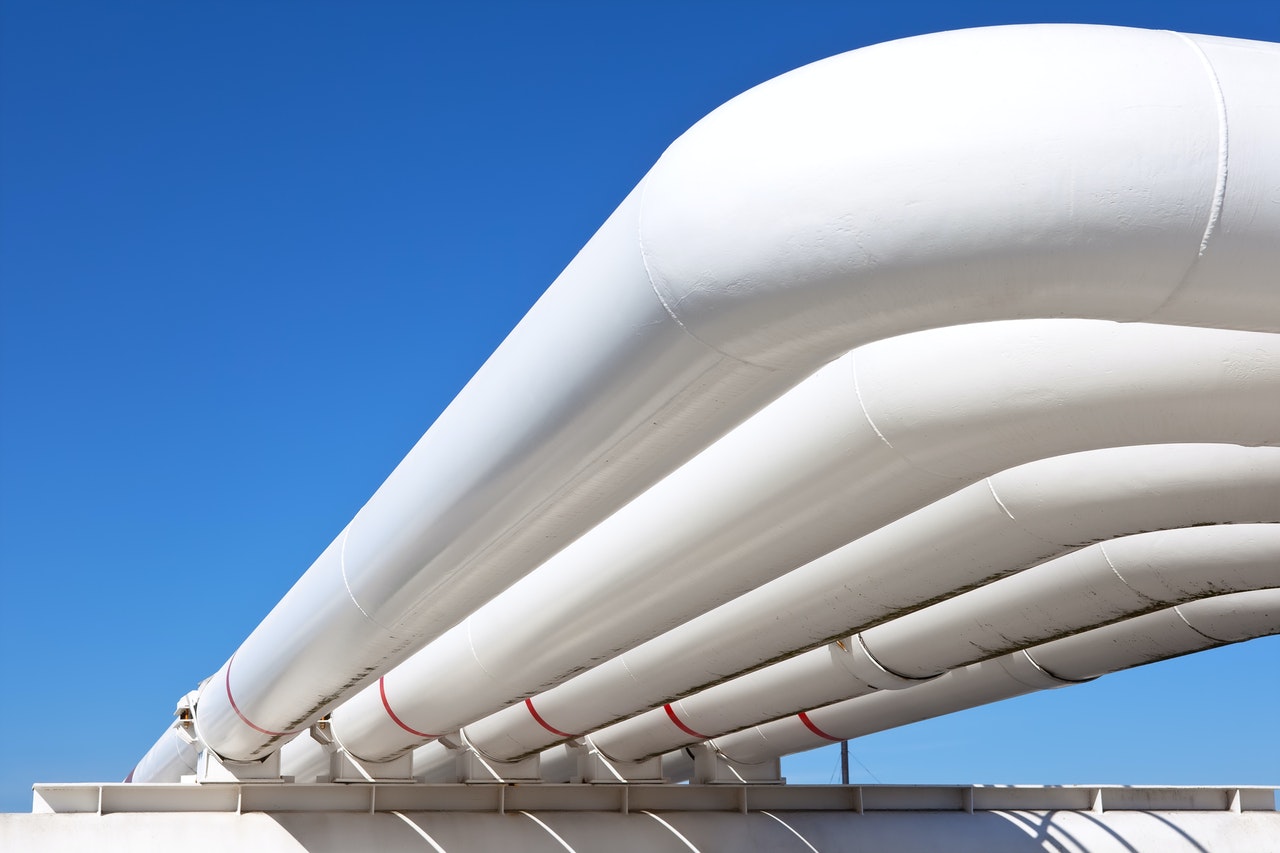 But turning off the spigot to Russian natural gas is going to be hard to do quickly. That’s both because the EU is so dependent on it, and because it has committed to limit its greenhouse gas emissions.

The EU imported 155 billion cubic meters of natural gas from Russia in 2021, almost half (45%) of its gas imports and nearly 40% of the total amount used, according to the International Energy Agency (IEA). Switching from burning natural gas to burning coal is a quick fix that is technically possible, but it’s not going to help the EU achieve its climate goals.

The IEA, an energy policy organization with members from 31 national governments, believes it has a better way.

The organization recently released a plan for Europe to reduce its dependence on Russian natural gas by one-third in one year while still adhering to the European Green Deal, an EU agreement to reduce net greenhouse gas emissions by at least 55% from 1990 levels by 2030.

The IEA’s drawdown, named “A 10-Point Plan to Reduce the European Union’s Reliance on Russian Natural Gas,” is a collection of actions designed to diversify Europe’s energy supply, accelerate its move toward renewables and focus on energy efficiency.

“Nobody is under any illusions anymore. Russia’s use of its natural gas resources as an economic and political weapon show Europe needs to act quickly to be ready to face considerable uncertainty over Russian gas supplies next winter,” IEA Executive Director Fatih Birol said in a written statement announcing the plan.

Here’s a summary of the 10 recommendations:

Do not renew gas supply contracts with Russia. Currently, the EU has a contract with Gazprom, a Russian majority state-owned multinational energy corporation, for more than 15 billion cubic meters of gas imports per year. That contract is due to expire at the end of the year. The EU is advised to let that and other gas import contracts expire.

Replace expired contracts from Russia with those from other sources. Domestic production of natural gas and imports from non-Russian sources, including from Azerbaijan and Norway, are set to increase over the coming year by as much as 10 billion cubic meters compared to 2021. But the IEA says the EU should go further and increase its importing of liquid natural gas (LNG), which is natural gas that has been cooled to a liquid state at about -260° Fahrenheit so it can more easily be transported in ships or trucks.

The IEA also recommends the EU increase its biogas and biomethane supply, but those supply chains take time to grow. So, too, do the supply chains of low-carbon “green” hydrogen made by with electrolysis.

Store more gas. Storing gas gives any region a buffer of security in the case of changing seasons, extreme events or in this case, war. The IEA would have working storage capacity filled at 90% by October 1 to keep homes warm during the winter.

Accelerate deployment of renewables, like wind and solar. In 2022, the EU is expected to see a 15% increase in its power delivered from renewables compared to 2021 due to aggressive additions of new solar and wind facilities and favorable weather patterns. The IEA recommends accelerating renewable projects in progress by addressing delays in permitting. This would require more administrative workers, clearly communicating between various permitting offices, setting clear deadlines and making applications digital. 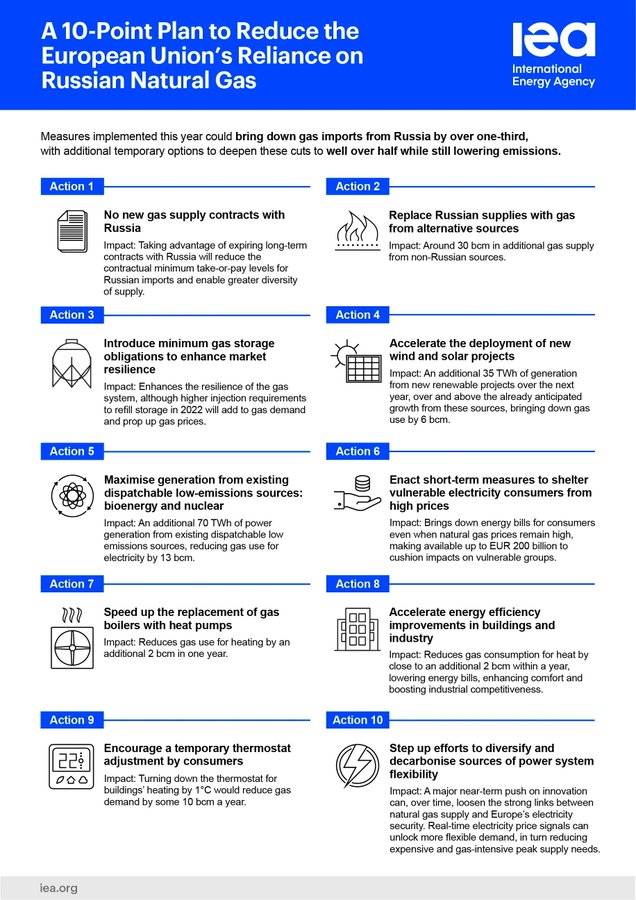 Keep existing nuclear open and operate bioenergy plants at full scale. Some of the existing nuclear reactors in Europe were taken offline in 2021 for maintenance and safety checks, but when those power plants get back online in 2022, that will add to the EU’s clean energy generation. Nuclear power plants, once they are built, generate energy without emitting any greenhouse gases. Also, commercial levels of nuclear power are expected to begin at Finland’s new nuclear plant in 2022, which will support the EU’s energy goals.

A small handful of nuclear power reactors were set to be taken offline in 2022 and 2023, but if those reactors stay operational, that would decrease the EU’s demand for Russian natural gas.

Also, bioenergy power plants which operated at only 50% capacity should be fueled fully and operated to their capacity.

Protect vulnerable customers. When energy prices soar, energy companies do well, but customers can struggle badly. The EU should be prepared to support low-income customers’ pay for their high energy bills. One way to account for the current high-energy-price market is to put temporary taxes on excessively high profits from energy companies and use that collected money to pay for energy bills for low-income customers.

Doubling the installation rate of heat pumps in homes would cost the EU $16.3 billion (15 billion euros) and it would save another 2 billion cubic meters of gas within the first year. It would be ideal, the IEA says, to simultaneously increase energy efficiency projects within homes.

Also, the IEA suggests accelerating the installation of smart thermostats to reduce energy demand. Adoption could be accelerated by providing subsidies to households to install one, for example.

Ask the public to turn down their heating. Most buildings are almost 72 degrees Fahrenheit on average in the EU, and asking consumers to turn down their thermostat by 1.8 degree Fahrenheit, or 1 degree Celsius, has the potential to reduce demand for gas by 10 billion cubic meters.

Increase low-emissions grid reliability mechanisms. The IEA recommends that the EU focus on adding flexibility to the power grid both in terms of being resilient through seasonal shifts and in being able to handle short-term demand spikes. Currently, the EU manages the ebbs and flows in the energy grid demand with stored natural gas.

Improving grid reliability and flexibility in the future will depend on a diverse portfolio of responses, including both battery technology and other large scale, longer-term energy storage technologies. Some low-carbon gases made within the EU such as biomethane, low-carbon hydrogen and synthetic methane can be part of improving reliability of the grid, but they won’t be sufficient.

It’s worth noting, the IEA’s plan pales in the comparison to news of another plan reportedly coming from the EU on Tuesday that would slash Russian imports of natural gas by 80% in the coming year.