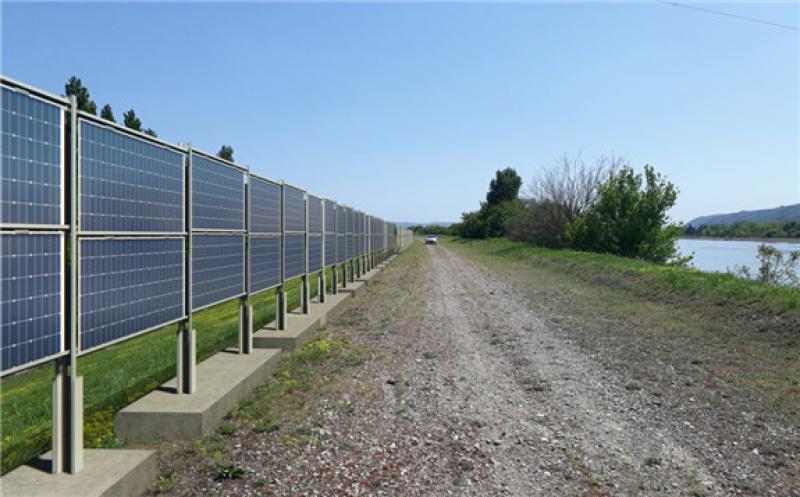 This technology makes it possible to enhance the value of land that is already being utilized, while preserving its other uses. But it also involves many technical challenges, such as cable lengths and resistive losses.

As part of its “Photovoltaïque Grand Linéaire” innovation program, CNR is initially deploying three pilot projects with the aim of demonstrating the technical and economic viability of these parks which can be several tens of kilometers long.

Under development since 2017, the first pilot facility was commissioned this December on the Sablons dyke, in the Isère department. The 104 kW system was installed over 350m along a canal. It relies on bifacial PV panels placed on mounting systems with a height of 3 meters.

CNR is also working with the French Institute for Energy Transition INES.2S to optimize the architecture of thee vertical facilities. Their work made it possible, for example, to develop a software tool to determine the optimal cabling of such power plants and to make a precise inventory of the issues at stake.

From a societal point of view, the Sablons demonstrator is also accessible to users of the Rhône embankment. The park will not be fenced and the panels will be able to be approached closely, which will prefigure the more massive integration of solar photovoltaics on other types of uses such as electric vehicles, road railings, or building facades, among others.

The second demonstrator will consist of a 1.5 km long system installed on a section of the ViaRhôna dike, which runs along the Rhône river, with the panels being East-West oriented. Construction is expected to commence in 2023. In particular, it will allow the testing of innovative energy evacuation devices intended to reduce energy losses due to transport in electric cables.

The third, with a length of 10 to 20 km, should see the light of day in 2025. It will be the first full-scale demonstrator of a large linear photovoltaic park.