Masdar, one of the world’s leading renewable energy companies and a subsidiary of Mubadala Investment Company, announced today it has signed an agreement with the Government of the Republic of Armenia to develop a 200-megawatt (MW) solar photovoltaic (PV) plant. The Ayg-1 project will be Armenia’s largest utility-scale solar plant. 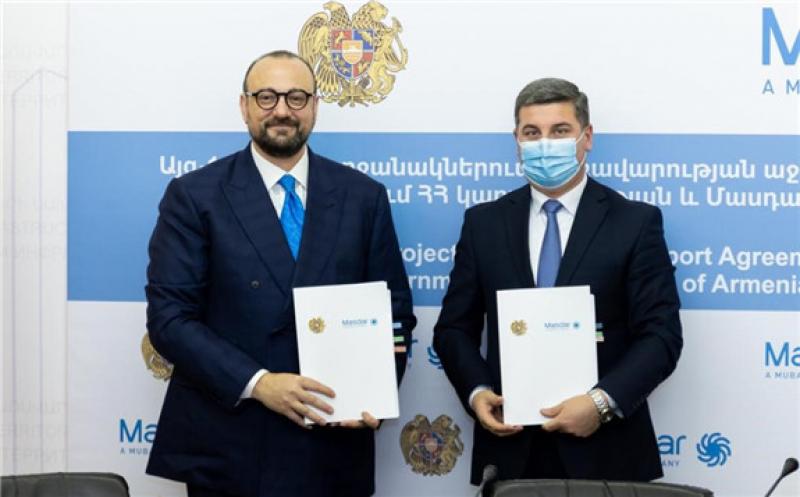 The Government Support Agreement (GSA) was signed by His Excellency Gnel Sanosyan, Minister of Territorial Administration and Infrastructure of the Republic of Armenia , and Mohamed Jameel Al Ramahi, Chief Executive Officer of Masdar, at a ceremony today in Yeravan, the nation’s capital.

Gnel Sanosyan, the Minster of Territorial Administration and Infrastructure of the Republic of Armenia, commented: “The gradual increase of renewable sources in our country’s energy system is one of the priorities set by the Government of Armenia. We regard this cooperation with Masdar as an important step towards this goal, as well as towards endorsing Armenia’s investment potential. The Ayg-1 industrial 200 MW solar plant project is a milestone on this road. We expect the signing of this document to mark the start of a fruitful and lasting cooperation on this and for new upcoming projects.”

The Ayg-1 project will be developed on a design, finance, build, own, and operate (DFBOO) basis and the project company will be 85 percent owned by Masdar, with the Armenian National Interests Fund, (ANIF, a government owned investment vehicle) holding 15 percent. In July, the Armenian Government announced that Masdar was the winning bidder for the project, having submitted a tariff of US$0.0290 per per kilowatt-hour (kWh) in a competitive process.

HE Ahlam Rashid Ahmed AlAbd AlSalami, Chargé d’Affaires of the Embassy of the United Arab Emirates, said: “This agreement will strengthen the already powerful ties that exist between the United Arab Emirates and the Republic of Armenia. The UAE and Armenia are united in our commitment to take positive action against climate change, while creating greater economic opportunities and this project marks a key stage in Armenia’s clean energy journey and our hopes for this project to serve as an exemplary success to attract opportunities for Armenia from the UAE.”

David Papazian, Chief Executive Officer of ANIF commented: “We are glad to welcome Masdar into Armenia’s journey towards the decarbonization of the country’s energy supply. Ayg-1 is an ambitious step towards the fulfillment of this goal, and Masdar’s expertise and experience in the field is key to the success of the project. Ayg-1 is set to become a highly visible investment project, benefitting the country, its citizens and investors, while committing to highest sustainability standards in the industry.”

Mohamed Jameel Al Ramahi, Chief Executive Officer of Masdar, said: “This agreement marks a milestone on Armenia’s clean energy journey, and the development of this project will support the nation’s sustainable economic development. We look forward to working with the Armenian National Interests Fund on further opportunities in this field, and leveraging the experience we have gained as a global leader in renewable energy projects to support the diversification of Armenia’s energy mix. ”

The Ayg-1 plant will be located between the Talin and Dashtadem communities of Armenia, in an area where solar radiation is high and land is unusable for agricultural purposes. The plant will span over 500 hectares, and will create numerous direct and indirect jobs.

Armenia is looking to increase the share of renewables in its energy mix and reduce its dependence on imported oil & gas. The country also has significant solar energy potential, with an average annual solar energy flow per square meter of horizontal surface of around 1,720 kWh, compared with the average European figure of 1,000 kWh.