A project that bids to combine up to 20GW of solar PV with the world’s largest energy storage battery and a 4,200km-long subsea power cable has moved a step forward after Indonesian authorities greenlit its proposed transmission cable route. 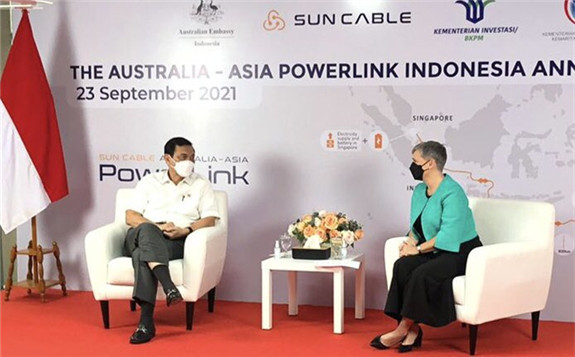 The ‘Sun Cable’ project, which will pair multi-gigawatt solar and energy storage projects in Northern Territories, Australia to provide power to Singapore, was first proposed in 2019, but has gathered pace this year after receiving priority status from the Australian government in March.

And now the project has cleared a further hurdle after Indonesia’s Coordinating Minister for Maritime Affairs and Investment, Luhut Binsar Panjaitain, confirmed that the country’s government had recommended a route for transmission cables to pass through Indonesian waters and granted a subsea survey permit.

A video published by Sun Cable accompanying a press release revealed that a stretch of the route had already been surveyed, with the remainder to be completed early next year.

The project would also appear to have been significantly up-scaled since its last update, with the developers now stating that the Australia-ASEAN PowerLink will be combined with a solar farm of between 17 – 20GWp in generation capacity and an energy storage system of between 36 – 42GWh in size.

At its inception, developers said the facility would combine around 10GW of solar and 20 – 30GWh of energy storage.

Its purported cost has also increased, from an initial AU$22 billion to more than AU$30 billion.

The purported financial benefits of Sun Cable are considerable, with the developers claiming it would generate up to AU$2 billion in exports for Australia each year.

“We want this world-leading project to create a step-change in the Indo-Pacific’s capability to achieve net zero ambitions and economic growth sustained by renewable energy,” he added.