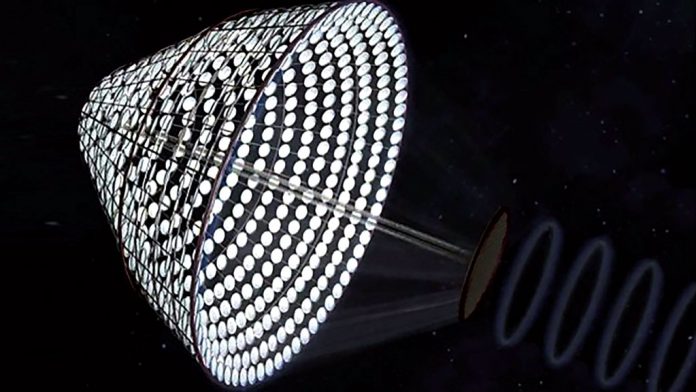 China is taking the first steps to pioneering the installation of a station capable of capturing sunlight from Earth's orbit and transmitting it to the ground.

After becoming a planetary powerhouse in solar energy, China wants to extend its dominance in solar energy to space as well. Xie Gengxin, deputy director of the Chongqing Institute for Collaborative Research and Innovation for Civil-Military Integration in Southwest China, told the China Daily newspaper in February that researchers from Chongqing University, Xi'an Academy of Space Technology, In Shaanxi Province, and Xidian University, also in Xi'an, have begun projects for a testing facility in the Bishan District of Chongqing to verify the theoretical feasibility of a solar power station in orbit.

The idea is to get the station up and running by 2050, which would make China the first country to harness the sun's energy in space and transmit it to Earth.

The 13,000-square-foot facility will test space-transmission technologies while studying the effect of microwaves transmitted back to Earth on living organisms. The initial $ 15 million investment will be made by the Bishan district government. If successful, the project will help reduce land pollution and alleviate power distribution problems.

The energy that comes from the sea

In the initial test facility, microwave power transmission technologies will be developed and tested. The effects of microwave beams on plants and animals will also be tested. Four to six strung balloons will be used to transport solar panels to an initial height of 1,000 meters and then send the energy back to the ground. That would already be a significant improvement from the 100 meters that the researchers involved currently have radiated energy.

In the next step, the balloons will be positioned at the edge of space to fully demonstrate the feasibility of radiating energy from satellites to Earth. The construction of a small to medium sized plant using this principle to place a solar panel in the stratosphere is planned to take place between 2021 and 2025.

The next step will be a power plant capable of producing megawatts orbiting at an altitude of 36,000 km. Construction is expected to begin in 2030, launching before 2040. The station would be positioned to provide power 99% of the time.

Finally, a space-based commercial solar power station with gigawatt production would be launched in 2050, supplying energy to the Earth and radiating it to deep-space exploration spacecraft.

It was already considered using solar energy available in space as a reliable renewable source in the 1970s, but the technological difficulties at the time for such a project inhibited research. The cost of a space solar plant is also a considerable obstacle. One such facility weighs thousands of tons, and tossing it or building it into space is not cheap at all.

The situation is quite different today: there has been considerable progress in wireless transmission and photovoltaic cell design and efficiency, for example. And companies like SpaceX are rapidly reducing launch costs.

According to John Mankins, a physicist who led NASA's efforts in this field in the 1990s, before the US space agency abandoned research, one way to harness solar energy in space would be to launch tens of thousands of "solar satellites." Once joined, they would form a huge conical structure orbiting 35,000 kilometers from Earth.