27 Apr 2022  by world-nuclear-news.org
Unit 6 of the Hongyanhe nuclear power plant in China's Liaoning province has attained a sustained chain reaction for the first time. The unit - the second of two ACPR-1000 reactors built as Phase II of the plant - is scheduled to enter commercial operation later this year. 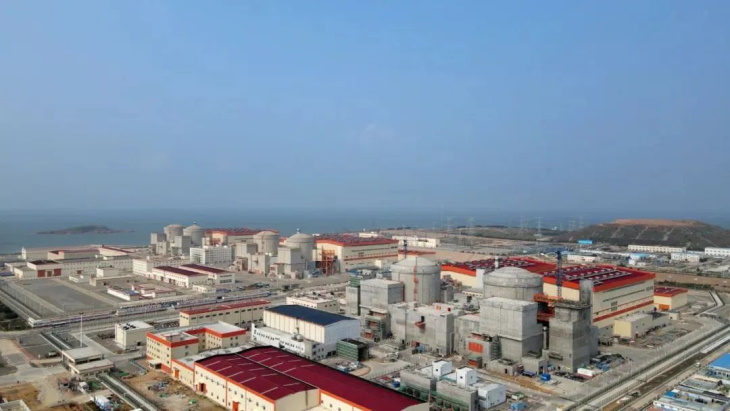 The Northeast Nuclear and Radiation Safety Supervision Station of the Ministry of Ecology and Environment carried out the first criticality control point inspection of Hongyanhe 6 between 12 and 14 April. At 7.36am local time on 20 April, it released the unit from the critical operation control point, and work began to bring the reactor to first criticality.

China General Nuclear (CGN) said the milestone was reached at 1.13am on 21 April, "marking the official entry of the unit into the operating state with power, and laying a solid foundation for the subsequent ramp-up, grid connection and commercial operation of the unit".

Phase II of the Hongyanhe plant - units 5 and 6 - comprises two 1080 MWe CGN-designed ACPR-1000 reactors. Construction of unit 5 began in March 2015 and that of unit 6 started in July the same year. Unit 5 achieved first criticality in June last year and entered commercial operation on 31 July. The loading of the fuel into unit 6 began on 25 March this year and was completed on 28 March. The unit will enter commercial operation once it has completed a series of commissioning tests, including a test run lasting 168 hours.

The Hongyanhe plant is owned and operated by Liaoning Hongyanhe Nuclear Power Company, a joint venture between CGN and State Power Investment Corporation, each holding a 45% stake, with the Dalian Municipal Construction Investment Co holding the remaining 10%.

The ACPR-1000 - a three-loop unit with double containment and core-catcher - was launched by CGN in November 2011. In 2012, central planners in Beijing directed China National Nuclear Corporation (CNNC) and CGN, to 'rationalise' their reactor programmes. This meant CNNC's ACP1000 and CGN's ACPR-1000 were 'merged' into one standardised design - the Hualong One (HPR1000).