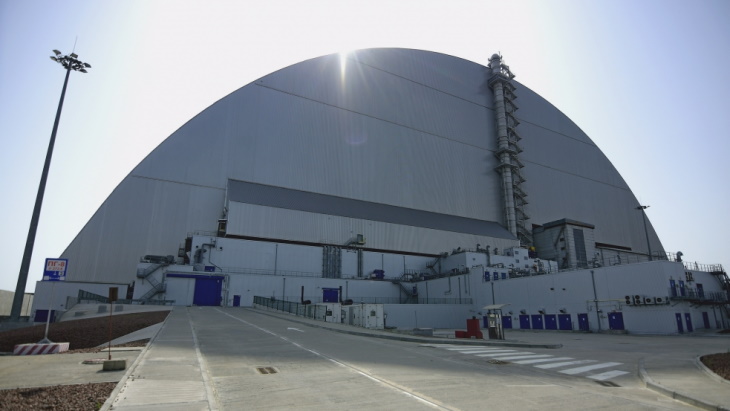 Emergency generators have been providing power at Chernobyl (Image: Chernobyl NPP)
IAEA Director General Rafael Mariano Grossi said Energoatom CEO Petro Kotin had told him on Sunday that specialists had fixed one of two damaged lines to the plant so it would be able to deliver the required power to the site.

The IAEA said that the State Nuclear Regulatory Inspectorate of Ukraine (SNRIU) confirmed on Sunday evening that the power line was fixed and Chernobyl was ready to be reconnected to the grid on Monday. However in an update on Monday, Ukrainian energy firm Ukrenergo said that "before the power supply was full restored" to Chernobyl and the city of Slavutych, it was damaged again.

It was not clear if all the external power supply to the plant had been lost again, but called for "unimpeded and quick access of Ukrenergo repair crews to these lines for inspections and repairs".

The initial news that the power line had been fixed was welcomed by the IAEA's Grossi on Sunday evening as a "positive development as the Chernobyl nuclear power plant has had to rely on emergency diesel generators for several days".

"However, I remain gravely concerned about safety and security at Chernobyl and Ukraine’s other nuclear facilities," he added.

SNRIU said it was closely monitoring the situation in the Chernobyl exclusion zone ahead of the annual "fire season" when spontaneous fires often occur in the area, still contaminated by radioactive material from the 1986 accident, the IAEA said.

The 211 staff who were on shift at the time Russian forces took control of Chernobyl on 24 February have not yet been able to leave the site, with SNRIU saying they were no longer carrying out repair and maintenance of safety-related equipment, "in part due to their physical and psychological fatigue after working non-stop for nearly three weeks".

The "increasingly dire situation facing personnel at the facility, coupled with persistent issues related to communication from the site as well as the now resolved power supply problem" added urgency to efforts to agree measures to secure the safe operation of Ukraine’s nuclear facilities, the IAEA said.

"We can’t afford to lose more time. The IAEA stands ready to act immediately, based on our proposed framework that requires agreement from the parties of the conflict before it can be implemented. We can only provide assistance to Ukraine’s nuclear sites once it has been signed. I’m doing everything I can to make this happen very soon," he said.

The IAEA is preparing detailed technical proposals for its assistance, based on its seven 'indispensable pillars' for nuclear safety, and follows meetings Grossi held on Thursday with the Ukrainian foreign minister Dmytro Kuleba and Russia’s foreign minister Sergei Lavrov.

The Ukrainian staff continue operating the largest of the country's four operating nuclear power plants, Zaporozhe, under the control of Russian forces, as they have since 4 March. On Sunday, SNRIU reported that 11 members of staff from Russia’s nuclear power company Rosatom are also now on site, although not interfering with the operation of the facilities, the IAEA statement said.

The IAEA said that the SNRIU said all four nuclear plants were operating within safe limits with radiation levels remaining normal. Eight of the country’s 15 reactors remain operating, it added.