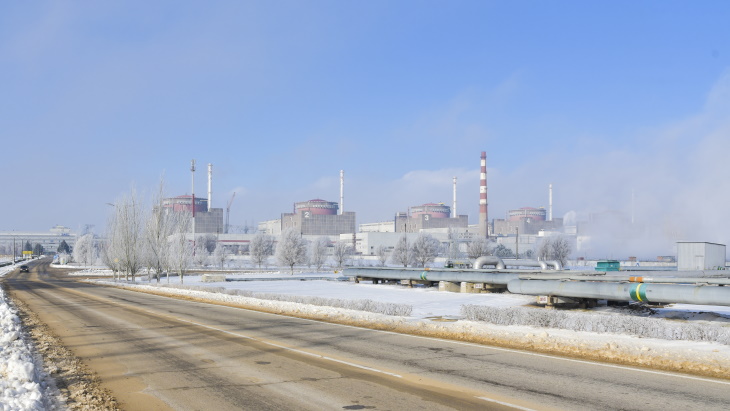 A file picture of Zaporozhe nuclear power plant (Image: Energoatom)
Petro Kotin, CEO of Energoatom, said that he had spoken with the Director General of the IAEA on Monday 28 February about the situation in the country, where Russian forces have been involved in military action since last Thursday.

"In this regard, we call on the IAEA to intervene to prevent occupying forces in the 30 kilometre zone around our nuclear power plants," said Kotin, who also called on the Chernobyl zone and control of the nuclear facilities there to be returned to the Ukrainian side.

Ukraine has 15 units across four nuclear power plants. The plants were all reported to be working normally, according to updates posted on their websites on Tuesday 1 March.

That was the same position the State Nuclear Regulatory Inspectorate of Ukraine (SNRIU) had reported to the IAEA according to a statement posted by the international organisation on Monday 28 February at about 19:15 Ukraine time (17:15 GMT).

In that update, the IAEA said that it had been told that Russian forces were "operational near the site but had not entered" Zaporozhe (also known as Zaporizhzhia) nuclear power plant in eastern Ukraine at that time.

The Russian Ministry of Defence’s spokesman Major General Igor Konashenkov was quoted by Russian media as saying, on the morning of 28 February, that Russian forces "have complete control and are protecting the territory" around the Zaporozhe plant, with its staff "working to maintain the facility and control the nuclear environment".

IAEA Director General Rafael Mariano Grossi said: "I continue to follow developments in Ukraine very closely and with grave concern, especially the conflict’s potential impact on the safety and security of the country’s nuclear facilities. It is extremely important that the nuclear power plants are not put at risk in any way."

He added: "An accident involving the nuclear facilities in Ukraine could have severe consequences for public health and the environment."

The IAEA statement also said that Ukraine had informed them last week that "Russian forces had taken control of the facilities of the State Specialized Enterprise Chernobyl NPP, located within the Exclusion Zone set up after the 1986 accident. The regulator said today that the shift supervisor at the site had not been replaced since 24 February but that he continued to perform his duties.

"SNRIU also provided radiation readings from the site which the IAEA assessed as low and in line with near background levels."

The IAEA director general said that staff at all nuclear facilities must be able to work and rest, calling on "those in effective control of such sites not to take any actions that could compromise their safety or put them under undue pressure".