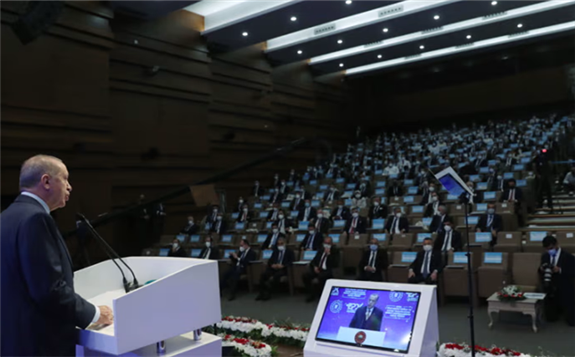 Turkey plans to commission its first nuclear power Akkuyu with an installed capacity of 4,800 MW in 2023. The facility, under construction by Russia’s nuclear energy company Rosatom, is going to produce electricity to meet 10 percent of the country’s consumption.

Erdoğan said environmentalists criticized the construction of nuclear power plants, but that Turkey is determined to use nuclear energy. Anyone against nuclear energy in Turkey is against the country’s economic independence and welfare, he added during the opening ceremony of the new building of the Energy Market Regulatory Authority.

Erdoğan highlighted the commissioning of Akkuyu as a way to make up for a decades-long delay in the use of nuclear energy and an important contribution to fight climate change.

He stressed the consumption of electricity has increased by 8 percent this year.

Studies show demand will increase by an average of 3.5 percent per year, and the government must take into account the increasing energy needs and the global economic outlook, Erdoğan said.

The National Energy and Mining Policy, which was announced in 2017, promotes the goal of using more domestic and more renewable energy.