France can achieve its net-zero emissions target by 2050 through energy efficiency and electrification that would lead to a 35% increase in electricity demand, the French grid operator has said in a new report. Of the scenarios considered by Réseau de Transport d'Electricité (RTE), the cheapest implies constructing 14 large new nuclear power reactors, plus a fleet of small modular reactors, as well as significantly investing in renewables. 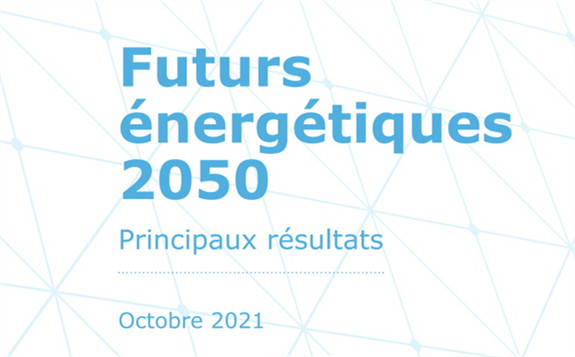 As part of its legal mandate and in response to a referral from government, in 2019 RTE launched an extensive study of the evolution of the country's electricity system, titled Energy Futures 2050. The main findings of the study were presented by Xavier Piechaczyk, chairman of RTE's Management Board and Thomas Veyrenc, executive director in charge of the Strategy, Prospective and Evaluation division, during a press conference on 25 October.

"The French electricity system, unlike that of the majority of its neighbours, is not based on fossil fuels," the report notes. "Its main characteristic is that it rests mainly on a fleet of 56 nuclear reactors, mostly built and commissioned between the end of the 1970s and early 1990s ... Today, it is indisputable that it constitutes a major asset for France in the fight against climate change by producing largely carbon-free electricity in large quantities."

Nuclear accounts for almost 75% of France's power production, but former French president Francois Hollande said he aimed to limit its share of the national electricity generation mix to 50% by 2025, and to close Fessenheim - the country's oldest nuclear power plant - by the end of his five-year term, in May 2017. In June 2014, his government announced nuclear capacity would be capped at the current level of 63.2 GWe and be limited to 50% of France's total output by 2025. The French Energy Transition for Green Growth Law, adopted in August 2015, did not call for the shutdown of any currently operating power reactors, but it meant EDF would have to close older reactors in order to bring new ones online. However, under a draft energy and climate bill presented in May 2019, France will now delay its planned reduction in the share of nuclear power in its electricity mix to 50% from the current 2025 target to 2035.

RTE looked at six scenarios which considered future energy mixes exclusively based on renewable energy sources and those based on a mixture of renewables and nuclear. The scenarios differ primarily in the availability of nuclear capacity.

"In the short/medium term (2030-2035), the decision of shutting down nuclear reactors is a matter of political choice," the report says. "At this time, only two options exist to increase the production potential of carbon-free electricity: keep nuclear reactors in operation (the deadlines are in any case too close together to build new ones) and develop renewable energies.

"In the long term (2050-2060), the closure of second-generation nuclear reactors is an industrial constraint: in addition to supporting the expected increase in electricity consumption, French generating facilities will have to be radically renewed to replace production in the order of 380-400 TWh per year.

"It is in this perspective that it is necessary to replace the energy choices that France must make in the coming years: meet the double issue of a necessary increase in carbon-free electricity production capacity and a scheduled closure of the majority of the facilities that now meet this need."

It says the need to build new thermal power plants based on carbon-free gas stocks (including hydrogen) is important if the revival of nuclear power is minimal and it becomes massive - and therefore expensive - if the energy system is based on 100% renewables.

The construction of new reactors is "economically relevant", RTE says, all the more so when it makes it possible to maintain a fleet of around 40 GW in 2050 (with a combination of existing and new units). The study concludes "with a good level of confidence" that scenarios including at least a 40 GW nuclear fleet can lead, in the long-term, to lower costs for the community "than a scenario 100% renewable based on large parks".

One of the scenarios studied by RTE is for a nuclear generating capacity of 50 GW in 2050. This, it says, implies extending operation of most existing reactors to 60 years, to put into service 14 new EPR2-type reactors between 2035 and 2050 (mostly between 2040 and 2050) and to install in addition a significant capacity of small nuclear reactors. Such nuclear generating capacity "is likely to produce around 325 TWh in 2050. Such a volume is equivalent, in the benchmark consumption trajectory, of about 50% of national production."

Reaching a carbon neutral electricity system by 2050 can be achieved at a "manageable cost" for France, RTE says. By 2030, the country should develop mature renewable energies as quickly as possible and extending the operation of existing nuclear reactors increases the chances of reaching the target of a 55% reduction in emissions.

However, it notes: "Whatever the scenario chosen, there is an urgent need to mobilise."