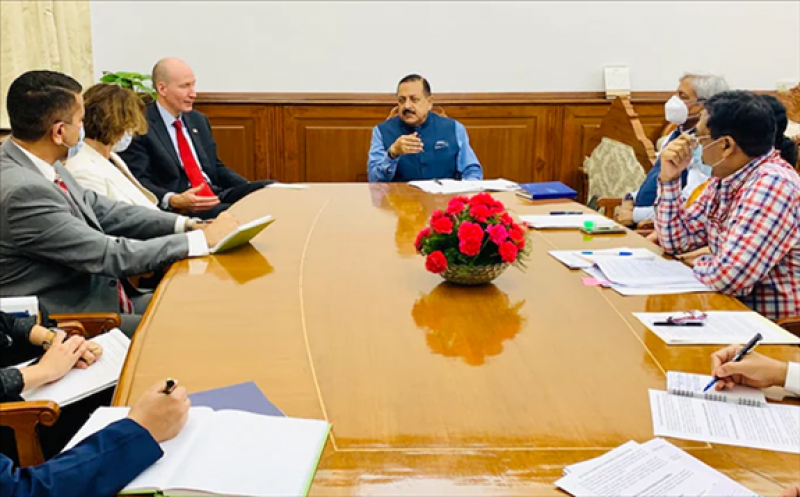 The minister sat down with a high-level US delegation, led by Deputy Secretary of Energy David M Turk, and said that in the coming decade India would produce more than three times nuclear power from the current level of 6,780 MW.

He called for greater Indo-US cooperation in the field of clean and green energy, and reiterated India's commitment to promoting its nuclear programme, not only as a major source of clean energy but also as a tool of application in areas like the healthcare and agriculture sector.

"India will produce more than three times nuclear power and it is expected to reach 22,480 MW by the year 2031, from the current 6780 MW as more nuclear power plants are also planned in future," Dr Jitendra Singh informed the delegation.

He said India and the United States were revamping their strategic partnership to focus on clean energy sectors, such as biofuels and hydrogen.

"With the rapid introduction of biofuels, renewable energy and green Hydrogen, India is well poised to play an important role towards Carbon neutrality," the minister said.

He said the government was already encouraging the adaptation of hydrogen fuels and technology for the mobility sector and many industries like steel, cement, and glass manufacturing industries had already started using Hydrogen for heating requirements.

Jitendra Singh said India had proposed to launch a Mission “Integrated Biorefineries” where it was collaborating with the US apart from a few potential areas of collaboration identified in Advanced Biofuels and Renewable Chemicals and Materials.

Deputy Secretary of Energy, David M Turk assured that the USA would deepen its collaboration with India in nuclear energy and promised deeper engagement with India in the Green Hydrogen sector as recently announced by Prime Minister Narendra Modi in his Independence Day Speech.

The two countries have also signed up for the transformation of the US-India gas task force, which will put emphasis on the intersectionality between bio-energy, hydrogen, and renewable fuels with natural gas.

The meeting comes just a day after the US Special Presidential Envoy for Climate John Kerry said that India had demonstrated how economic development and clean energy can go hand-in-hand.

During his two-day visit to India, Kerry said, "You have already reached about 100 GW. I congratulate India for remarkable milestone. We are absolutely confident that the 450 gigawatts as a goal can and will be reached. We look forward to partnering with India."

Kerry was on a two-day visit to India "to discuss efforts to raise global climate ambition and speed India's clean energy transition".