07 Sep 2021  by World Nuclear News
An experiment using neutrinos from China's Daya Bay and Ling Ao nuclear power plants has now been fully dismantled, China's Institute of High Energy Physics (IHEP) has announced. It was successful in measuring the interactions between neutrinos more accurately than ever before. 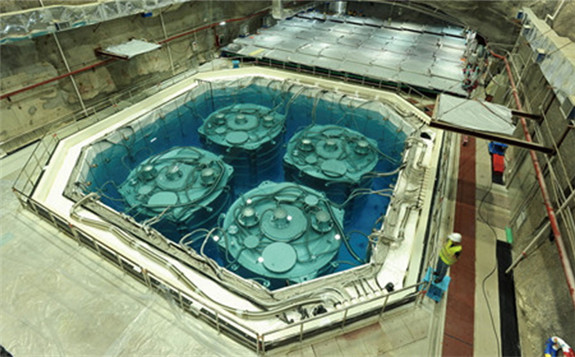 Known as the Daya Bay Neutrino Experiment, the multinational collaboration led by China and the USA had seen neutrino detection equipment placed within the steep hills behind the Daya Bay and Ling Ao power plants, which are only about 1 kilometre apart.

Shielded from cosmic rays by solid rock, the highly sensitive detectors counted the quadrillion antineutrinos that flow from each of the six identical reactor cores every second. A detector set was located near each of the plants, and another was further away, deeper under the hill, all connected by tunnels.

Neutrinos and antineutrinos each come in three 'flavours', and by comparing the differences in results from the near and far detector sets, researchers were able to determine what proportion of neutrinos vanished due to little-understood interactions between them. In 2012, Yifang Wang of IHEP said, "Our precise measurement will ... pave the way for the future understanding of matter-antimatter asymmetry in the universe."

The facility was wound up in December 2020, and its full dismantling was announced on 1 September. IHEP said, "The Daya Bay Neutrino Experiment started in 2003. After four years of planning, four years of construction, and nine years of operation, it had achieved all scientific goals and had completed its scientific mission."

The experiment's complex and valuable equipment was carefully taken apart for re-use. IHEP said some will be incorporated into the Jiangmen Underground Neutrino Observatory and some will be donated to other experiments in China and elsewhere. Some will be put on display in the National Museum and for public education at Daya Bay and the Jiangmen experiment.