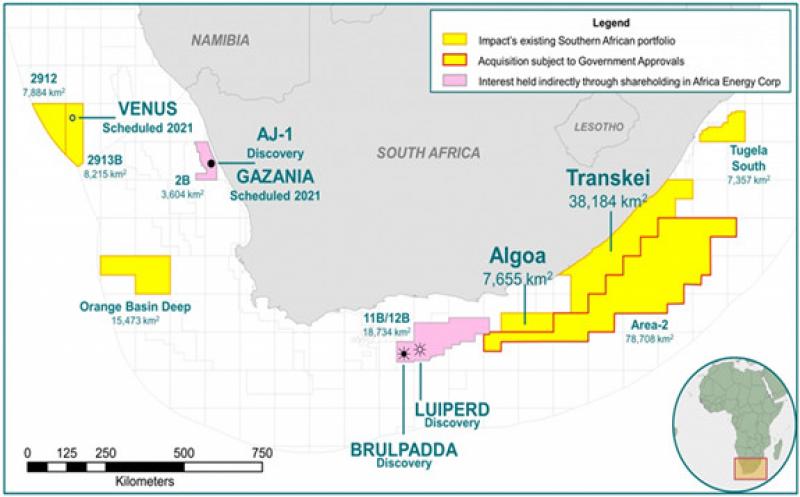 Impact Oil & Gas entered into the agreement with Shell for the farm-out of the South African exploration right back in November 2020.

Following completion of the deal, announced by Impact on Tuesday, both Shell and Impact hold a 50 per cent interest and Shell is the operator.

Impact also announced that the South African Government has granted the Second Renewal Period of the licence. This is a two-year exploration period that started in August 2021. Impact and Shell intend to proceed with the acquisition of approximately 6,000 km2 of 3D seismic during 2022.

Siraj Ahmed, CEO of Impact Oil & Gas, commented: “We are very pleased to have concluded this transaction with Shell; a world-class operator with deepwater expertise. We look forward to working with Shell to build on the considerable work done to date and further explore this exciting exploration province.

“This transaction, and the proposed 3D seismic acquisition programme, enables Impact to deliver on its objective of accelerating the exploration of the transform margin of the South African Natal Trough, which Impact believes has significant potential”.

Exploration Right 12/3/252, Transkei & Algoa is located offshore eastern South Africa and covers approximately 45,838km² in water depths up to 3,000 metres. The licence was initially awarded to Impact as a Technical Cooperation Permit in 2012, followed by an application for an Exploration Right, which was granted in 2014.

The Transkei block is situated north-east of Algoa in the Natal Trough Basin where Impact has identified highly material prospectivity associated with several large submarine fan bodies, which this joint venture will explore with focused 3D seismic data and then potential exploratory drilling.