China to Add 619 GW of Solar This Decade

Global solar powerhouse China is set to add 619 GW of solar by 2030, according to U.S.-owned Scottish data company Wood Mackenzie, with the analyst also predicting, in a statement about Asia Pacific, Indonesia will be the fastest growing solar market in the region. 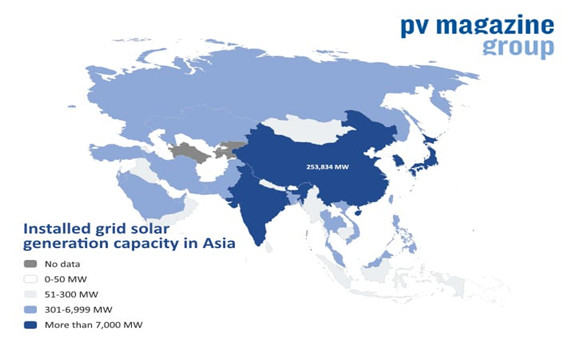 China will continue to show the way as the Asia-Pacific region sees the volume of installed solar capacity treble by 2030, to 1.5 TW, according to WoodMac consultant Xin Zhang.

India will add the second largest amount of solar this decade, followed by Japan, South Korea, Vietnam, and Australia, according to the note released by WoodMac yesterday, but it will be the Indonesian market that will be the fastest growing, from a small base of 300 MW today to an estimated 8.5 GW in nine years' time.

That rapid growth will be helped in large part by a $600 million loan given to state-owned electric company Perusahaan Listrik Negara by the Asian Development Bank last year to expand access to electricity.

India is set to miss its ambitious target of reaching 100 GW of installed solar generation capacity by next year, said Zhang, but it will rebound from its current Covid-induced slump to add an eventual 138 GW by the end of the decade.

Japan will be the region's third biggest market to 2030, despite high prices causing a slowdown in new installations. The nation will nevertheless add 63 GW of solar in the next nine years, keeping it ahead of the 58 GW expected in a South Korean market which WoodMac says is on the rise.

The feed-in-tariff-driven solar boom in Vietnam – which saw 5.5 GW of generation capacity installed in 2019 and a whopping 13.8 GW last year – will slow to 2026, as the subsidies are tapered down but will recover to add an expected 45 GW by 2030 as solar prices reach grid parity, the analyst forecast.

WoodMac has pointed to demand for green hydrogen as well as policies at state, rather than federal level as the reason Australia will add 23 GW of solar to the end of the decade.

The analyst's note said large scale projects will continue to account for 53% of the new capacity expected in China for the remainder of the 2020s but, elsewhere in the region, land constraints and increasing affordability will make small scale, ‘distributed-generation' systems more popular. Smaller household and business arrays of that type will supply more than 60% of the new capacity added outside China in the region by 2030, according to the analyst, ensuring 51% of the arrays added across the whole Asia Pacific region by that date will be small scale.

The installation of 1.5 TW of generation capacity across the region will see solar's share of the total power generation mix rise from 4% to 10%, in nine years' time, said WoodMac, with photovoltaics generating 20% of Australia's electricity by that date and 15% of Vietnam's.