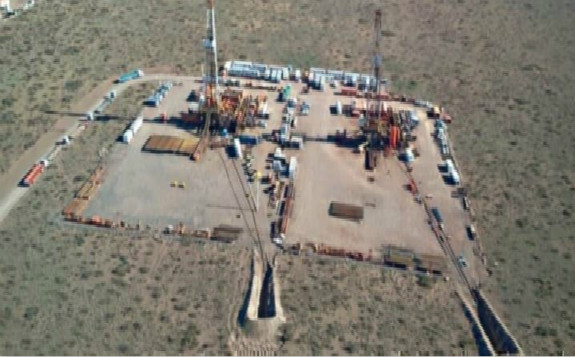 On Thursday, the regional news outlet in the Vaca Muerta, Rio Negro, reported that the “crisis in the oil industry escalated to higher levels” this week. Argentina’s partially state-owned YPF suddenly cut production by 50 percent at its Loma Campana oil field – the flagship project for the much-hyped Vaca Muerta shale – because demand collapsed and the company has insufficient storage for its oil.

Like many other countries, Argentina imposed a version of a lockdown order to contain the coronavirus pandemic, leading to an abrupt collapse in oil demand. YPF said that its fuel sales have declined by as much as 70 percent.

It’s a similar story playing out in many places around the globe – a sharp drop in retail fuel sales led to topped off storage levels, cuts at refineries, and ultimately to shut-ins at the well head.

As Rio Negro reported, the striking thing about the immediate cut in production at Loma Campana – which YPF operates jointly with Chevron – is the fact that the field is the one of the most competitive in Vaca Muerta. It is the most important unconventional oil field in Argentina and arguably the most significant in all of South America.

YPF’s Loma Campana is not the only field that could suffer immediate curtailments. Vista Oil & Gas has also been forced to cut output, closing at least eight wells. Vista staged a highly-anticipated IPO last year on the New York and Mexican stock exchanges and it is backed by a New York private equity company.

Meanwhile, Royal Dutch Shell, ExxonMobil and Pan American Energy (a subsidiary of BP) also cut production, although they have not made precise volumes public.

The Vaca Muerta was already on thin ice before the global pandemic and the Saudi-Russian price war. Last year, after then-President Mauricio Marci performed dismally in the Argentine version of a presidential primary, the country’s financial markets went into a tailspin. The peso plunged in value and inflation soared, forcing President Macri to freeze fuel prices to shield the country from the economic fallout.

The oil industry slammed on the breaks as a result, scrapping rigs and reducing the rate of fracking in Vaca Muerta.

The downturn was part of a broader economic recession and debt crisis facing Argentina, one that is now much worse because of the global pandemic. Just days ago, the Argentine government announced a delay of payments on $10 billion of domestic bonds, a move that some credit analysts say is tantamount to a default. A much larger negotiation over some $83 billion in debt looms, including the fate of the IMF’s largest bailout package in its history – a $57 billion loan initiated in 2018.

A cornerstone of Macri’s plan for growth was scaling up Vaca Muerta, a plan that was always riddled with risk. Argentina’s massive shale formation has enormous geologic potential, but it has a litany of problems that do not exist in Texas or North Dakota. Costs are higher. Infrastructure – pipelines, compressor stations, sand mines, export facilities, etc. – is woefully behind.

Then there is the macroeconomic instability, which is not a trivial matter. High inflation, a volatile currency, export taxes and a dismal near-term outlook has kept the oil majors from jumping in with both feet.

Argentina has essentially been trying to replicate the Permian boom, but without the advantages that exist in the U.S. – deep capital markets, extensive petroleum infrastructure, drilling technologies and mineral rights in the hands of landowners. If U.S. shale was built on debt and unprofitable drilling, the task for Argentina is substantially more difficult.

These problems have always plagued the Vaca Muerta. Macri’s plan included heavy subsidies for gas production, which succeeded in initiating a drilling boom. But it was a huge drain on the budget and ultimately was unsustainable.

All of that is to say that the outlook heading into 2020 was pretty negative to begin with. The number of frac stages fell from 676 in August to just 346 in January. The new President Alberto Fernandez has waffled on a new strategy to revive drilling, and ultimately has not offered anything new.

Now with a pandemic sweeping across the globe and oil markets in disarray, the wheels are coming off. The Argentine oil industry is pressing the government to subsidize prices, offering a guaranteed price in the mid-$50s per barrel. The government has suggested that it could consider a price in the mid-$40s, but has not agreed to anything as of yet, Buenos Aires-based journalist Fernando Heredia told Oilprice.com

But another round of subsidies carries the same risks as before. “A Macri-like approach to foreign companies is certain death,” IEEFA said in a December report. “The new administration would be well-served to learn from the decade-long financial failure of unconventional production in the U.S., despite impressive production gains.”

Where the international oil majors have dabbled in the Vaca Muerta, YPF has been the anchor, the main driver of drilling. In March, YPF executive president Daniel Gonzalez issued an internal warning of “very difficult” times ahead. “We have stopped drilling and completing wells. We are wrapping up leaving the last new wells and equipment in a safe condition,” the executive said in March.

The cut in production at Loma Campana is a new stage of crisis for the company, and for the Vaca Muerta shale as a whole.