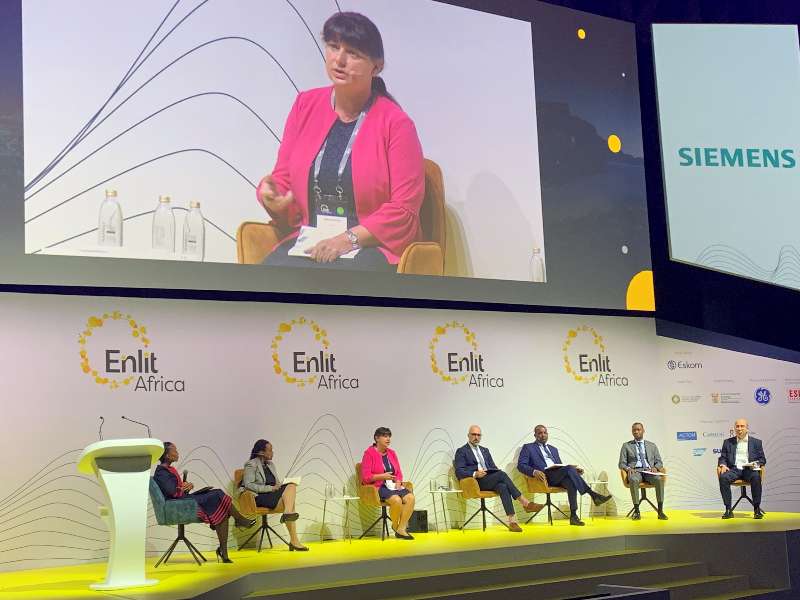 (Sabine Dall’Omo was part of an international panel discussion just energy transition investments in Africa as part of the Enlit Africa conference.)

Contributing to global net-zero goals is vital for African countries to attract global investors, according to Sabine Dall’Omo.

The chief executive of Siemens Southern and Eastern Africa said that African countries have a key role in contributing to climate change solutions – but they need to be seen to take action at home first to entice investors.

“We [private companies like Siemens] have all signed up to net-zero commitments,” Dall’Omo told an audience at Enlit Africa in Cape Town, adding that investors want to see this kind of commitment in African countries too.

Dall’Omo made it clear that if a country wants to attract international investors like Siemens, governments need to make sure the grids and power generation, the entire electricity value chain, are based on renewable resources.

In order to drive decarbonisation on the continent, it is vitally important to attract and keep investors at a time when large amounts of clean energy investment will be needed for a green transition.

Africa’s role in unlocking solutions to climate change lies in its abundance of renewable resources. However, governments need to make a commitment to developing those resources in a way that fosters investment and promotes bankable projects.

A recipe to secure investment

However, there is more to it than just net-zero commitments.

Said Dall’Omo: “If you want to achieve an investor-friendly situation, you need two things: you need to have power all the time, no load shedding; and you need renewable power.”

Investors are not attracted to a country where the utility does not provide the basic service, where the grid is not managed, or have businesses turning to diesel generators to keep the lights on, she emphasised.

“Investors are attracted to a country that embraces a better rule of law and where society is embracing payment for infrastructure.”

Even though South Africa is behind the curve concerning power supply and grid stability, Dall’Omo suggests that the fact that President Ramaphosa and his team are business orientated and are showing progress on sector reform stands the country in good stead.

Important steps such as the Just Energy Transition partnership commitment made at COP26 in Glasgow, South Africa’s hydrogen development plan and the recent 100MW threshold for independent power generation are good investor signals, according to Dall’Omo.

“The 100MW threshold decision will enable positive benefit on the government’s ESG communication to stakeholders and investors, because [investors] are looking for that. You can’t come with greenwashing, proof is needed.”

Optimising the African investment climate is even more important now that Europe is experiencing an energy crisis.

“The Ukraine war and the COVID-19 crisis have shown that no one wants to be dependent on one resource. This will fast track the transition and the development of cost-effective technologies, technologies that can be deployed in Africa.

“Companies will also be diversifying their supply chain and looking to countries that are not already super powers for [power] production.”

This could be a significant opportunity for Africa to fill many gaps across Europe, suggested Dall’Omo.