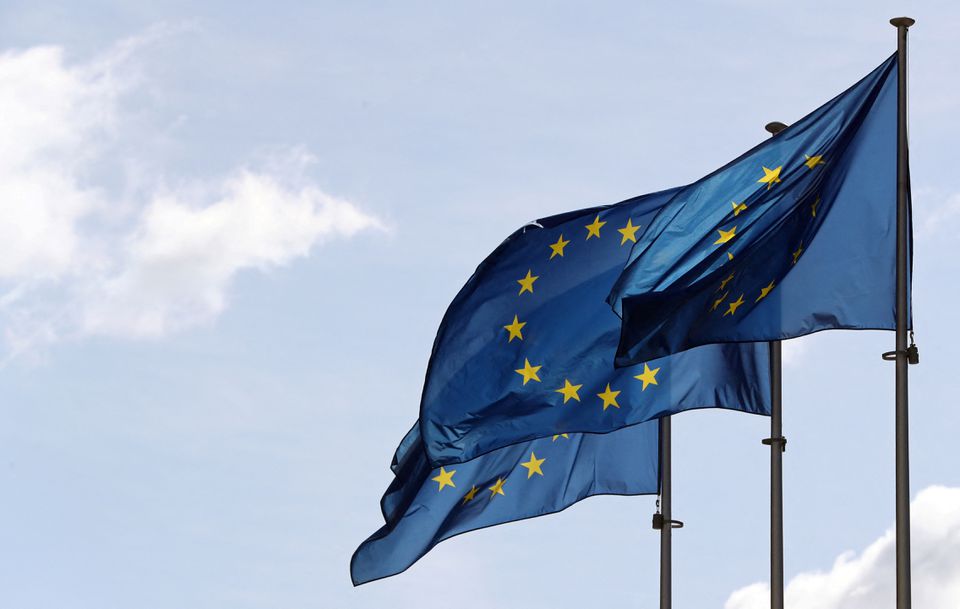 The European Union flags flutter ahead of the gas talks between the EU, Russia and Ukraine at the EU Commission headquarters in Brussels, Belgium September 19, 2019. REUTERS/Yves Herman

Most European Union countries have boosted their renewable plans since 2020, putting them on course to cut fossil fuel use this decade as the energy and COVID-19 crises have spurred, not derailed their green transition, researchers said on Thursday.

Soaring energy costs and supply shocks triggered by the Russia-Ukraine conflict have prompted some countries to burn more coal and buy up non-Russian gas, raising fears this will undermine efforts to fight climate change.

An analysis of EU countries' climate policies suggests, in the longer run, the opposite should be true.

Of the EU's 27 member countries, 17 have increased their plans to increase renewable energy since 2020, think tanks Ember and the Centre for Research and Clean Air said.

If achieved, the countries' latest plans would see 63% of EU electricity produced from renewables by 2030, up from 55% under their 2019 policies, the researchers said.

"Europe is not coming back to coal or to gas to ensure security, it's the actually the opposite. Countries are accelerating renewables," Ember senior analyst Pawel Czyzak said.

Germany and the Netherlands both hiked their renewable energy goals this year, while countries including Austria, Greece and Ireland have raised theirs since 2020. Bulgaria, Croatia, Slovenia and others set coal exit dates, and France offered renewable home heating subsidies.

That is before counting the EU's own plans, unveiled last month, to raise investments in renewables and energy savings to wean countries off Russian fuels.

Other analysts have said European governments' plans to pursue new gas projects could undermine these green efforts, however, and many nations have not prioritised green investments in their spending since the COVID-19 pandemic.

"The recovery has been wildly inconsistent around the world," said Brian O'Callaghan, lead researcher at Oxford University's Economic Recovery Project, pointing to Australia, China and India as having relatively small shares of green COVID-19 recovery spending.