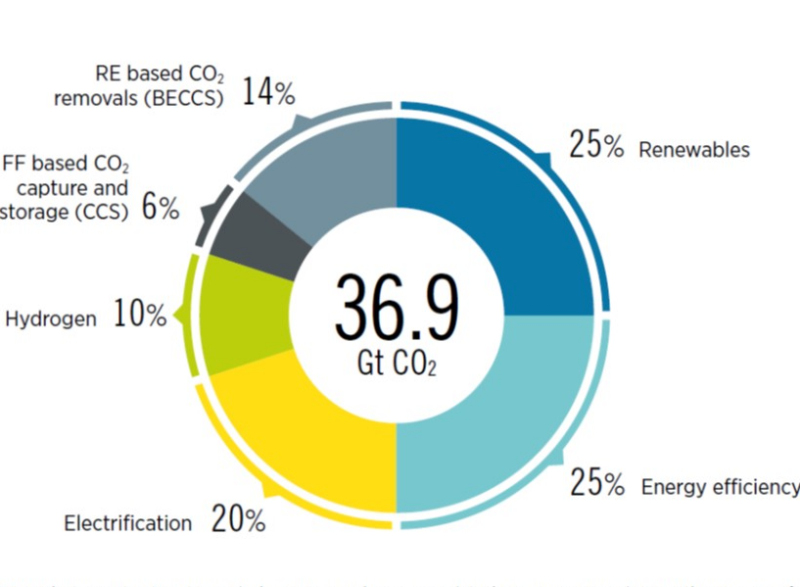 The Outlook 2022, the second edition, reports that despite progress the energy transition is far from being on track to 1.5oC and that progress over the next eight years to 2030 will be “critical” to accelerating its trajectory.

According to the Outlook a ramping up of renewables, together with an aggressive energy efficiency strategy, is the most realistic path toward halving emissions by 2030.

The decarbonisation of end uses, which is described as the “next frontier” after renewables and has lagged, also needs to make much faster progress.

Underpinning these, a comprehensive set of policies is needed to achieve the necessary levels of deployment by 2030 and to maximise the benefits.

The 1.5oC pathway positions renewables, energy efficiency and electrification as the main drivers of the energy transition, followed by hydrogen and carbon capture and storage.

Together, they could achieve a cut of nearly 37Gt of annual CO2 emissions by 2050.

“Anything short of radical action in the coming years will diminish, even eliminate chances to meet our climate goals,” comments Francesco La Camera, Director-General of IRENA.

“Eighty per cent of the global population lives in countries that are net importers of fossil fuels. By contrast, renewables are available in all countries, offering a way out of import dependency and allowing countries to decouple economies from the costs of fossil fuels while driving economic growth and new jobs.”

The Outlook 2022 points to the ongoing replacement of coal power with clean alternatives as vital, with the phasing out accompanied by measures to eliminate market distortions and incentivise energy transition solutions.

Infrastructure upgrades, modernisation and expansion also are needed to increase resilience and build flexibility for a high share renewables based system.

● Green hydrogen should move from niche to mainstream
● Modern bioenergy’s contribution to meeting energy demand, including demand for feedstock, will have to triple
● The majority of car sales by 2030 should be electric
● All new buildings must be energy efficient and renovation rates should be significantly increased
● Demand side management would help alleviate multiple challenges in the short term while contributing to the long-term security of energy and materials supply
● Increasing ambition in national energy plans and in the Nationally Determined Contributions made under the 2015 Paris Climate Agreement must be firm enough to provide certainty of direction and guide investment strategies.

The Outlook also notes achievement of universal access to modern energy by 2030 as a vital pillar of a just and inclusive energy transition aligned with the 1.5oC goal.

The investment needs are estimated at $5.7 trillion per year until 2030 including the imperative to redirect $0.7 trillion annually away from fossil fuels to avoid stranded assets. The priorities also are estimated to add 85 million jobs worldwide in renewables and other transition-related technologies between today and 2030.