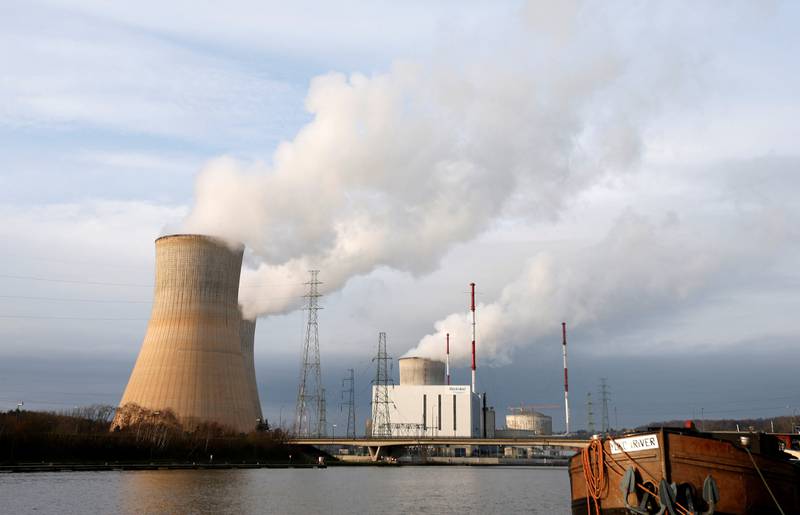 The nuclear plant belonging to Electrabel, the Belgian unit of French company Engie, at Tihange in Belgium. Reuters

Belgium on Friday delayed by a decade a plan to scrap nuclear energy in 2025, worried by the rise in energy prices caused by the Russian intervention in Ukraine.

“The federal government has decided to take the necessary steps to extend the life of two nuclear reactors by 10 years,” Prime Minister Alexander De Croo said in a statement.

“This extension will strengthen our country's independence from fossil fuels in a turbulent geopolitical environment,” he said.

The push to 2035 came as calls grew louder for Germany, Europe's biggest economy, to rethink its nuclear energy exit.

Ministers in Berlin last week doubled down on their country's no atom pledge despite the price shock.

Europe is looking for ways to wean itself off its energy dependency on Russia, which provides 40 per cent of Europe's gas needs, mainly to Germany, Italy and several central European countries.

Prices to Europeans have shot up since the invasion by Russia of Ukraine, and EU leaders will meet next week to agree on more emergency measures to soften the blow for consumers and businesses.

The promise of a phase-out of nuclear power has been enshrined in Belgian law since 2003 and the decision to again delay the moratorium was resisted by the Greens party.

In Friday's plan, which was negotiated during a marathon Cabinet session, the government agreed to extend the operating lives of the Doel 4 reactor near the port city of Antwerp and Tihange 3 near Liege until 2035.

Mr De Croo said that the decision would give the country certainty after years of quarrelling over the wisdom of the nuclear exit.

“For too long our country has lacked vision,” Mr De Croo told a news conference. “This has caused a lot of uncertainty. The plan we have on the table today responds to that lack of vision.”

The government must negotiate with French energy company Engie, owner of the nuclear power plants in Belgium, on the costs and delivery of the new plan.

Engie had previously indicated that it was too late for Mr De Croo's government to change its mind.

The government also said that the two reactors in any case will not be available for the winter of 2025.

The Greens made an exit from nuclear power in 2025 a condition of a fragile seven-party coalition that was cobbled together in 2020, more than a year after inconclusive elections.

But since the February 24 invasion of Ukraine, with the surge in energy prices, the party said it would agree to consider an alternative scenario.

There have been protests against two older reactors – Tihange 2 and Doel 3 – in Germany and other neighbouring countries since experts found thousands of hairline cracks in the reactor pressure vessels in 2012.