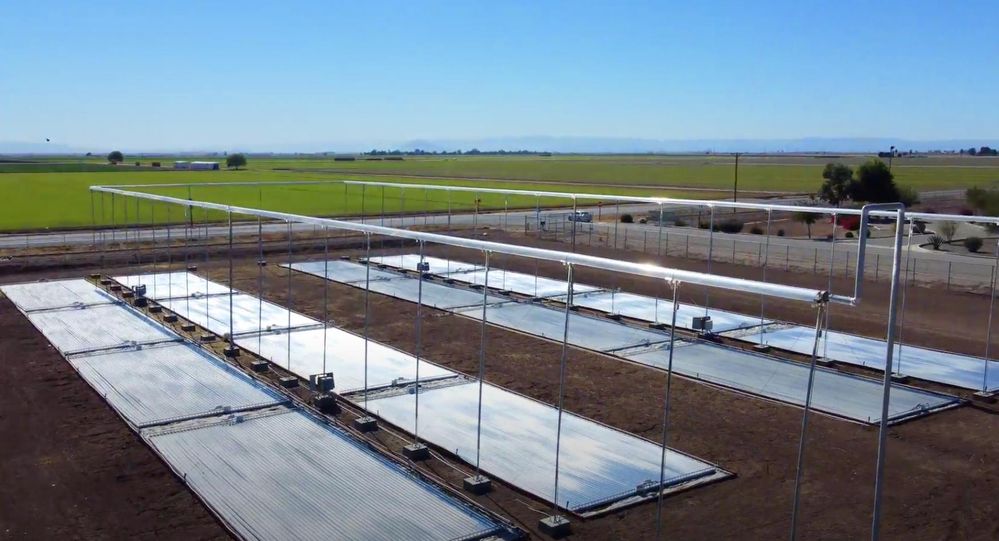 One of the main impediments to harnessing solar energy is storage. Solar batteries work as a short-term solution, but not when it comes to long-term storage or to power, say, an entire city. A possible answer, though, might lie in oil wells. The California-based Hyperlight Energy will be piloting an installation where they plan to use existing oil wells as solar thermal wellsprings, with the stored energy being converted back to clean electricity when required.

Solar energy and oil wells might sound like an odd combination, but the principle is similar to how geothermal energy would be harnessed. The idea, says Daniel Codd, a researcher in renewable energy systems at the University of California, San Diego, is to store solar-produced heat in rock formations below the surface, creating a solar-charged geothermal resource in which heat is stored for meaningful durations.

“Thermal energy storage is a known low-cost, low-risk approach for storing solar energy in the form of heat,” adds Codd. “This heat can be stored in reservoirs and dispatched when needed, either for thermal needs or to drive a power cycle to produce electricity.”

Hyperlight claims that its storage system, called Tectonic Sun, could provide emissions-free electricity with an 80 percent capacity factor 24 hours a day, 7 days a week, 365 days a year. This is based on an analysis by Hyperlight’s partner, the National Renewable Energy Laboratory (NREL), showing that a hybrid renewable-energy system combining geothermal storage with solar can “provide low-cost dispatchable power at various timescales from daily, to weekly, to seasonally.”

To harness the sun’s heat, the company will use its concentrated solar power (CSP) solution, called Hylux, which comprises inexpensive, lightweight modular plastic parts rather than the traditional steel and concrete.

“We use extruded plastic D-profile pipes, with mirrors on the flat side of the D, that just rest on the ground,” says Nicholas Kramer, cofounder and engineering head of Hyperlight. “They roll throughout the day to track the sun and concentrate it onto a linear receiver, and then we run a thermal oil through that receiver, and it gets very, very hot.” This system results in a lower capital cost and a lower levelized cost of energy compared to other CSP technologies, he adds.

Tectonic Sun combines the Hylux CSP system with underground thermal storage. “So during the summer, when you are generating more than you would need in the winter, you put that extra surplus energy downhole in the form of steam to heat up an underground reservoir,” Kramer says. “With the solar that you use every day of the year, you put that into high-temperature, short-term storage in the form of thermal oil or molten salt or any of the existing CSP thermal-storage technologies.” During winter, he adds, they can pull up the energy and generate zero-carbon electricity based on the demand curve. 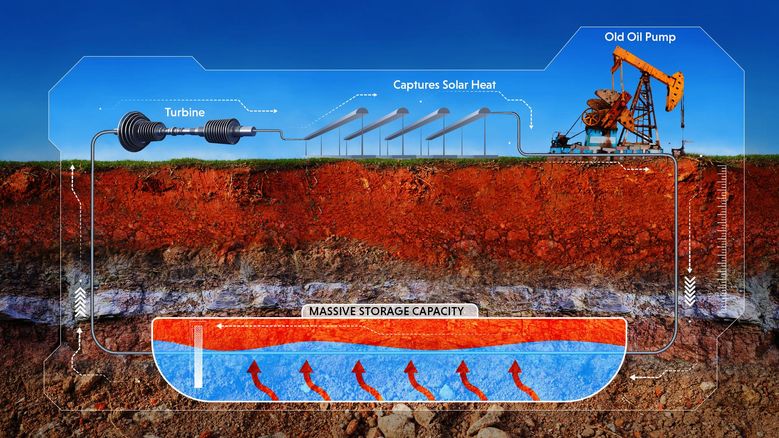 The company is building a demonstration plant at its alpha site with the oil company Hathaway at Bakersfield, Calif., to test the concept for the first time.

Alongside storing solar energy and generating on-demand clean electricity, the Tectonic Sun system also decarbonizes oil wells. “We can replace their natural-gas boilers with our CSP system, and reduce the carbon intensity of the oil that they pump out of the ground,” says Kramer. “You know that that oil is going to be consumed; we’re not going to switch to a fossil-free world overnight. But we can still reduce the carbon [cost] of that oil.”

Solar energy is a low-power-density resource, meaning relatively large areas are needed to collect and convert sunlight, Daniel Codd points out. Therefore, regardless of the conversion technology, at large scales solar infrastructure has to be low cost per unit area. “New approaches must be de-risked and proven at appropriate scales prior to securing commercial funding for a large plan,” says Codd. “This can imply a long road to commercial success.” Government funding and industry partnerships can support solar technology developers along this path, he adds.

For Hyperlight, the California Public Utilities Commission energy transition plan from 2021, requiring 11.5 gigawatts of clean energy in the next five years, is timely. Even though this is a first-of-its-kind project, all of the individual components of the technology have been tested extensively for decades, says Kramer. “We’re just going to combine them, so we think that the technical risk is pretty low.” Geothermal energy storage could be a viable solution to increasing renewable-energy penetration on the grid to 100 percent, he adds, provided there is regulatory buy-in.

There are currently about 6 cubic miles of underground oil reservoirs that are being used for enhanced oil recovery in California that could potentially be good sites for Hyperlight’s technology, Kramer says. “If we employ this [in] those oil reservoirs, to heat them up to the level that enhanced oil recovery is currently heating them, they have the storage capacity of 1 billion Tesla Powerwalls.” 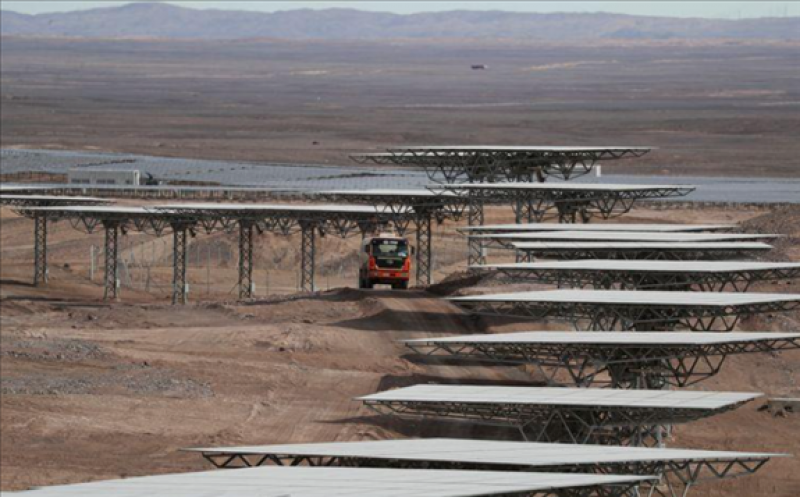 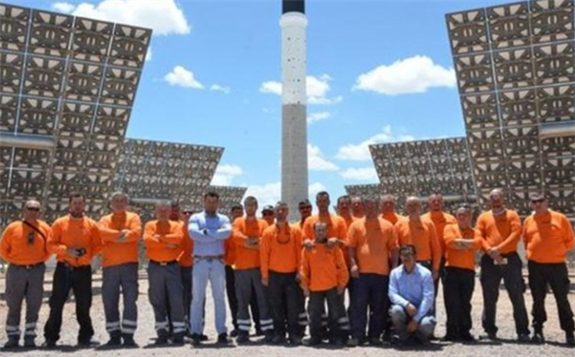 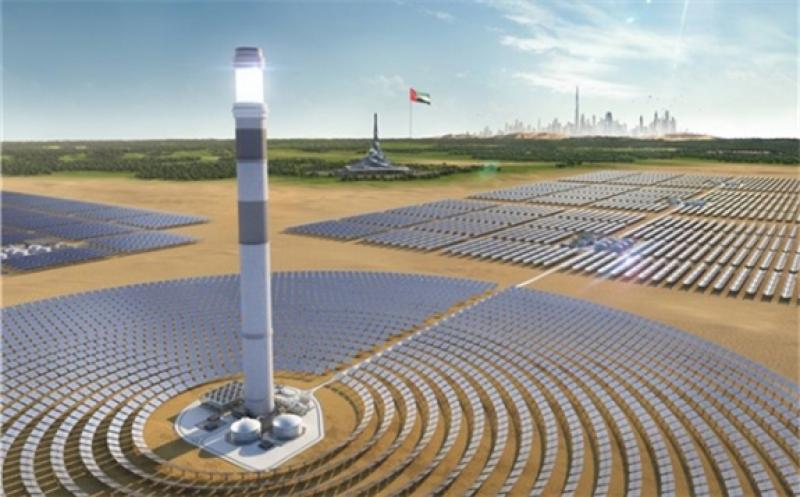