Wind Energy Could Cut Global Warming by Up To 0.8 Degrees C

13 Mar 2022  by evwind.es
The amount of wind that blows across the planet could fulfill the world’s electricity demand many times over. 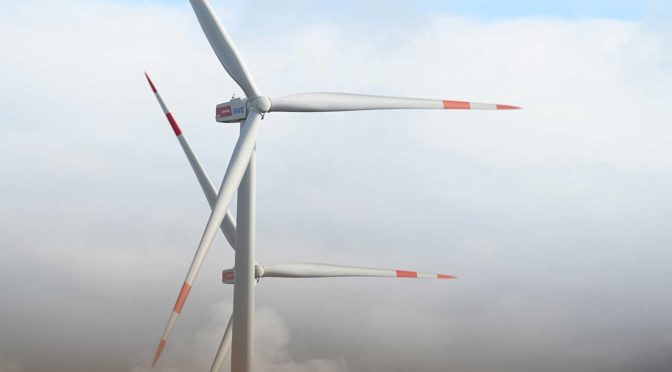 Yet 63.3 percent of the world’s electricity was still derived from fossil fuels in 2019, mostly from coal and gas, and this contributed significantly to the roughly 33 gigatonnes of carbon dioxide emitted that year.

According to a recent study, wind energy could play a more prominent role in averting the climate crisis than it does now. As the world aspires to the Paris Agreement’s goal of keeping global warming well below 2 degrees Celsius, the study found that expanding the world’s wind energy generation capacity could reduce global warming by 0.3 to 0.8 degrees Celsius by 2100.

Wind energy has grown substantially in the past two decades – the study’s authors determined that wind energy generation capacity grew by around 14 percent annually from 2006 to 2020. But nevertheless, realizing its potential for climate change mitigation would entail a rapid increase in wind energy infrastructure, capitalizing on the resource’s widespread availability and falling installation costs.
Rebecca Barthelmie and Sara Pryor, professors at Cornell University and the authors of the study, were curious as to how much wind energy expansion could be accelerated if governments made it a priority, rather than mainly relying on market forces to drive this growth.

Country counts
According to the International Energy Agency, wind energy generated nearly 6 percent of global electricity in 2020. The year saw a record 93-gigawatt increase in wind energy generation capacity, with around three-quarters of it coming from China and the U.S.

The E.U. plans to cut its carbon emissions by at least 55 percent by 2030 and to achieve carbon neutrality by 2050. WindEurope has reported that Europe also plans to add 15 gigawatts of wind energy infrastructure annually over the next five years, but to achieve its 2030 goals must raise this to 27 gigawatts per year. Meanwhile, the U.S. achieved its 2020 goal of having installed 113 gigawatts in total, and plans to have cumulatively installed 224 gigawatts by 2030 and 404 gigawatts by 2050.

China plans to have its emissions peak by 2030 and to achieve carbon neutrality by 2060. To this end, it installed 45.4 gigawatts of wind energy infrastructure last year (not including the installations at the end of 2019 that were only grid-connected in 2020).

Despite currently being the economy with fourth-highest greenhouse gas emissions (including the European Union), India currently has no net-zero timeline in place, and the country last year raised its wind energy generation capacity by only 1 gigawatt to a total of 39 gigawatts. Nevertheless, the GWEC reported that India is expected to add 20.2 gigawatts of wind energy capacity between 2021 and 2025.

While wind power has been on the rise in recent years, some obstacles remain that could hinder its development. Global changes in wind currents due to climate change could possibly affect the availability of wind resources. However, wind is naturally variable – even across decades – and research on this topic is lacking.

Given the rising demand for wind energy, bottlenecks could appear along the manufacturing supply chain. It might be difficult to quickly establish an adequate supply of certain raw materials needed for wind turbines, such as copper and dysprosium, unless future designs work around these materials. Manufacturing capability and human resources will also have to scale up to meet growing wind energy demands.
Barthelmie added that the permitting process can also be quite complex and should be streamlined.

“You need to organize ships, and you’ve got to have wind turbines delivered, and have personnel, and have the weather on your side if you go offshore,” she said. “It’s quite a complicated process. I think we could tackle some of the permitting side just to make it more transparent, straightforward and equal.”

However, technological advancements are expected to make wind energy even cheaper and to allow more use of offshore wind resources, such as by expanding the use of floating offshore wind infrastructure for areas with deeper waters. The study authors note that the low price of energy from this renewable source has already been an incentive for investing in this type of energy production.

Barthelmie does not consider the current pace of energy decarbonization – such as by developing more wind energy capacity – to be sufficient for keeping global warming below 2 degrees Celsius. Nevertheless, she described electricity decarbonization as a “low-hanging fruit.”