24 Feb 2022  by naturalgasintel.com
France plans to build at least six nuclear reactors, and possibly another eight, under the latest national low carbon strategy unveiled by President Emmanuel Macron earlier this month. The strategy is designed to eventually replace fossil fuels like natural gas with nuclear and renewables to achieve the country’s 2050 net zero target. 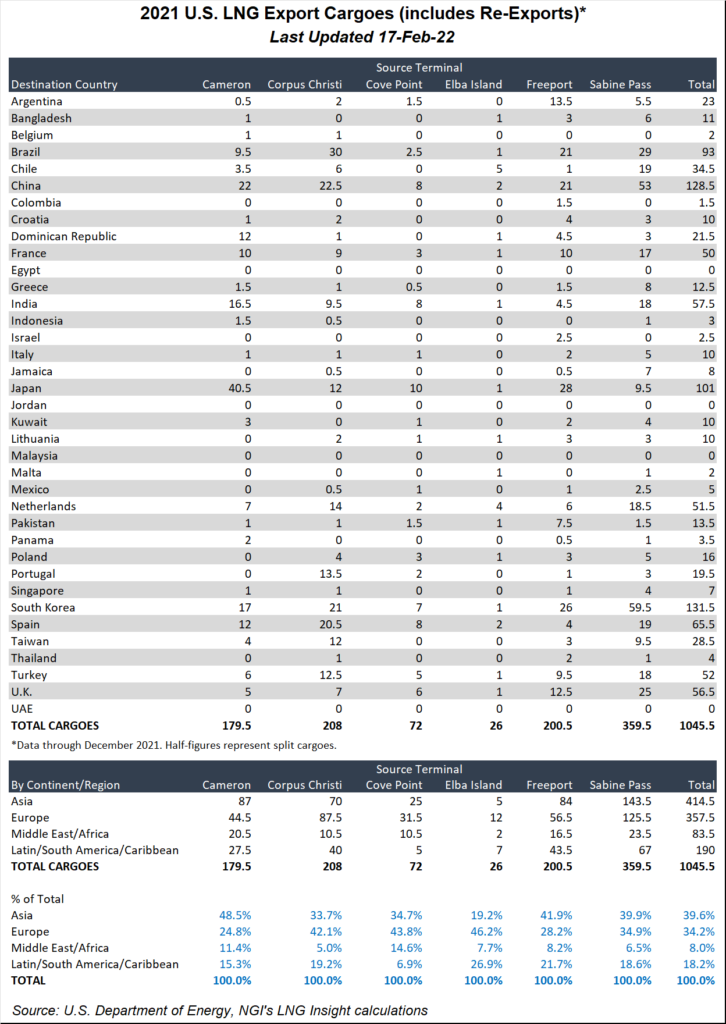 Six European Pressurized Reactors (EPR) at a cost of 50 billion euros are to be built at existing sites by state-owned utility Électricité de France (EDF), which operates all of France’s nuclear reactors. Construction is slated to begin in 2028, with the first set to start service in 2035. The goal is to produce 25 GW by 2050. A study to build another eight reactors is planned, Macron said.

“Even 14 new nuclear reactors will not be enough to replace France’s aging nuclear power plants, Rystad Energy’s gas and power analyst Fabian Rønningen told NGI. “Additional new capacity is needed and existing reactors, many of which are 40 or more years old, would have to have their lifetimes extended. Otherwise, nuclear is projected to play a reduced role in the French and European power sector from 2030 onwards.”

Macron, who is up for re-election in April, made a U-turn on his support for nuclear, as he had pledged four years ago to reduce France’s reliance on nuclear power. France supported a recent European Commission proposal to classify gas and nuclear as green investments. Nuclear energy currently provides about 70% of the country’s power mix, with renewables at 20% and fossil fuels around 9%.

A week after Macron’s speech, the French government said it would invest 2.1 billion euros in EDF as the company is facing delays and budget overruns on new nuclear plants in France and Great Britain. The state aid would also help ease a financial shortfall on the company’s balance sheet caused by nuclear outages related to operational issues and the government’s order to sell power below market prices.

EDF recently forecast for the second time reductions in France’s domestic nuclear output for this year and 2023 because of problems with aging reactors. This reduction is estimated to be the equivalent to about 12% of France’s total power mix.

France is also a major European electricity exporter. The nuclear outages have helped push natural gas prices on the continent higher in recent weeks along with a variety of other factors.

“The share of nuclear in the European power mix has been stable at above 20% of total generation for the last 30 years and, together with coal, the two have represented by far the largest sources of electricity in Europe. France is a big electricity provider in Europe,” Rønningen said. He added that a reduction in French nuclear production would impact not just France, but the “entire generation balance in Europe.”

The reason behind EDF’s latest projections on reduced output was the discovery of corrosion and cracked pipes in several out-of-service reactors. EDF plans to inspect all 56 of France’s aging units this year and next. France’s Nuclear Safety Authority agreed in 2021 to extend the lifetime of 32 of the oldest reactors by up to 50 years.

Macron said he is also counting on renewable energy to fill the nuclear power gap as it takes 15 years to build a reactor. This strategy includes building 50 offshore wind farms to generate 40 GW of power by 2050. France also plans to increase its solar power capacity to generate over 100 GW of power by 2030.

How Much NatGas Does France Produce?

France’s domestic natural gas production is negligible, and it is dependent on pipeline and liquefied natural gas (LNG) imports. France imported 45.4 billion cubic meters (Bcm) of gas in 2020 – 19.6 Bcm from LNG and 25.7 Bcm via pipeline from the Netherlands, Norway and Russia, according to BP plc’s latest Statistical Review of World Energy.

Currently, around 40 TWh of electricity in France is generated by natural gas in a normal year. That translates to roughly 7 Bcm of gas demand, Rønningen told NGI.

In 2022 and 2023, France is likely to struggle to produce enough electricity for domestic and foreign use because of the nuclear outage issues and maintenance problems, according to Rystad.

“France needs to use more gas for their own domestic power in the short term, as it has the room for increasing the utilization of their gas plants,” Rønningen said. “The utilization of gas plants in France is low. On a yearly basis, the average is 30-40% for the past few years.”

If LNG imports are needed to help meet increased gas demand, that will depend on the availability of regasification capacity. Elengy operates three of the four French LNG import terminals.

In 2019, Elengy said the 8 million metric tons/year (mmty) Montoir-de-Bretagne terminal was fully booked from 2023-2035. Since January 2021, Fos Cavaou’s regasification capacity has increased to 6.8 mmty, with plans to offer additional capacity, which could increase Fos Cavaou capacity to 8 mmty in 2024 and to 9.6 mmty in 2030. Elengy’s third terminal, Fos Tokin has 2.4 mmty capacity.

The 9.6 mmty Dunkerque LNG import terminal recently offered 3.5 Bcm of available regas capacity for a minimum of three years between 2023 and 2036.

“Putinjoki” painted over the road sign on entering Pyhäjoki municipality where construction of the Russian designed reactor is planned. (Thomas Nilsen / The Independent Barents Observer)

Although construction work at the site of the proposed new nuclear power plant in Pyhäjoki in northern Finland is in full swing, developments in Ukraine could bring the project to a halt.

Final approval for the 1200 MW Russian-designed project — which is being built by Fennovoima, but will be partly owned by Rosatom, Russia’s state nuclear corporation — has yet is granted by Finnish authorities.

On Tuesday, Prime Minister Sanna Marin told news agency STT she believes a new risk analysis should be conducted for the project.

Minister of Economic Affairs, Mika Lintilä, told Helsingin Sanomat that Russia’s actions in recent days have led to a need for an even stricter assessment of the conditions for the implementation of Fennovoima’s nuclear plant.

The Russian-Finnish consortium had hoped to obtain approval this year from the government to construct the plant that has been delayed by several years.

Lintilä said Russia’s actions by recognizing the independence of the rebel regions in eastern Ukraine and sending military troops into the region will affect the criteria used to assess the overall safety of the power plant.

“It is quite clear that this will significantly raise the bar for discretion,” Lintilä said.

In addition to providing the reactor itself, Rosatom is co-financing the construction of what would be Western Europe’s northernmost nuclear power plant.