14 Jan 2022  by World Nuclear News
Ukraine's Energoatom would like to license Westinghouse's AP1000 technology after the initial five units that are already being planned, the company's CEO, Petro Kotin, said in an interview with EnergoBusiness magazine. Energoatom is currently weighing up its options for suppliers to its programme. 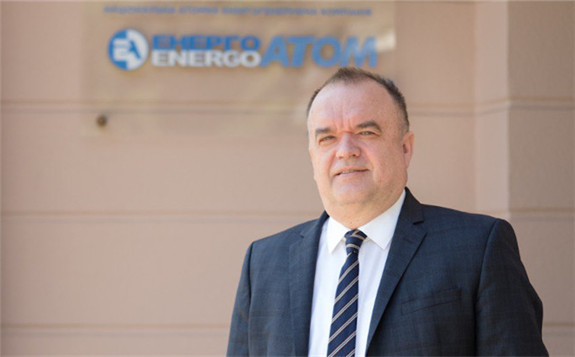 In an interview reproduced on Energoatom's website, Kotin underlined that the company has already carried out long-term operation work at 12 of its 15 reactors, and that the company needs to be prepared for their potential retirement after around 2040. At that time, the reactors will have been in operation for about 60 years. Energoatom has determined that it needs to commence a new build programme of 14 new units, Kotin said.

The first part of this plan is being put in place now, with two main components. First is the completion of Khmelnitsky 3, which is a VVER-1000 unit on which construction stalled at 75% completion in 1990.

Kotin said that "we can signficantly reduce the cost of the project" using "available equipment". However, "it is necessary to conduct an audit" and a "gap analysis and identify all that is missing". The concrete structures of Khmelnitsky 3 are sound, Kotin said, whereas there is a list of repairs that needs to be made to the exposed metal which has "stood in the open air for 32 years".

Energoatom faces a significant design choice over Khmelnitsky 3. The buildings there were sized for a high-speed turbine that would have been supplied by Power Machines of Russia. Today, the Ukrainian supplier Turboatom produces low-speed turbines that would not fit the buildings.

Kotin said that, "In this case there are two solutions: either we find a high-speed turbine [from another supplier] ... or partially demolish the foundation and use a Turboatom turbine. We are now comparing these options."

The major portion of replacement build is expected to come using Westinghouse AP1000 technology, according to a contract the companies signed in September last year. First would be a new AP1000 at Khmelnitsky. This fourth reactor at the site would re-use the existing basemat, poured for a VVER-1000 in 1987. However, Energoatom also has decisions to make regarding suppliers for this.

Kotin said: "Turboatom is a Ukrainian company and it would be desirable to have our own steam turbine. At the same time, foreign manufacturers can produce everything at once - the turbine, generator, and excitation system. With all this equipment on one shaft you can optimise the vibration of the whole unit and everything can be optimised for efficiency."

He said Energoatom had talked with GE, Doosan and Toshiba as well as Turboatom.

A Ukrainian engineer is likely to be the main contractor for AP1000 work, Kotin said, based on a competitive tender. Westinghouse would be technology provider with "responsibility for the reactor island," said Kotin. "Ours would be the turbine hall. Electrical equipment will also be under the control of an American partner," he said.

"A complete list of all equipment and its supply chain must be compiled" for the AP1000 projects, said Kotin, noting that "large equipment is manufactured in South Korea. For example, the reactor vessel, steam generators and a number of other equipment are made by Doosan."

Energoatom also has the option to use ready-completed AP1000 modules that were originally made for the cancelled units at the VC Summer plant in the USA. In September 2021, Kotin toured the South Carolina warehouse in which these are stored. At the time, Kotin said: "The complete set of parts for the reactor island is available ... we will be able to significantly reduce the construction time of [Khmelnitsky 4], as we do not need to spend time on the production of this equipment."

Kotin did not specify where the further four AP1000s would be.

"We expect the financing of the project will be provided by the US ExIm bank," said Kotin. "One unit costs about USD5 billion," he said, noting that "the final cost may vary, depending on the infrastructure" and that multiple builds at the same site reduces cost. "The loan is planned for a long term (18 years) and it will be repaid after the power unit being operation," Kotin said.

Given that Energoatom's goal of 14 new reactors includes one VVER at Khmelnitsky 3, one AP1000 at Khmelnitsky 4, and then four further AP1000s, there are still eight new units that remain unspecified.

"Our idea," Kotin revealed, "is to follow a similar path" to China and South Korea by licensing Westinghouse technology, developing it further and creating a technology that can be exported.

"How did the Chinese do it? They acquired a licensc for AP1000 technology from Westinghouse. According to the licence, they do not have the right to build the same power units for export, but they have mastered it, learned it and continue to build it in China on their own," he said. "The first two AP1000 units they built with the Americans, the third and fourth they are already building themselves. Based on this experience, China has created its own project - the CAP1400 design."

China "increased capacity and went beyond the Westinghouse licence and can sell the reactor for export. Our idea is to follow a similar path," said Kotin, noting that South Korea had "followed the same algorithm" beginning in the late 1970s.

In Kotin's view, Ukraine is ready to change its whole nuclear sector. "We can do that," he said, "because we are in a different environment than any other European country."

"We used to build all this, we have 15 reactors, there are specialists, there are grandfathers who built all this with their own hands," said Kotin. "We have large institutes that train specialists," which other countries do not.

"Unfortunately, the Chernobyl catastrophe happened, but it gave us a lot of experience in dealing with the consequences of the accident, management of radioactive waste, and we created new safety standards," said Kotin. "With all this experience, who but us can take responsibility for the safe development of the world's nuclear industry?"