Cengiz Enerji is collecting wind data in the vicinity of its hydro-solar hybrid power plant Lower Kaleköy in eastern Turkey with the ambition to expand the facility with another electricity source. Hybrid power plant projects are springing up all over the country. 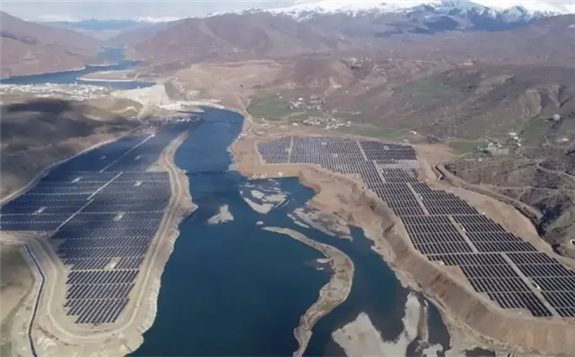 The combined size of applications for the construction of power plants in Turkey that are planned to be added to systems that use other sources are approaching 1.5 GW, Deputy Minister of Energy and Natural Resources Abdullah Tancan. Hybrid power plants bring savings in grid and storage costs for the investor, as integrated management enables the operator to provide a steadier supply to its clients.

The emerging technology of combining different sources got a boost with the development of renewable energy. Hydropower plants usually have space for photovoltaic facilities.

Combining wind and solar is particularly effective, as wind turbines produce electricity at night, as there is no sun, and in wintertime, when solar output is weaker. Power plants become hybrid also when they add batteries or hydrogen-based systems. There are also examples of complementing renewable energy with facilities that run on gas or other fossil fuels.

Cengiz Holding recently put the largest hybrid power plant in Turkey online and it says it is the biggest in Europe as well. The Lower Kaleköy (Aşağı Kaleköy) consists of a hydroelectric unit of 510 MW and an 80 MW photovoltaic plant.

Cengiz Enerji, the holding’s subsidiary, is now testing wind in the area with the ambition to build and connect a wind power plant with Lower Kaleköy, located in the country’s east. Board member Ahmet Cengiz says it would be the first hybrid power plant in the world with three electricity sources.

Ayen Ostim finished the expansion last month of its Çaypınar wind power plant of 24 MW in Balıkesir province with a 5 MW photovoltaic system. More and more projects for such facilities are lately being submitted to regulators.

Surge in hybrid projects in Turkey

Bak Enerji is preparing for a major investment. It intends to install a 71.4 MW solar power plant to complement its 92.8 MW Yahyalı wind farm in Kayseri. Also just in the past week, Elfa Elektrik said it would add a 10 MW photovoltaic unit to its Umurlar wind power plant of 36.4 MW in Balıkesir.

Boylam Energy, subsidiary of Borusan EnBW Enerji, said in October that it would build a 94 MW solar power plant as an auxiliary source for Saros wind farm in Çanakkale, which has a capacity of 143 MW.

Earlier, Pakmem Elektrik revealed a 70 MW solar power plant would be added to its Cerit wind power plant of 92.7 MW in Kahramanmaraş.

There are several other projects in Southeastern Europe, mostly smaller ones. StubllaEnergy plans to install a 170 MW power plant in Kosovo*, consisting of wind turbines with a capacity of 132 MW and photovoltaic panels of an overall 38 MW.

Slovenia’s Dravske elektrarne Maribor (DEM) started the construction of the first segment of its 30 MW photovoltaic system at its 136 MW Zlatoličje hydropower plant.

India began works one year ago on a 30 GW hybrid solar and wind system in Gujarat. China recently said it started the construction of a 100 GW wind and solar project in a desert and that it plans to expand it to 400 GW.