04 Nov 2021  by World Nuclear News
NuScale Power of the USA and Romanian national nuclear company Nuclearelectrica plan to construct a NuScale small modular reactor (SMR) plant in Romania by 2028. The announcement came during a meeting yesterday between US Special Presidential Envoy for Climate John Kerry and Romanian President Klaus Iohannis on the sidelines of the COP26 climate conference in Glasgow. 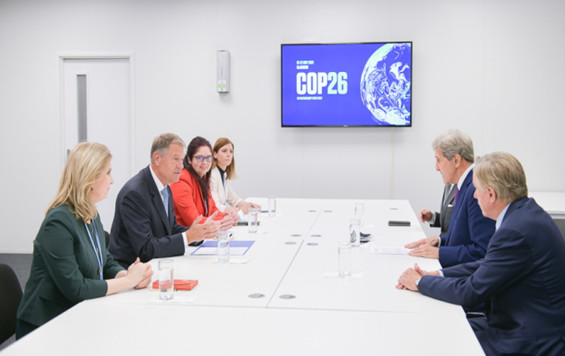 In a joint statement, NuScale and Nuclearelectrica said they will sign a teaming agreement to "advance clean nuclear technology in Romania. Following the partnership, Romania has the potential to accommodate the first deployment of SMRs in Europe."

In March 2019, NuScale and Nuclearelectrica signed a Memorandum of Understanding covering the exchange of business and technical information on NuScale's nuclear technology, with the goal of evaluating the development, licensing and construction of a NuScale SMR in Romania.

According to a White House statement yesterday, the commercial agreement between NuScale and Nuclearelectrica will include the construction of a six-module NuScale plant. This, it said, will initially create "over 3700 US and Romanian jobs, with the potential to create 30,000 US and Romanian jobs as the project grows."

"Romania will include small modular reactors in the national energy production system by 2028, which will strengthen the partnership with the USA in the civil nuclear field," a statement from the Romanian presidential office said. "Given the advantages generated by the value chains that will be created around this technology, Romania wants to participate in the advanced production of SMRs in the region, as well as in the preparation of human resources and support the operation of this new technology in other countries."

"This multi-billion-dollar effort showcases US ingenuity, creates thousands of jobs in both countries, strengthens European energy security, supports the highest standards for nuclear safety, security, and non-proliferation, and, importantly, addresses the climate crisis with clean power," the US Department of State said. "This pioneering initial step by Romania will build significant momentum for reducing emissions across Europe. With 30 coal power plants in the region, including seven in Romania, SMRs are ideally suited to replace this baseload power and employ many of the same workforce. We are excited about this partnership with Romania in advancing emerging clean technologies."

This latest cooperation builds upon a draft intergovernmental agreement on cooperation to expand and modernise Romania's nuclear power programme signed in October 2020 by the US Department of Energy and the Romanian Ministry of Energy. Areas for cooperation included the possible completion of units 3 and 4 at the Cernavoda nuclear power plant and the refurbishment of unit 1 at the plant.

Cernavoda is the only nuclear power plant in Romania and consists of two 650 MWe pressurised heavy water reactors. Unit 1 went into commercial operation in 1996 and unit 2 in 2007. Nuclearelectrica plans to extend the operating life of unit 1 to 60 years. Most of the work on units 3 and 4 - like units 1 and 2, Candu-6 reactors - was done in the 1980s prior to the fall of the government of Nicolae Ceausescu in 1989. In July 2020, Romania launched a tender for a new feasibility study to complete units 3 and 4.

In January this year, Nuclearelectrica was awarded a non-refundable grant of USD1.28 million by the US Trade and Development Agency for use in the identification of potential sites in Romania to host SMRs. Nuclearelectrica said the grant would be used to fund the cost of services required in connection with the delivery of technical assistance for a preliminary assessment of new potential SMR-compatible nuclear sites in Romania, excluding the existing Cernavoda site. The funds, it said, would also be used in the development of a licensing roadmap for SMRs.