Canada's Bruce Power has received approval from the Canadian Nuclear Safety Commission for the commercial production of the medical radioisotope lutetium-177 (Lu-177) in its nuclear power plants. The project to produce the innovative therapeutic isotope, which is used in the treatment of prostate cancer and neuroendocrine tumours, is a partnership between Bruce Power, IsoGen, Saugeen Ojibway Nation (SON) and ITM. 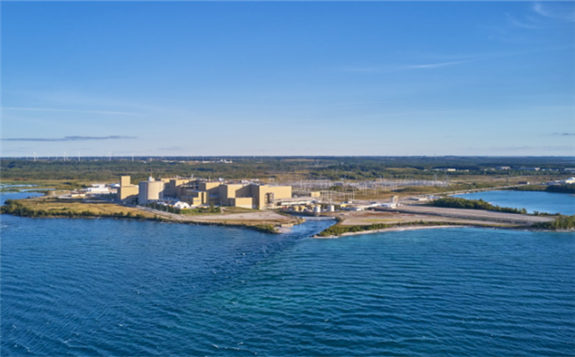 IsoGen, a joint venture of Framatome and Kinectrics, designed and manufactured the Isotope Production System (IPS) that will be used to produce Lu-177 by irradiating ytterbium targets inside Candu reactors at Bruce. The IPS is being installed as part of the ongoing Life-Extension Program, which began in 2016 and aims to add about 30 to 35 years of operational life to each reactor at the Bruce site in Ontario.

As the commissioning process continues there will be additional regulatory hold points to allow CNSC staff to confirm operational readiness of the IPS prior to the start of Lu-177 production, Bruce Power said. The company will finalise documentation and CNSC staff will review commissioning test results to verify the IPS meets its design and safety analyses requirements.

Irradiated targets will then be processed by Germany-based ITM to produce pharmaceutical quality no-carrier-added Lu-177, which will be marketed under the name Endolucin Beta.

Bruce Power is one of the world's largest producers of cobalt-60 - used for the sterilisation of single-use medical equipment as well as in cancer treatments - through its partnership with Nordion. The company said the approved Lu-177 project will expand its established isotope production and "solidify" it as an integral producer of critical medical isotopes. Chief Development Officer James Scongack said the Lu-177 project is a "game-changer" for the supply of medical isotopes and the global medical community.

Chief Lester Anoquot, Chippewas of Saugeen First Nation, said: "It's very exciting times for SON as we move forward to the next phase of the Isotope project with Bruce Power … We are proud to play a leadership role in the global fight against cancer, while building economic opportunities in our community."

The partnership, which includes an equity stake and revenue-sharing model for SON, is named Gamzook'aamin aakoziwin, which means 'We are Teaming up on the Sickness' in the traditional Anishinaabe language.