The Dutch government through the Netherlands Enterprise Agency (RVO) has provided funding for the implementation of what is claimed to be the world’s first offshore green hydrogen production plant. 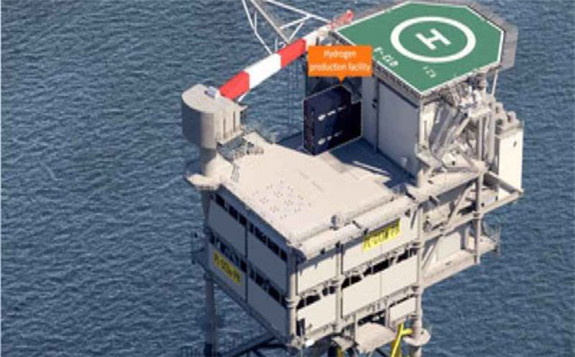 RVO has awarded €3.6 million ($4.2 million) to a consortium of energy and technology companies that are implementing the PosHYdon project. The funding will enable the consortium to kickstart the project and leverage its own budget to complete the installation.

The pilot project will include the integration of three energy systems – offshore wind, offshore gas and offshore hydrogen, at a facility operated by Neptune Energy approximately 13km off the coast of Scheveningen, in the Dutch North Sea.

The green hydrogen production plant to be installed at the Q13a-A site will be powered by electricity generated by onsite-offshore wind turbines. Seawater will be converted into demineralised water and then into green hydrogen via the electrolysis process, blended with gas, and then transported via an existing gas pipeline.

The 1MW electrolyser will produce a maximum of 400 kilograms of green hydrogen per day.

The aim of the pilot is to gain experience in integrating working energy systems at sea and the production of hydrogen in an offshore environment, the efficiency of electrolysers powered with variable offshore wind, and the costs associated with offshore green hydrogen installation and maintenance.

Jacqueline Vaessen, Managing Director of Nexstep, said: “Together with a number of operators and TNO, this idea arose about two years ago from a brainstorming session of the ‘Re-purpose’ working group within Nexstep. We looked at what the best location would be to host this pilot and then arrived at Neptune Energy’s Q13a-A, since that platform is already fully electrified using green electricity. Then the pioneering and search for suitable consortium partners began.”

René Peters, Business Director Gas Technologies TNO and initiator of the North Sea Energy Program, said: “In many studies, hydrogen is considered the missing link in the energy transition, with many talking about all the opportunities.