06 Jul 2021  by World Nuclear News
Rosenergoatom, the nuclear power plant operator subsidiary of Russia's Rosatom, has announced the successful completion of its annual emergency preparedness exercise. Separately, it has announced that Russia produced 7% more electricity from nuclear power in the first-half of this year than in the same period of 2020. 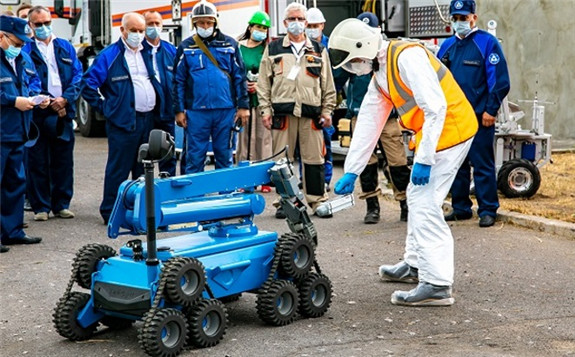 This year's exercise was conducted on 30 June-1 July at the Novovoronezh nuclear power plant, which was last used for such an exercise in 2011. More than 600 people from 20 organisations took part and included Rosenergoatom's Crisis Centre in Moscow.

The operator staff at the plant used full-scale simulators that can test their responses to all types of emergency situations. On this occasion, the scenario was "a strong earthquake in the central strip of Russia", whereupon all power units were stopped and the power supply of the Novovoronezh nuclear power plant was lost, disruption occurred to an industrial site, and some of the critical equipment of the nuclear power plant was damaged.

On the first day of the exercise, the plant personnel deployed mobile emergency equipment, including mobile diesel generators and pumping units, conducted radiation "reconnaissance" and organised the evacuation of staff. An injured worker was "given first aid and taken to hospital". On the second day, the fire and rescue unit of the Novovoronezh plant, practised the skills required to extinguish different types of fire as part of the training scenario. Specialists at the Novovoronezh branch of the Rosatom Emergency Technical Centre demonstrated the capabilities of modern technology, including robotic equipment, to eliminate the consequences of man-made accidents.

"Rosenergoatom is fully responsible for ensuring the safety of [Russia's] nuclear power plants at all stages, from their design to their decommissioning," Andrei Petrov, Rosenergoatom general director, said. "Therefore, it is extremely important to ensure the safety of facilities when they deviate from normal operation. To do this, we conduct complex emergency preparedness exercises every year at one of the nuclear power plants, where we check the level of cooperation in terms of preparedness to manage accidents in difficult situations," he added.

"As part of the exercise, we assessed our own preparedness for complex situations, such as multiple failures on several types of units. All matters of interaction have been worked out, which indicates a high level of emergency planning and preparation to resolve any crisis situation."

The Novovoronezh nuclear power plant, which provides 90% of the electricity and heat consumed by the Voronezh Region, was operating as normal throughout the exercise.

Rosenergoatom also announced that electricity generation at Russian nuclear power plants for the first-half of 2021 totalled 110.4 terawatt hours, an almost 7% increase up from the 103.2 TWh produced in the same period of last year. The "utilisation rate" by the end of the period was 83.23%.