21 Aug 2019  by Zachary Shahan
Those of us who have followed the electric vehicle market for several years (or, for some of you, decades) can easily get complacent about where the EV revolution is and where it’s headed. We can be lulled into a semi-sleeping state by monthly sales reports, by routinely seeing EV market share of 1–2% in some markets, 5–10% in others, and 50% in Norway. We can be blown away by the Tesla Model 3’s success, while at the same time underestimating what it means.

As Tesla CEO Elon Musk recently mused, it’s super hard for humans to comprehend exponential growth. Indeed, we are not good at thinking in exponential rather than linear ways. It’s one reason why there are popular riddles or tricks related to exponential growth. I’d argue that, in general, we are not good at forecasting, at processing changes that take more than a day to occur. Just think about some major changes in your life that you knew were coming — your brain probably couldn’t digest them, could absorb them until the changes occurred, and even then you might have needed a while to mentally adjust.

Getting practical for a minute, much has changed in the electric vehicle industry — beyond Tesla — that has gone under-noticed for various reasons. A new Nissan LEAF today is not much different in price from a new Nissan LEAF 7 years ago, in 2012. The big difference, the big evidence of change, is that the car now has much more range, more than double the range of a 2012 LEAF. The battery inside the Nissan LEAF is much better and holds considerably more energy despite coming at essentially the same price. The same thing has happened for other models or types of vehicles.

The thing that I think we get complacent about is that we inherently assume the battery technology is now settled and static. Of course, if we think about it, we know that’s not true, but we don’t think about it much. Our brains just accept today as reality. Just as the 73 mile LEAF of 2011 wouldn’t last long and range would more than double in 7 years, EV technology of today won’t last long. In 7 years, a LEAF could have much more range or be much cheaper.

While the LEAF has gotten much better in the past 7 years, Tesla has developed and rolled out the Model 3, a car that is much better than a 2012 Model S in many regards while also being significantly cheaper. In another 7 years, imagine what continued battery improvement will do for Tesla. 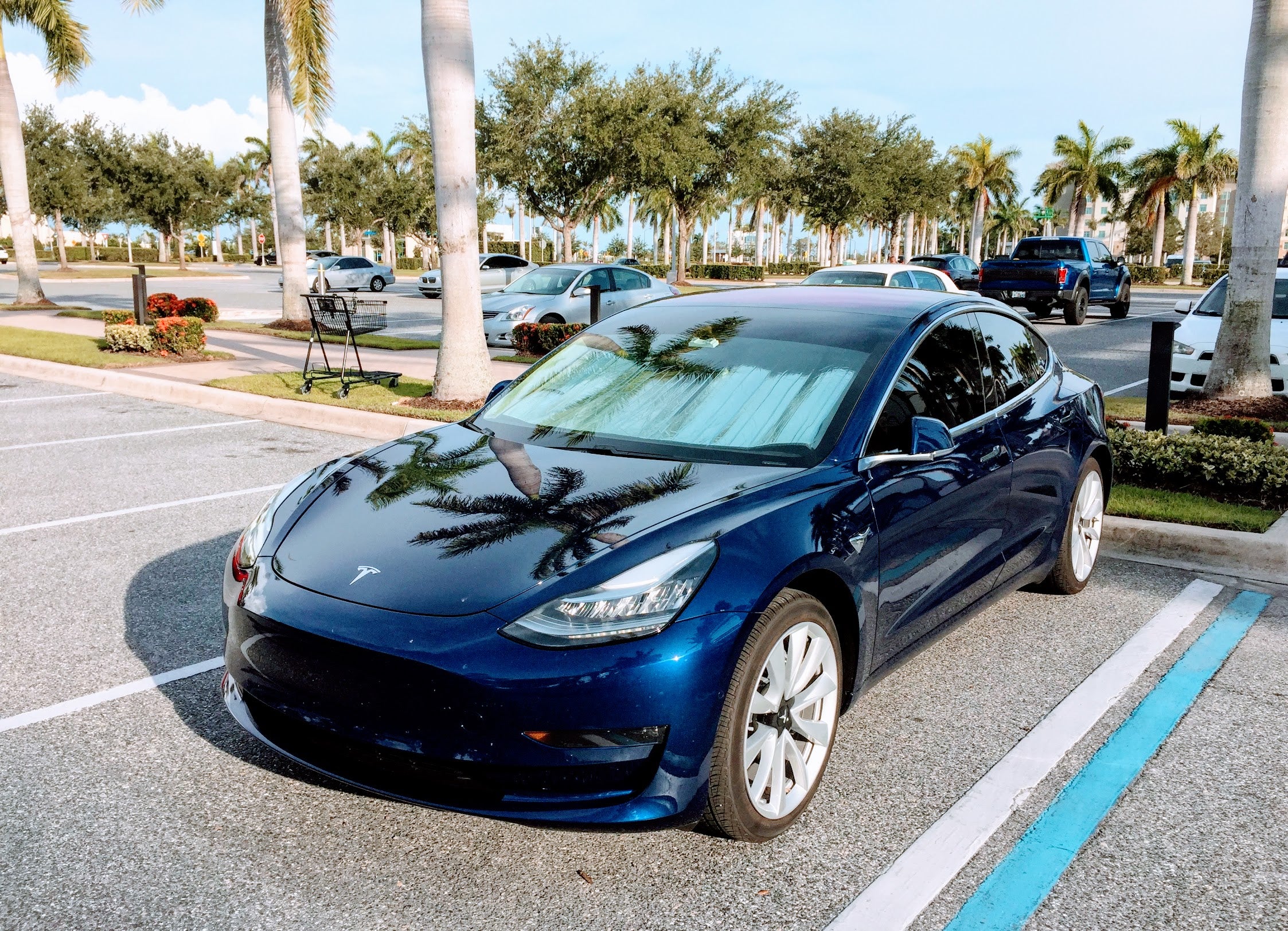 In 3–7 years, the Model 3 won’t be the only EV in its class that crushes any gasoline competitor. Nissan should have a model that does so, Volkswagen certainly will, Ford should, GM should, everyone should. If the don’t, they will struggle to stay in business.

Tesla’s vehicles will keep improving and Tesla will make more money on them as underlying prices come down. Elon has said they don’t plan to bring the Model 3 any lower than $35,000. That means reduced costs will put more money into Tesla’s piggy bank for additional investments/projects. Additionally, Tesla could end up rolling out a “Model 2” for $25,000–30,000. If the Model 3 looks like a disruptive top seller, imagine the Model 2! Who could sell a gasoline car at that point?

In general, much more of the public will soon find out that you can’t buy a gas car in most classes that can hold a candle to its electric competitors, and automakers still trying to push gasmobiles onto consumers will get burnt. Tesla will still be setting the pace for the industry, but that won’t be nearly as necessary. Other automakers will have mass-market electric vehicles that regularly rank at or near the top of sales charts (like they do in Norway today), because automakers know the technology is ready and they know that if they don’t sell the cars, a competitor will, and they will die.

Of course, we can assume some automakers are still not prepared, some continue to stick their heads in the sand, and they will be punished for it. Perhaps some of them will get bailed out by their respective governments. Others won’t.

Gasoline/diesel cars that come off lease or hit the used car market will struggle, since consumers won’t want to adopt cars that are costly to fuel, polluting, and expensive to maintain. Automakers that try to hold onto the gas/diesel era will file for bankruptcy or beg for government support. Tesla will continue seeing word-of-mouth sales light its future, while other electric vehicles will offer traditional options to go electric without compromise or worry.

And then there’s autonomy. 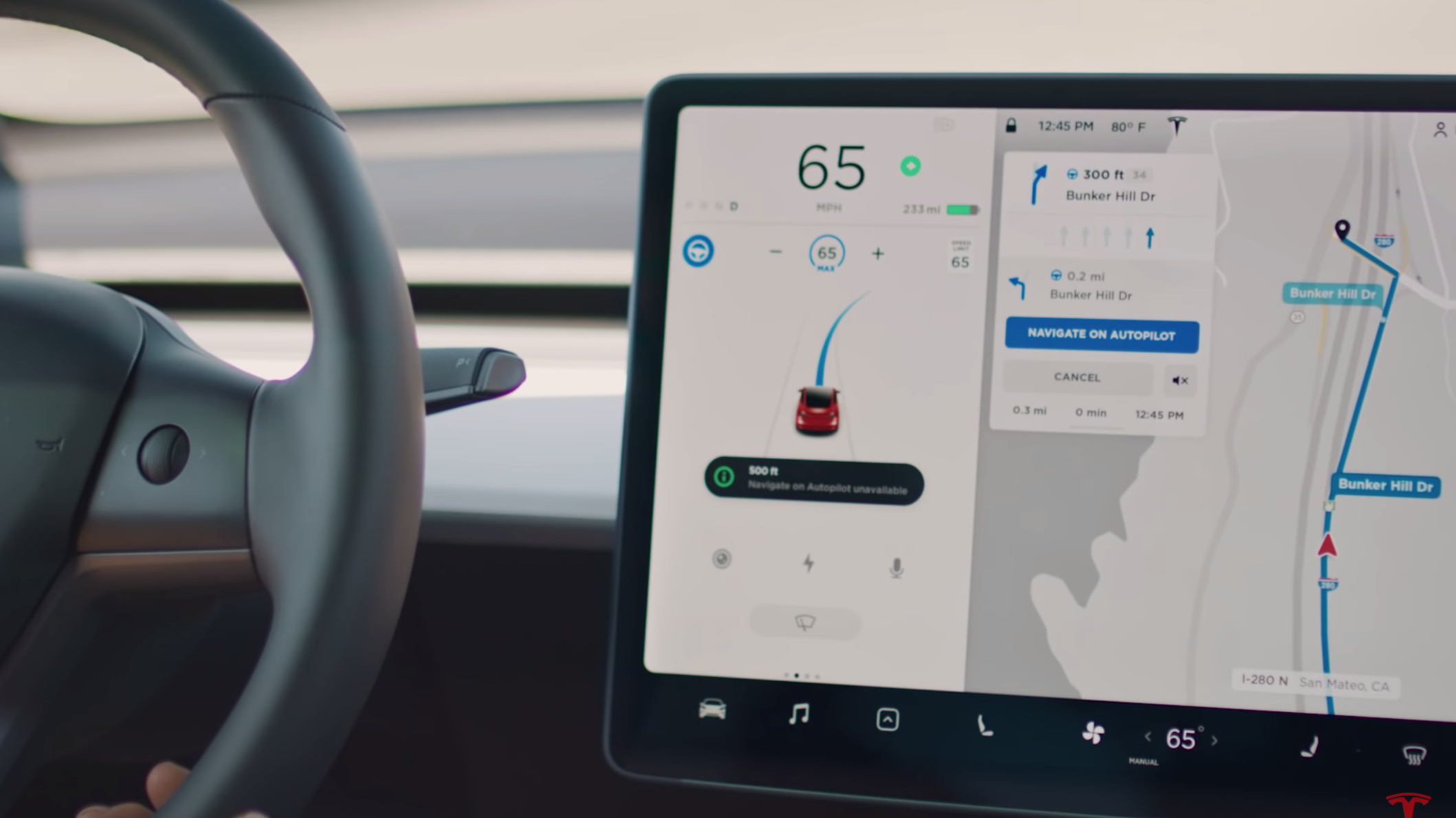 We see growing EV sales right now, and dropping gasmobile sales in some countries and globally, but what we don’t appreciate is that multipliers come into effect as the market changes. All of a sudden, an engine factory closes, an EV factory opens, a company folds, EV leaders gobble much more of the pie. As these things occur, more people find out about the revolution, and the revolution grows. As people’s preferred brands enter crisis mode, they look for new brands, and many find Tesla. Others catch word of VW’s hot new ID lineup, or Nissan’s electric crossover and sedan, or the new & improved Jaguar I-PACE. Of course, the automakers that evolve fast and intelligently will have a lot of opportunity to grow their market share.

The change is not just coming — it’s underway. The battery evolution that brought us the Model 3, a Nissan LEAF with 2–3 times more range than a 2011 LEAF, the Hyundai Kona EV, and the coming VW ID.3 will not stop. Batteries will keep evolving. We’ve already entered the crossover point where an EV beats its competitors in about 10 ways and doesn’t lose in any significant ways. We’ve already entered the vortex. As word of mouth blows around and awareness rises, the forces pushing us from 1% to 2% EV market share will become much more powerful and demand will start to skyrocket. At that point, things get messy. 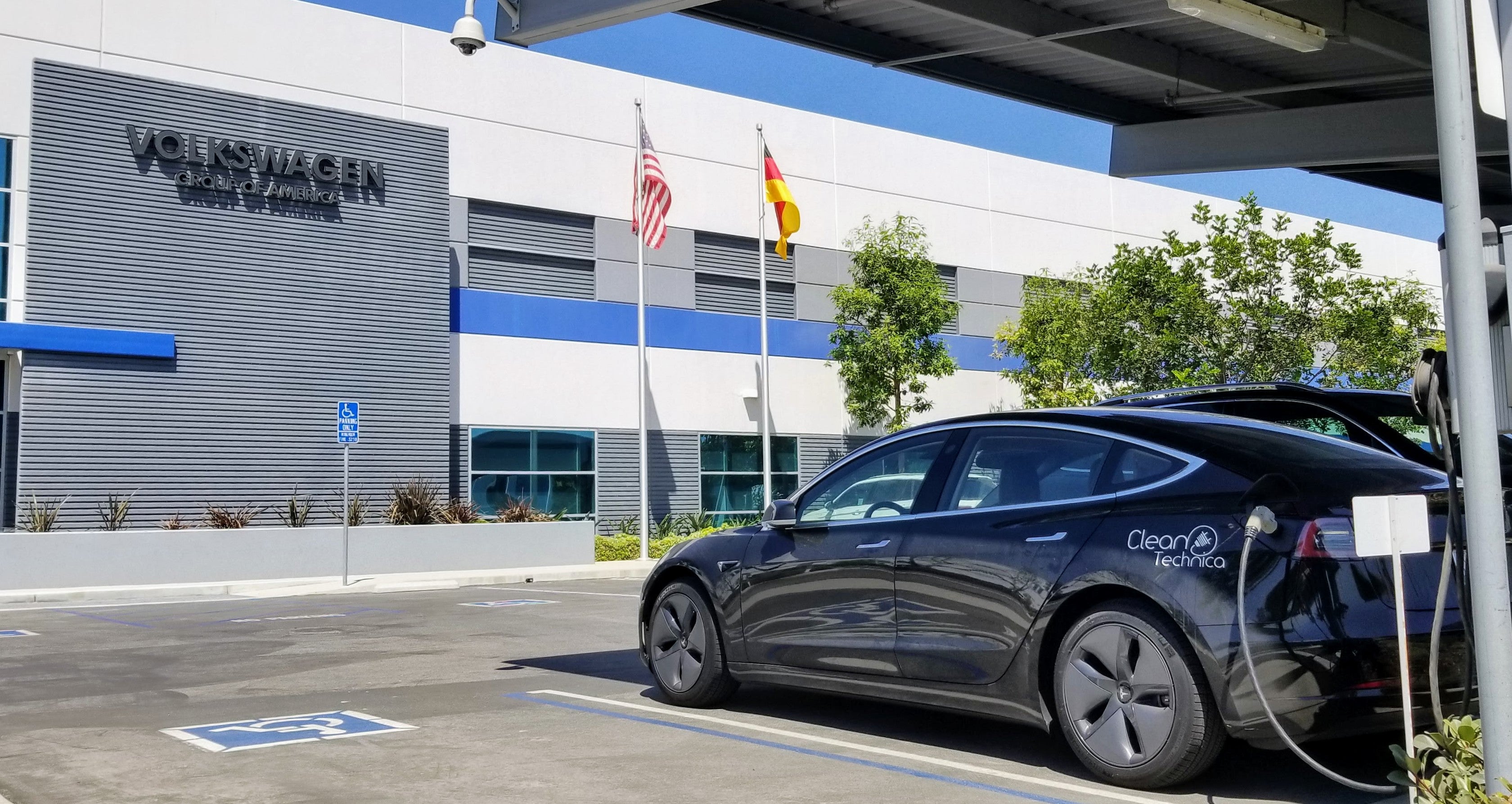 A CleanTechnica Tesla Model 3 at Volkswagen HQ in California.

I wrote last night about Volkswagen’s opportunity to actually gain market share from the EV revolution. I knew it would be a controversial, divisive article, and it was. But there’s an underlying point, which is indeed still a question. Well, let me present it as a series of questions and answers:

Is it clear electric vehicles are the future? Yes. Does Volkswagen Group agree with that? Yes, I think it does.

Is it clear that it’s a big financial challenge for traditional automakers to switch to EVs? Yes.

Is it clear that battery supplies are critical to competing in the electric revolution, if that is indeed what it is? Yes. Is Volkswagen Group working to address that problem? It seems like it, but that’s not entirely clear.

Does Volkswagen Group realize that being able to thread these needles carefully and ramp up EV production quicker than the competition (other traditional automakers) gives it the best chance of survival and financial success? I think so, and I think that’s exactly what it’s aiming to do.

What other automakers think that they need to try to aggressively thread this needle? Which automakers think there’s a bigger threat to slow-walking the EV transition than there is to accelerating into it? That’s the big fundamental question. Some are convinced Renault is intent on being a leader (or remaining a leader). I hope so, but I’d like to see a bit more evidence of that. Some are convinced Hyundai–Kia is intent on being a leader. I know they have done a great job building competitive EVs, but I haven’t seen strong evidence they are working hard to secure the battery supplies needed (in fact, they have been really bad at this so far) or that they have a solid EV platform for quickly rolling out EVs of various classes in a financially efficient manner. PSA Group, GM, and Ford all have their supporters, but solid evidence that they are focused more on ramping up than PR is limited and scattered. There was some hope Nissan would be intent on retaining its hold on the “top selling EV in history” title, and adding some other titles to that one, but then it apparently committed corporate self-sabotage and seems to have abetted the illogical jailing of its #1 spokesperson and one-time corporate savior. It’s hard to have much hope for Nissan these days.

Looking at that long paragraph in total, who’s likely to jump into the messy transition most enthusiastically and come out on top? Who is looking at the pace of technological change and calculating that EVs will soon be so much more competitive than gasmobiles that the early majority will be driving millions of them home from European and US dealers year after year? Feel free to place your bets, and be sure to watch closely. I’ve got my own hunch, but I’m not yet placing any bets (beyond my bet on Tesla/TSLA). 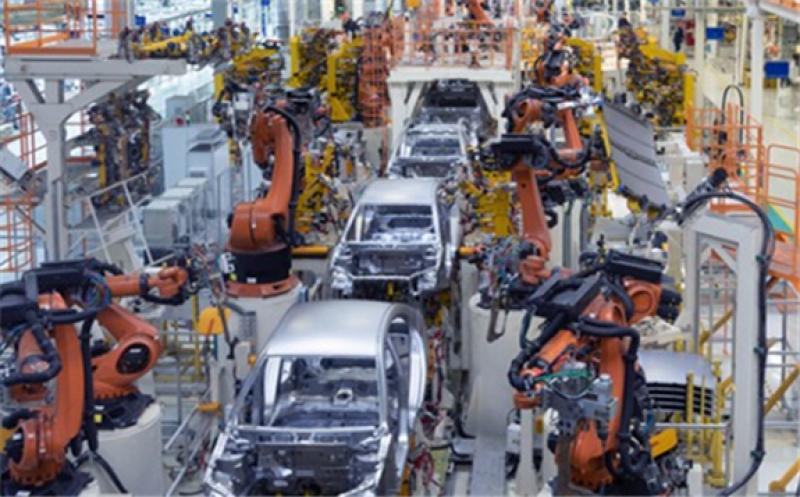 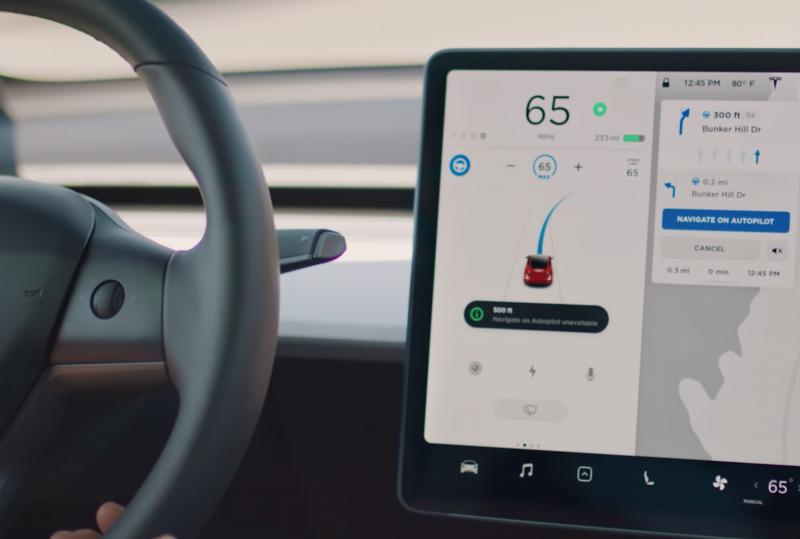 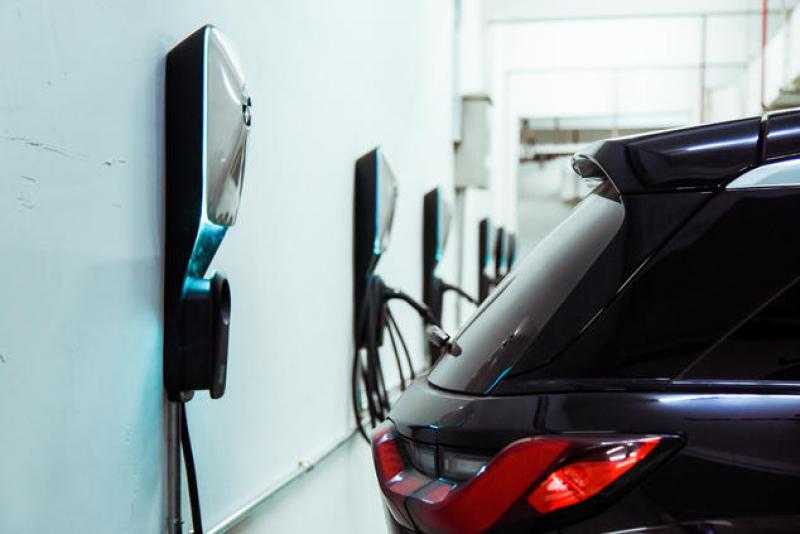