Phase 2 of a 320 megawatt floating solar project in China’s Zhejiang province has been completed. The 120 megawatts of new capacity complements the 200 megawatt (MW) portion of the installation that was completed in 2017. The panels float on the surface of the Changhe and Zhouxiang reservoirs in Cixi. The developer of the project is Hangzhou Fengling Electricity Science Technology. 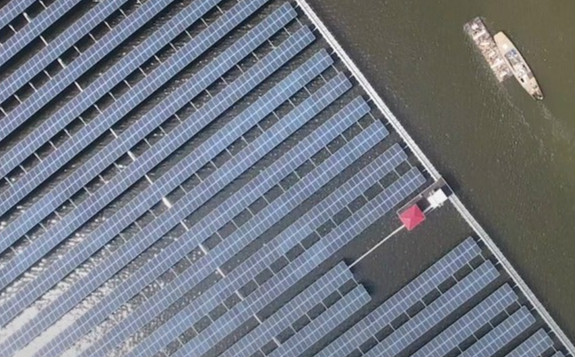 Tammy Tang, Kstar marketing manager, said, “The 320 MW plant has now an expected annual generation of 352 million KWH. The annual revenue from the generated electricity for the owner of the plant is about $45 million, while the annual fishery income can reach nearly $5 million.” Phase 2 cost a total of $1o0 million.

She added that the inverters supplied are designed specifically to withstand a wet environment with particular attention paid go sealing out moisture and dust. Electricity from the second phase will sell for 12 cents per kilowatt-hour.

Here’s 200MW solar-water power plant,the first phase of a 320 MW project. The PV central inverters were all provided by KSTAR in Jan,2017. The annual electricity generation is expected to be 220 million KWH.

The panels help reduce water surface evaporation and save water resources while creating a better hatching environment for fish, which helps to increase aquatic production. “The PV power plant has a high power generation efficiency and low operations and maintenance costs, as well as a minimal impact on the maritime life,” Tang said.

As CleanTechnica’s Michael Barnard told us in December, solar panels that float on water are more efficient because the water underneath them helps to keep them cool. They also help reduce evaporation, which preserves supplies of fresh water. All in all, floating solar is a brilliant idea whose time has come.