A matter of weeks. That’s all it took for the coronavirus pandemic to change the face of the world and wreak havoc at an unprecedented scale on all aspects of human life. The economic fallout of this health emergency has proved particularly quick and devastating on the transport sector, as entire continents try to slow the spread by adopting strict lockdowns. It won’t come as a surprise, then, to see the car industry’s March sales numbers already showing the effect of this crisis.

In this worldwide debacle, Italy is no exception. In fact, this was the first country in the West to adopt a very strict nationwide lockdown — as early as March 9. Sales for this month have since been widely expected to end abysmally — however, perhaps not as badly as the official figures have come to show. Unrae data offer a bloodbath scenario, with total car sales down 85.4% in the country compared to the same month last year. Fewer than 29,000 cars were sold this March compared to over 195,000 in March 2019.

All is not equal, however, when sales figures are reviewed by powertrain. Full electric cars saw record sales in the first two months of the year, with January totaling just short of 2,000 units and February compounding the trend with a new all-time monthly record of over 2,500 sales. While we obviously couldn’t hope for similar growth figures following the introduction of the lockdown, the EV segment seems to have coped pretty well against the broader downward trend of internal combustion engine (ICE) cars: 926 BEVs were sold this month, up almost 50% from the same period last year, when 622 all-electric cars were sold ahead of the introduction of EV incentives. Plug-in hybrids saw a different outcome, with sales down more than 15% YoY (388 units versus 488 twelve months ago), still a positive result compared to the rest of the market.

BEV sales numbers, albeit greatly below the 2,000+ units that could have been expected under normal circumstances, are nonetheless quite stunning, and only in part can the year-over-year increase be explained by the naturally lower performance of 2019, when March was heavily influenced by the wait for subsidies and for new EV models. The 3.2% share of BEVs in the market this month — an all-time high made possible by the apocalyptic collapse of ICE car sales — puts electric cars in the spotlight and gives way to questions as to the consequences the current crisis will have on the pace of adoption of electric cars globally. But let’s see what this month’s top 10 shows us. 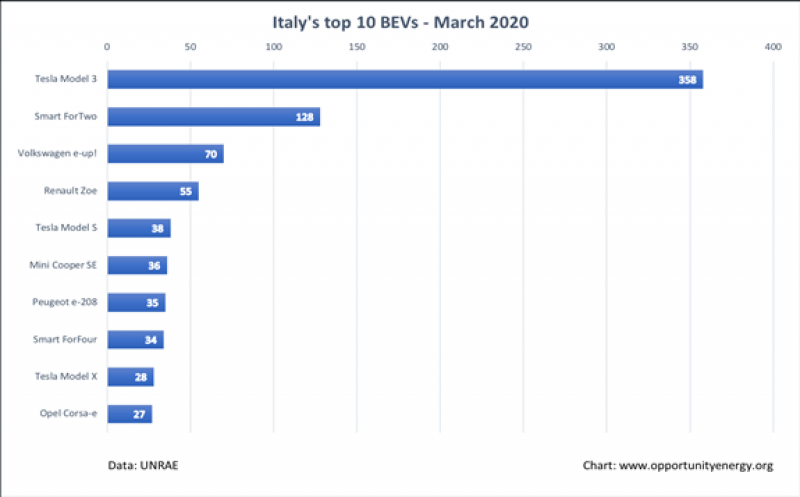 In a chart featuring predictably subdued sales numbers, Tesla Model 3 takes the top spot and stands out for its outsized share of the BEV market, with 358 units, or about 39% of the segment. Taking the lead in the last month of a quarter is not unusual for Tesla, which typically delivers its cars in large batches towards the end of each three-month period. However, it’s the seemingly unaffected level of sales for the American best-seller that catches the eye. While not an all-time record — June 2019 saw Model 3 reaching 372 sales in Italy — Tesla seems not to suffer from the newly imposed lockdown, at least for now. The purchase and delivery process typical of Tesla orders might be the most obvious reason for such outstanding performance in the face of the current crisis.

Way below the Model 3’s lead, the Smart ForTwo (with 128 units) and VW e-up! (70) follow in second and third position, respectively, while the market-leading Renault Zoe falls down to fourth place, with 55 units sold compared to 387 just a month ago and 411 in January. More of the popular, new compact EV models populate the rest of the top 10 — Mini, e-208, ForFour, Corsa-e — and it’s noteworthy to see both the much more expensive Tesla Model S and X showing up in the chart, thus reinforcing the argument for a more resilient sale and delivery process by the Californian automaker. In a country dominated by sales of affordable city cars such as Italy, even the underwhelming March figures of compact e-cars are however sufficiently high to buck the trend of a market that has all but ground to a halt. A perfect example is the e-up!, which now makes up almost a third of the monthly VW up! total sales. The e-208 also now represents 10% of Peugeot 208 model. Are consumer preferences consolidating Europe’s EV push?

As the coronavirus crisis unfolds, Tesla’s disruptive business model may be setting yet another example for legacy brands to follow. And while we are still at the initial stages of a much wider global economic slowdown, the overall performance of the EV market relative to ICE incumbents gives an early indication that — at a time of great uncertainty over the future — electric cars are here to stay, and most likely, lead the way.