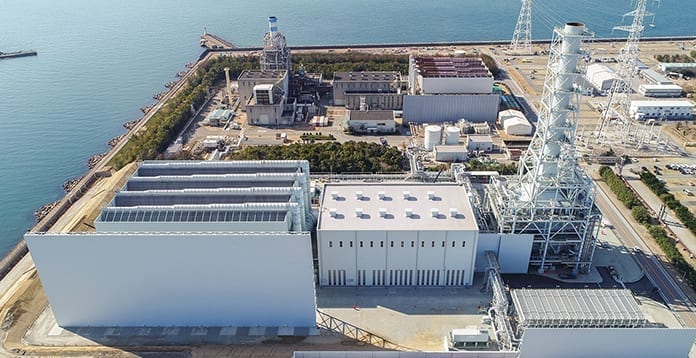 The 566-MW facility at Takasago Works in Hyogo Prefecture, Japan, will replace the iconic T-Point facility, which MHPS’s parent company Mitsubishi Heavy Industries (MHI) completed in 1997 as a 60-Hz followup to the 1992-built 50-Hz K-Point validation plant in Kanazawa. Like its predecessors, T-Point 2 has been designed as an ultramodern power plant—which will actively supply power to the regional grid—and a demonstrator that will enable engineers to push the realms of gas turbine technology.

Construction of T-Point 2 began in late 2017 following years of engineering efforts, and MHPS announced on April 2 it has now been synced to the grid and is currently operating at full load—ahead of schedule. Commercial operations at T-Point 2 are now expected to begin in July 2020. When completed, the facility will achieve a power output of more than 566 MW (60 Hz), with “nearly 64% efficiency, 99.5% reliability, and a world-first turbine inlet temperature of 1650C—raising industry standards for gas turbine combined cycle performance globally,” it said.

Mitsubishi Hitachi Power Systems, Ltd. (MHPS) in April 2020 said it planned to begin commercial operations at T-Point 2, its new combined cycle power plant validation facility at Takasago Works in Hyogo Prefecture, Japan, in July 2020. The facility will replace the company’s iconic T-Point plant, which was built in 1997. T-Point 2 is shown here in the foreground, and T-Point is in the background. Courtesy: MHPS

MHPS plans to use the facility to validate its growing line of advanced gas turbine models. It will serve as a crucial testing ground to improve the 1,650C–class JAC (air-cooled J-series) model, as well as other turbine models that fit the 1,700C “ultrahigh temperature” range. MHPS will also use the facility to validate steam turbine upgrades, air-cooled condenser technology, generators, and static frequency converters.

The first gas turbine MHPS plans to validate at T-Point 2 is an “upgraded” JAC model. The company’s latest JAC model is its M501JAC. Building on MHPS’s 2011-introduced J-series—which applied steam cooling to the combustor and raised its turbine inlet temperature (TIT) to 1,600C (and efficiency to about 62%)—the JAC series adopts an air-cooled technology first applied to the G-series’ GAC line, which has a TIT of 1,500C. The JAC model essentially has the same compressor flow path and turbine shape as the J-series, but it features an optimized cooling structure for the blades and vanes and a “64% combined cycle efficiency,” as MHPS Americas President and CEO Paul Browning told POWER in March. MHPS has bagged lucrative orders for the turbine model, including for two M501JAC power trains that will eventually be converted to combust 100% renewable hydrogen.

According to MHPS, T-Point 2 is “the only plant of its type in the world to function as both a technology demonstrator and an electric power producer and supplier.” Compared to T-Point, the T-Point 2 integrates a number of noteworthy technology gas turbine advancements designed to augment prototype validation. For one, it will feature a triple-casing steam turbine, which MHPS said will essentially serve to slash heat loss and boost “overall system efficiency through a multiplier effect with the JAC gas turbine.”

As significantly, it will also host what MHPS has called the world’s “first autonomous combined cycle power plant,” a project that will integrate MHPS’s proprietary TOMONI digital solutions in all its controls to allow it to further boost flexibility and performance, as well as optimize operations and maintenance.

The company on Thursday said work is continuing to install and train advanced artificial intelligence (AI) technology at T-Point 2. Eventually, it plans to run the facility through an 8,000-hour “durability demonstration period,” when it will train the AI applications. As designed, these apps will allow MHPS to “remotely monitor and manage total plant performance; remotely operate the plant in coordination with grid and fleet-wide energy management objectives; and utilize sensor and control system data to make smarter operation decisions in real time,” it said.

As MHPS executives told POWER last year, notable TOMONI components that will use or enable AI are smart sensors; an OSIsoft PI System data management platform; Microsoft Azure cloud computing; and AI-augmented advanced pattern recognition software to confirm normal operation or detect and report anomalies. T-Point 2 will also integrate AI-assisted maintenance and enable predictive maintenance strategies, as well as include machine learning, including from itself and other MHPS turbines.

If successful, the project could have remarkable implications: The value of automating operations and maintenance decision-making could help maximize the profitability of its growing installed gas turbine fleet, and give the models under development a crucial edge in a cutthroat market.