Details about how Haiyang is producing heat are unclear. Generally, in a nuclear cogeneration process, a coolant recovers the thermal energy released by fission in the reactor core. That energy is usually converted into electrical power through a turbine generator, but when heat is part of the final use, it can be used directly for district heating and cooling, process steam, desalination, hydrogen, or steel manufacturing. 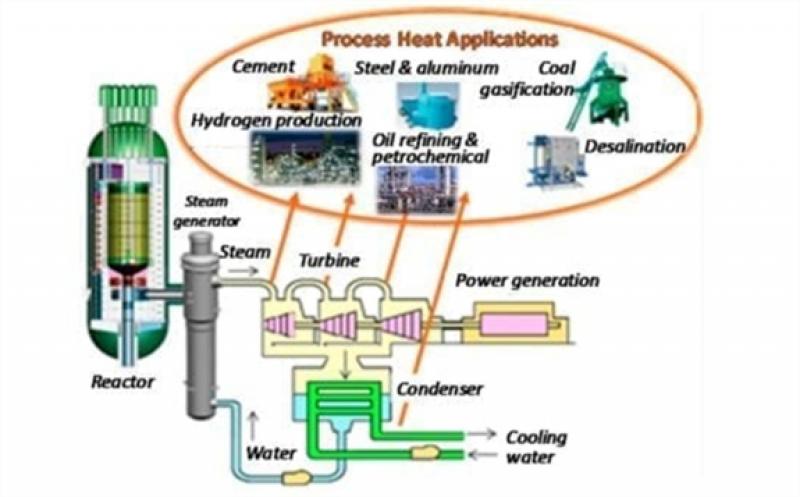 The International Atomic Energy Agency (IAEA), which published guidance on nuclear energy cogeneration this September, notes that combined heat and nuclear power is not new, though interest in it is growing. About 43 nuclear reactors around the world generate district heating, most which are in Eastern Europe and Russia; about 17, in Japan, Kazakhstan, and the U.S., desalinate water; and industrial non-electric applications have been achieved at seven reactors in Canada, Germany, India, and Switzerland.

In total, nuclear cogeneration projects around the world have to date accumulated nearly 750 operating years of experience—which compares to 17,000 reactor years of experience for civil nuclear power. Of reactors that today provide district heating, heat power output ranges 5 MWth to 240 MWth, the IAEA says. The total distributed heat power is around 5,000 MWth, according to the IAEA, which corresponds to an average energy withdrawal of less than 5%. “This means that, even if running in cogeneration mode, the primary output of the reactor is still electrical power,” it explained.

The Haiyang project is important for two reasons: It leverages energy from newly constructed third-generation reactors—some of the first AP1000s completed to date; and its success will serve as a blueprint for nuclear energy diversification and a “clean” heat expansion in China, which has 45.6 GW of installed nuclear capacity and has another 11 GW under construction.

As part of the first stage, the project is providing heat to the nuclear plant’s employee dormitory and some residential areas in Haiyang, a coastal city in Shandong province, eastern China, that has a population of about 658,000. No timeline is provided, but SDNPC says a later stage will involve modifications to Units 1 and 2 to expand the heating capacity to 30 million square meters.

SPIC, meanwhile, plans to build four more units at Haiyang, though these will feature a local standardization of the AP1000 design, known as the CAP1000. While Units 3 and 4 received construction approval in December 2015 and construction was slated to begin in 2017, no progress has been reported yet. Unit 1 of the Haiyang plant began operation in October 2018, with Unit 2 following in January, after delays due to equipment problems and the three-year moratorium following the Fukushima accident. Haiyang Units 1 and 2 are currently maintaining “safe and stable operation,” SDNPC said, adding that it expects the annual power generation from the plant in 2019 will reach 20.6 TWh—enough to meet about a third of annual demand by Shandong province’s residential needs.