We need to understand carbon capture, storage and utilisation (CCUS) better. To do so, this article looks at 10 methods and estimates how much CO2 each will take out of the atmosphere by 2050, and the cost per tonne. In their list the authors, Ella Adlen and Cameron Hepburn at the University of Oxford, cover the industrial (e.g. CO2-EOR, synfuels) to the biological (e.g. forestry, soil carbon sequestration). They say there are six that can be cost competitive and profitable soon, even now: CO2 chemicals, concrete building materials, CO2- EOR, forestry, soil carbon sequestration, biochar. Four are not (yet?!): CO2 fuels, microalgae, bioenergy with CCS (BECCS), enhanced weathering. It matters because the closer each is to becoming a profitable business the sooner it will happen. The authors point out their costs are likely to be overestimates: predicting technological breakthroughs over future decades is far from easy. But, in a similar vein, there are large uncertainties too over scalability, the permanence of the capture, and the cleanness of the future energy mix being used to power certain methods. These uncertainties need to be resolved fast as there will be no successful Transition without successful CCUS.

Can we turn CO2, the waste gas largely responsible for global warming, into a valuable feedstock? The question first emerged in the oil crisis of the 1970s, when alternatives to scarce oil were being sought.

The idea has resurfaced on the wave of circular economic thinking, triggered by climate concerns and with a view towards incentivising carbon capture. But opinions on CO2 utilisation veer between scepticism and enthusiasm.

New approaches are constantly arising. Claims of “CO2 avoided”, “CO2 removed” or “reduced CO2 emissions” are easily confusable, and corporations and governments are starting to invest in various candidate technologies without having the big picture to hand.

In a new Nature perspective, we set out to pin down what CO2 utilisation is, how it might relate to CO2 removals and emission reductions, and whether such technologies are profitable or scalable.

As a team, we represent economists, engineers, chemists, soil scientists and climate modellers – the whole spectrum of views on utilisation. Our study is the most comprehensive to date on the relative scale and costs of different ways to use CO2.

What is CO2 utilisation?

Conventionally, “CO2 utilisation” is an industrial process that makes an economically valuable product using CO2 at concentrations above atmospheric levels. CO2 is either transformed using chemical reactions into materials, chemicals and fuels, or it is used directly in processes such as enhanced oil recovery.

This definition has its historical reasons, but it is not the only kind of CO2 utilisation. For a long time, people have also been thinking about how to use natural carbon – carbon made by plants from atmospheric CO2 – as a feedstock to make valuable products. And CO2-using techniques, such as soil carbon sequestration, through their ability to enhance crop yields, can also make an economic product.

In our paper we look at 10 specific pathways of CO2 utilisation, best categorised by considerations of how easily the carbon flows around the Earth’s spheres and where it ends up, as shown in the figure below.

This shows “open” utilisation pathways (purple arrows) that store CO2 in leaky natural systems, such as forests, which can turn from sink to source very quickly. “Closed” pathways (red), such as building materials, offer near permanent storage of CO2. Finally “cycling” utilisation (yellow), such as CO2-based fuels, which moves carbon around over short timescales. 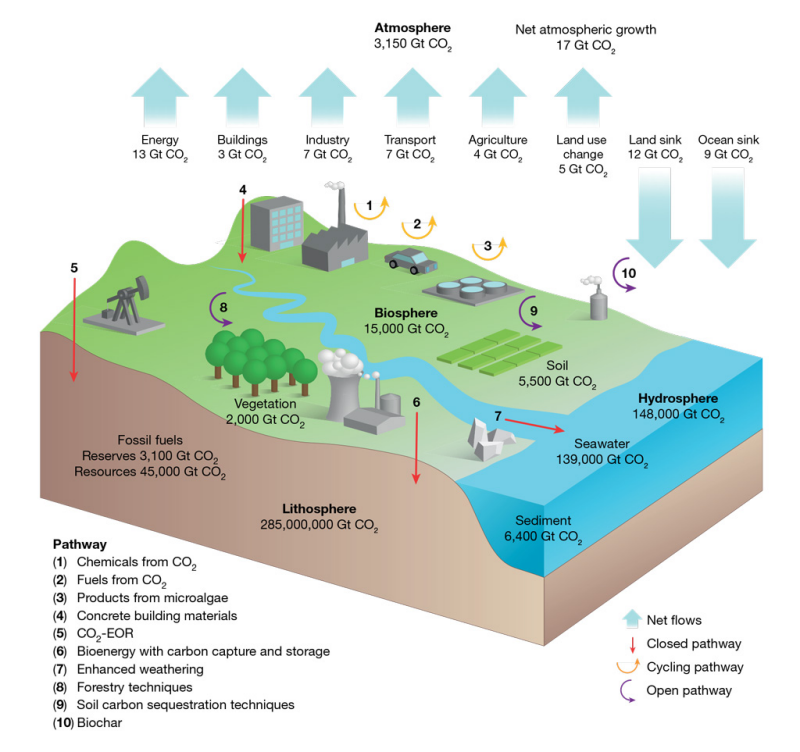 All ten CO2 utilisation pathways in our figure offer some kind of economic motivation, together with some degree of climate mitigation potential.

CO2 utilisation can help in two main ways: the removal and long-term storage of atmospheric CO2; and the reduction of CO2 emissions to the atmosphere. Potentially, using CO2 to make valuable products might also offset some of the costs of climate change mitigation.

Our estimates show that at the top end, over 10 billion tonnes of CO2 (GtCO2) a year could be utilised – compared to global emissions of 40GtCO2 – for less than $100 per tonne.

Most of that utilisation is associated with medium- or long- term storage in open and closed pathways. However, there are several problems and challenges to overcome before such large utilisation could be achieved.

Furthermore, even if CO2 utilisation were successful, that does not necessarily mean it would be beneficial for the climate. If done without due consideration, CO2 utilisation – in common with other approaches that remove and/or store CO2 – might not contribute to mitigation at all.

Because of these issues, whether the implementation of a CO2 utilisation technology will be climate-beneficial will depend on a host of factors. The most important of these are:

Energy source: CO2 utilisation technologies can be energy-intensive. This energy needs to be renewable: either directly from the sun, or via renewable technologies.

Broader decarbonisation context: Some of these technologies only make sense as mitigation strategies at certain points of the global decarbonisation process. For example, using enhanced oil recovery to sequester CO2 could be used in the short term before the energy and transport systems are decarbonised.

Scale: In order to make an appreciable difference to the global flows of CO2, pathways need to have the potential to scale quickly. The window for climate action is small and building an entirely new CO2 utilisation industry in the time needed is a non-trivial challenge.

Permanence: The most impactful technologies will be the ones that permanently remove atmospheric CO2 or permanently displace CO2 emissions.

The 10 pathways and their prospects…

The scale evaluations for 2050 come from a process of structured estimates, expert consultation and large scoping reviews. Our cost estimates are breakeven costs – meaning they take into account revenue – and are presented as the interquartile ranges from techno-economic studies collected from scoping reviews. This means that the costs are backward-looking and likely to underestimate the ability of the pathways to achieve economies of scale. Negative costs mean that the process is profitable under present day assumptions.

Reducing CO2 to its constituent components using catalysts and using chemical reactions to build products, such as methanol, urea (to use as fertiliser) or polymers (for use as durable products in buildings or cars), could utilise 0.3 to 0.6GtCO2 a year in 2050, at costs of between -$80 to $300 per tonne of CO2.

Combining hydrogen with CO2 to produce hydrocarbon fuels, including methanol, synfuels, and syngas could address a huge market – for example, across existing transport infrastructure – but the present-day costs are high. Together, CO2 fuels could utilise 1 to 4.2GtCO2 a year in 2050, but costs are up to $670 per tonne of CO2.

Using microalgae to fix CO2 at high efficiencies and then processing the biomass to make products, such as fuels and high-value chemicals, has been the focus of research efforts for many years. With complex production economics, costs are between $230 and $920 per tonne of CO2, and 2050 utilisation rates could be 0.2 to 0.9GtCO2 per year.

CO2 can be used to “cure” cement, or in the manufacture of aggregates. Doing so stores some CO2 for the long term and could displace emissions-intensive conventional cement. With accelerating global urbanisation, but a challenging regulatory environment, we estimate a utilisation and storage potential of 0.1 to 1.4GtCO2 in 2050, with present day costs of between -$30 and $70 per tonne of CO2.

Injecting CO2 into oil wells can increase the production of oil. Normally, operators maximise oil and CO2 recovered from the well, but, critically, it is possible to operate EOR so that more CO2 is injected and stored than is produced on consumption of the final oil product. We estimate that 0.1 to 1.8GtCO2 per year could be utilised and stored this way in 2050, at costs that are between -$60 and -$40 per tonne of CO2.

In bioenergy with carbon capture, the operator captures CO2 by growing trees, produces electricity through bioenergy and sequesters the resulting emissions. With a rough approximation of electricity revenues, we estimate utilisation costs of between $60 and $160 per tonne of CO2. Some 0.5 to 5GtCO2 per year could be utilised and stored this way in 2050. This is lower than some previously published estimates of BECCS and represents a level of deployment that is cognisant of other sustainability aims.

Crushing rocks, such as basalt, and spreading them on land can result in the accelerated formation of stable carbonate from atmospheric CO2. It is likely that doing this on agricultural lands will result in enhanced yields. However, the very early-stage nature of this pathway means that we have not made 2050 estimates for it.

Timber from both new and existing forests is an economically valuable product that could potentially store CO2 in buildings and, by doing so, displace cement use. We estimate that up to 1.5GtCO2 could be utilised in 2050 in this way, at costs of between -$40 and $10 per tonne CO2.

Land management techniques for soil carbon sequestration can not only store CO2 in the soil but also enhance agricultural yields. We estimate that the CO2 utilised in the form of that increased output might be as much as 0.9 to 1.9GtCO2 per year in 2050, at costs of -$90 to -$20 per tonne CO2.

Biochar is “pyrolysed” biomass: plant material that has been burnt at high temperatures under low oxygen levels. Biochar application to agricultural soils has the potential to increase crop yields by 10% – but it is very hard to make a consistent product or predict soil reactions. We estimate between 0.2 and 1GtCO2 could be utilised by biochar in 2050, at costs of around -$65 per tonne of CO2.

The summary figure below shows an estimate of how much CO2 could be used by each pathway (the width of each column) and the associated breakeven costs (height of the columns).

The low scenario (chart on the left) and the high one (right) reflect the range of outcomes depending on levels of investment, uptake and technological improvements by 2050. The shading refers to technological readiness, ranging from low or variable (pale shades) through to high (darker shades). The asterisks refer to the duration of CO2 storage ranging from days or months (single asterisk) through to centuries or more (triple asterisk). 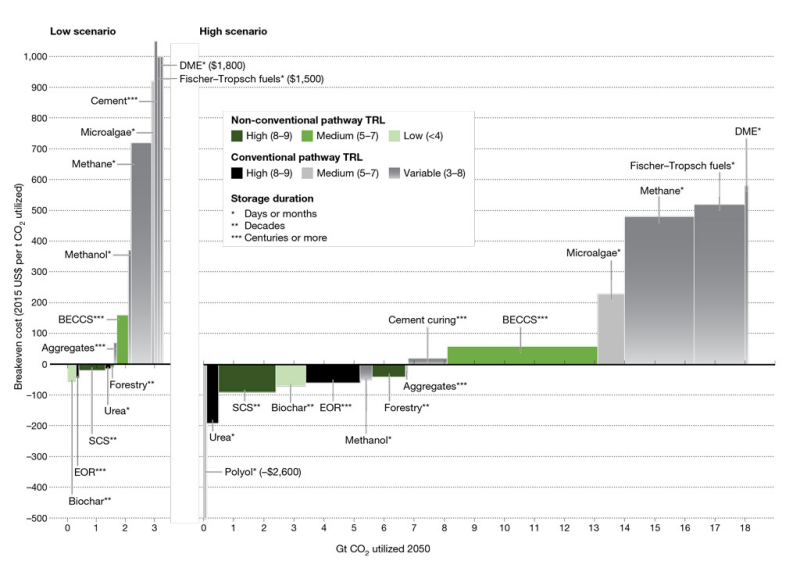 The figure above shows that CO2 utilisation could generate significant flows of CO2 in 2050 – and that some pathways can be expected to be profitable in their own right. We think this could be an opportunity to leverage those flows for the purpose of climate change mitigation.

However, the charts also emphasise the large uncertainty over the scale of that potential and the likely costs of tapping into it. In order for CO2 utilisation to be successfully deployed in the fight against climate change, these uncertainties must be resolved alongside potential – and non-trivial – challenges, of which energy intensity and the permanence of carbon storage are just two. 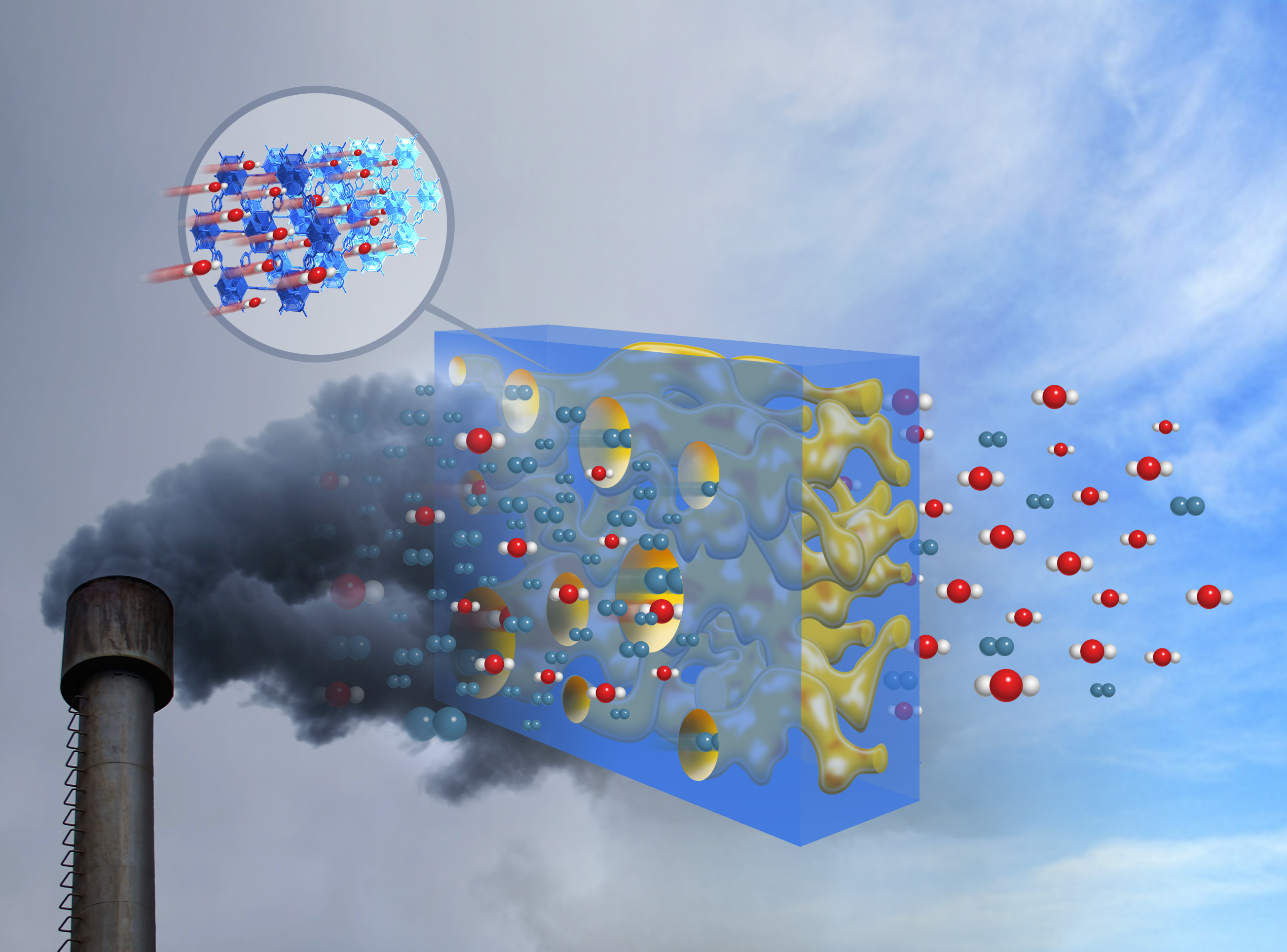 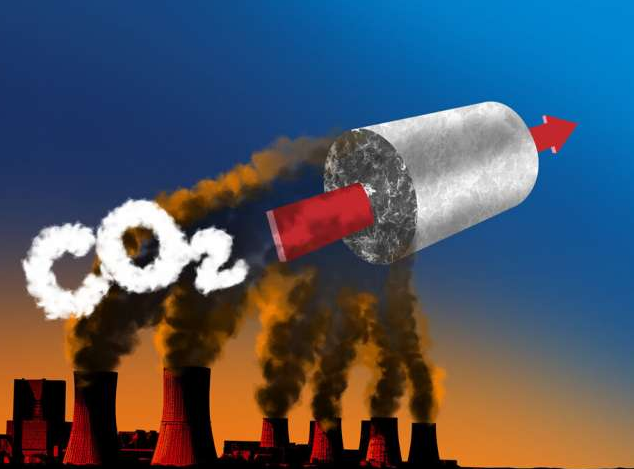 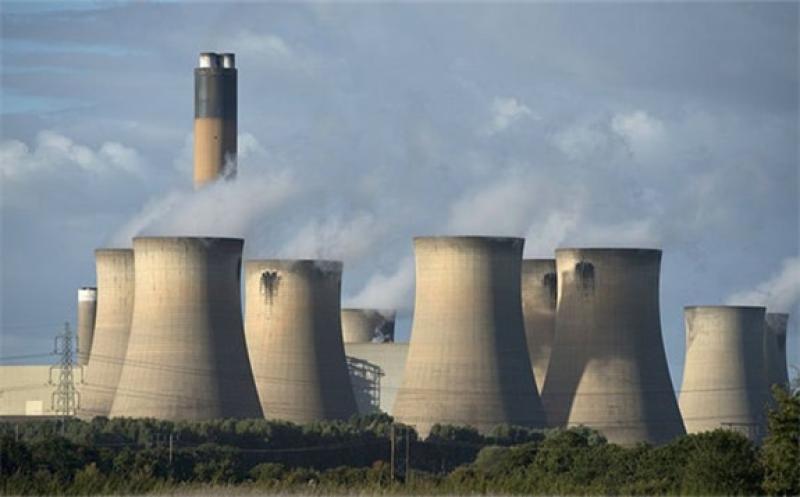