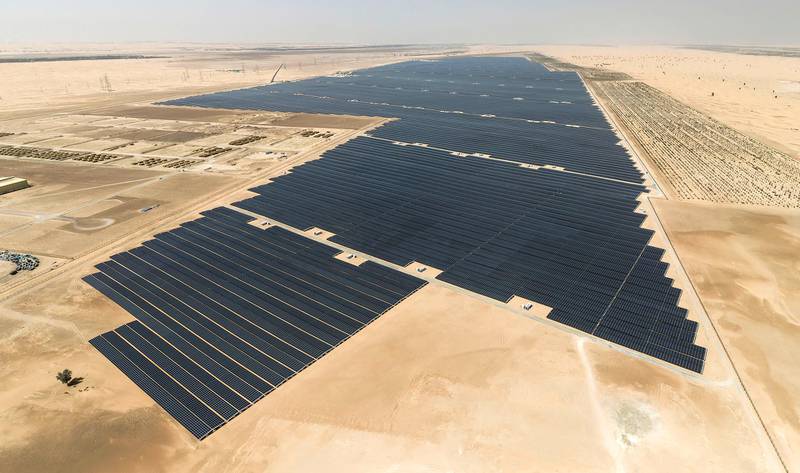 The UAE has announced a federal law that regulates the linkage of distributed renewable energy units to the country’s electrical grid as it seeks to increase the share of clean energy in its overall power mix.

The law aims to reduce the carbon footprint and cut down demand for electricity at peak times from distribution networks, the Ministry of Energy and Infrastructure said on Monday.

Distributed generation refers to technologies that generate electricity at or near where it will be used, such as solar panels and fuel cells. It may serve a single structure, such as a home or business, or it may be part of a micro-grid.

The market for global distributed energy generation is expected to reach $919.6 billion by 2030, from $246.4 billion in 2020, according to Allied Market Research.

The regulation seeks to “unify efforts” and benefit from areas of integration among various federal and local government agencies, as well as the private sector, in a way that contributes to the UAE’s efforts towards achieving net zero emissions by 2050, said Suhail Al Mazrouei, Minister of Energy and Infrastructure.

The UAE, Opec’s third-largest oil producer, is pursuing goals to reduce its carbon footprint and became the first country in the Middle East to set a net-zero target last year.

The Emirates plans to invest $160 billion in clean and renewable energy sources over the next three decades.

It is building the Mohammed bin Rashid Solar Park in Dubai with a five-gigawatt capacity. Abu Dhabi, which is developing a two-gigawatt solar plant in its Al Dhafra region, has set a target of 5.6 gigawatts of solar PV capacity by 2026.

“The UAE continues to develop the legislative and legal system that guarantees a low-carbon future, in a manner that bolsters the course of successive achievements and gains achieved by the country in the climate neutrality issue,” Mr Al Mazrouei said.

The provisions of the new law apply to the operation of electricity distribution production units’ linkage to the distribution network, and to all producers and service providers, including the economic, free and investment zones, the Ministry of Energy and Infrastructure said.

The ministry will put the law into force in co-operation with the relevant federal and local authorities, which undertake the distribution and supply of electricity for consumers, said Sherif Al Olama, Undersecretary of the Ministry of Energy and Infrastructure for the Energy and Petroleum Sector.

The law stipulates that any person wishing to connect a distributed production unit to the network must obtain prior approval from the relevant authority, and conclude the linkage agreement with the service provider in accordance with the legislation in force, Mr Al Olama said.

In 2017, the UAE launched its energy policy to boost clean energy and slash dependence on natural gas to generate power.

The UAE Energy Plan 2050 aims to cut carbon dioxide emissions by 70 per cent, increase clean energy use by 50 per cent and improve energy efficiency by 40 per cent by the middle of the century, resulting in savings worth Dh700 billion ($190.60 billion).

“We are working on developing the energy strategy, especially clean energy, as part of the vision and directives of the judicious leadership which aim to promote sustainability, innovation and transformation towards a green economy, by increasing the percentage of clean and renewable energy,” Mr Al Mazrouei said.