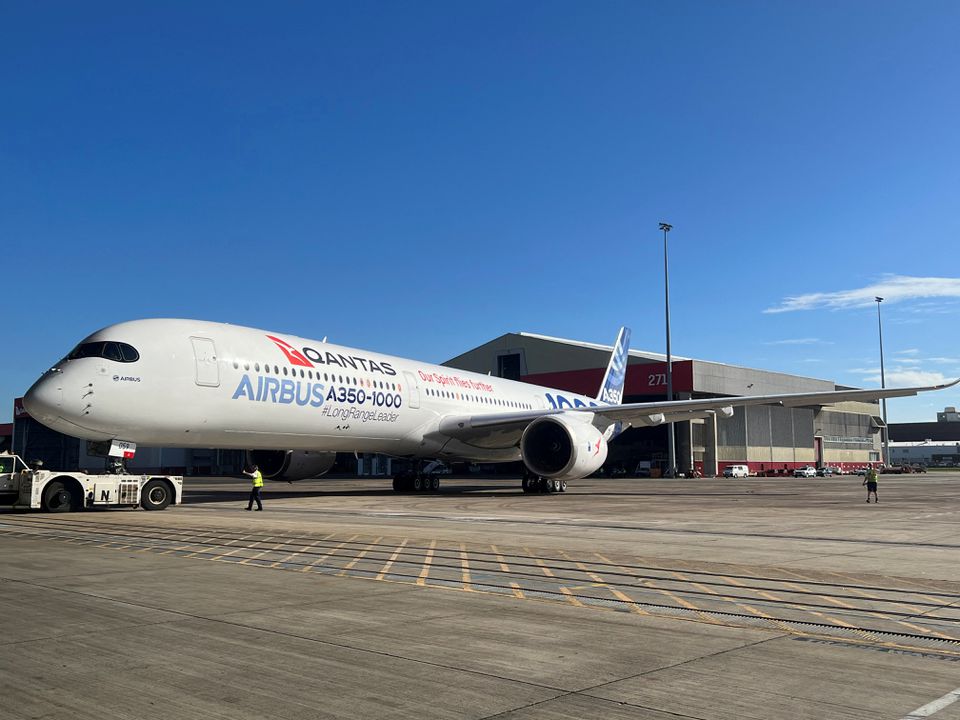 An Airbus A350-1000 test plane arrives at Sydney Airport as the backdrop for Qantas announcing an order for 12 of the planes in Sydney, Australia May 2, 2022. REUTERS/Jamie Freed/File Photo

Qantas Airways and Airbus said on Sunday they would invest up to $200 million to accelerate the development of a sustainable aviation fuels (SAF) industry in Australia to help meet the airline's goal of lowering carbon emissions.

The agreement, announced on the sidelines of global airline industry body IATA's annual meeting in Doha, is in line with Qantas' target of using 10% SAF in its fuel mix by 2030 and comes after it placed a multi-billion dollar order for Airbus narrowbody and widebody planes last month.

The global airline industry, aiming to reach net zero emissions by 2050, is relying on SAF usage to rise from around 100 million litres (26 million gallons) a year in 2021 to at least 449 billion litres a year within three decades, a mammoth and costly undertaking.

Qantas is sourcing SAF in London and Los Angeles but not in Australia.

"The problem is there is no sustainable aviation fuel industry in Australia and we would like to buy this in scale," Qantas Chief Executive Alan Joyce told reporters. "We think the way to do that is to put our money where our mouth is."

The investment, which includes A$50 million ($35 million) of funding previously committed by Qantas, could go to a mix of start-up firms and more established operators and could include equity investments, Joyce said.

The funding will be split between Qantas and Airbus with a smaller contribution from Raytheon Technologies-owned engine maker Pratt & Whitney, he added. Qantas has ordered Pratt & Whitney engines for its new Airbus narrowbody fleet.

Airbus chief executive Guillaume Faury said the deal with Qantas was "unique" due to its recent plane order and Australia's isolated location and was not expected to be replicated with other airlines.

The SAF investment partnership will last for an initial five years with an option to extend, the companies said.

Joyce said he hoped it would encourage the Australian government to improve the policy framework and help fund the development of a local SAF industry.