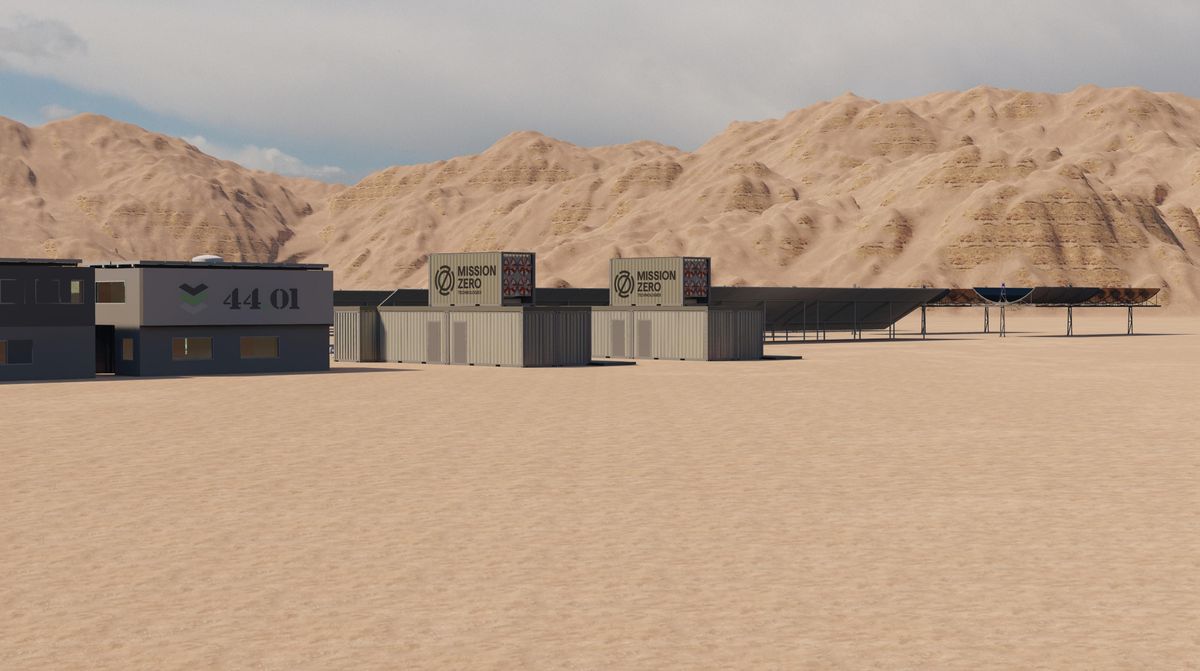 Stretching across the northern coasts of Oman and the United Arab Emirates loom the vast jagged peaks of the Al Hajar mountains. The craggy outcrops are made mostly of a rock called peridotite, which absorbs carbon dioxide from the air and turns it into solid minerals. The mountains could store trillions of tonnes of human-made CO2 emissions, but the natural carbon-mineralization process works at a glacial pace.

London startup 44.01 has found a way to speed it up. For this endeavor, 44.01 is teaming up with another London startup, Mission Zero Technologies, which has developed an energy-efficient method to capture CO2 from air. Called Project Hajar, it plans to pull 1,000 tonnes of CO2/year from air at a demonstration facility in Oman, injecting some 3–4 tonnes/day into the peridotite rocks. A 120 tonne-capacity pilot plant will come online in the first half of 2023.

This ambitious, clear vision made Project Hajar one of 15 winners of a milestone US $1 million award announced by the ongoing XPrize Carbon Removal competition in late April. Funded by Elon Musk, this XPrize has the largest purse yet, $100 million, for methods to pull CO2 from air and lock it away. The 15 teams, selected from over 1,100, had to demonstrate a viable approach along with scale-up plans and cost estimates.

“We require the development of a portfolio of solutions while we take lots of shots on goal.”

Carbon removal is not to be confused with carbon capture at smokestacks. Pulling CO2 from air, where it’s present at a very low concentration, is far more complex and costly. Yet in an April report, the U.N. Intergovernmental Panel on Climate Change says that carbon removal will be “unavoidable” to keep the planet from crossing the life-disrupting warming threshold of 1.5 °C. The decarbonizing method is gaining popularity, with high-profile investors including Musk, Bill Gates, and Google’s parent company Alphabet pouring millions into promising solutions. The Biden Administration also recently announced a $3.5 billion program for large-scale carbon removal.

The 15 award-winning approaches include direct air capture (DAC) using chemicals, turning farm waste into charcoal and burying it, growing algae or kelp, and tweaking ocean pH to boost its natural capacity to soak up CO2. The $50 million grand prize, to be awarded in 2025, is up for grabs for any team that can prove its technique will work at a scale of at least 1,000 tonnes/year.

That immense scale, as well as what happens to the CO2, will decide whether an approach can make a dent in the world’s nearly 36 billion tonnes of annual carbon emissions, says Gaurav Sant, director of UCLA’s Institute for Carbon Management, who has two entries in the competition (SeaChange and BeyonDAC), neither of which was among the 15 milestone awardees. Any meaningful approach needs to convert the gas into something stable and not just bury it in the ground from where it could leak.

“Prizes are important because they provoke optimism,” Sant says. “We require the development of a portfolio of solutions while we take lots of shots on goal. At the same time we need to be robust and thoughtful, both about the technology development but also the eventual fate of CO2.”

Not all 15 winners make the cut with those two criteria. Five projects, for instance, rely on land-based techniques like biomass-based power generation, farming algae, planting trees, or amending soil with charcoal from waste, which limits them, says Christopher Jones, a chemical and biomolecular engineer who studies carbon capture at the Georgia Institute of Technology. These approaches are low cost at under $100 per ton of captured CO2, “but there’s only so much land change you could make to capture a significant amount,” he says. “We need to capture 10 gigatons per year for negative emissions by 2060. Land and biomass approaches only scale to a few gigatons.”

Of known carbon-removal techniques, two hold the most promise, he says, citing a recent National Academies report. One is DAC and the other is carbon mineralization. “Nothing prevents us from scaling these up to the 10 gigatons per year scale needed aside from a commitment, coordination and cooperation.”

“We thought the two things that are most important to really make a difference are cost and scale. It’s not the efficiency of the process.”

Direct air capture has already taken off, with about 20 projects already underway around the world. Most rely on large fans to suck CO2 from air using liquid or solid materials, which are not cheap, and then heating the mixture by burning natural gas to remove CO2 and regenerate the adsorbing material. The downside of DAC is high fossil-fuel energy use and cost.

Sustaera in Cary, N.C., one of six milestone winners pursuing DAC, has found a way to tackle that. Chief Technology Officer Raghubir Gupta worked for two decades on carbon capture at power plants and industrial plants. “One big thing we have that not many others have is practical experience of scaling up the technology to 1,000 tons/day carbon dioxide capture,” he says. “With that background when we looked at CO2 removal from air, we thought the two things that are most important to really make a difference are cost and scale. It’s not the efficiency of the process.”

The energy advantage comes from using electricity instead of heat to separate the CO2 and regenerate the sorbent. More specifically, Sustaera uses Joule heating, in which passing an electric current through a conductor produces heat. Along with the sodium carbonate, the ceramic support contains a conducting material such as carbon nanotubes. Electricity, which can be renewable, locally heats the sorbent and triggers CO2 release. At full scale, Sustaera’s system should be able to capture over 3,000 tons/day of CO2 at under $100/ton. For now, says Gupta, a 1 ton/day facility being built at the company’s R&D site in Research Triangle Park, N.C., should be ready by the end of next year.

While Sustaera focuses on making DAC cheap, Project Hajar’s promise lies in marrying DAC with permanent carbon storage via mineralization. First, project partner Mission Zero Technologies uses solvents to capture CO2 from air blown through a tower. Then an electrochemical cell separates the CO2; the process takes a third of the energy of conventional thermal separation. “It works fully with existing materials and chemicals and off-the-shelf equipment,” says Mission Zero’s cofounder Shiladitya Ghosh. Both the cooling tower and the electrochemical cell technologies are ubiquitous around the world, “so the manufacturing systems are established and available.”

Then, startup 44.01 mixes the CO2 with water and injects it via engineered boreholes into the peridotite rocks to form carbonate minerals. “We accelerate the reaction by creating physical and chemical characteristics to catalyze it such as pressure, temperature, and alkalinity balance in the subsurface,” says the company's co-founder Karan Khimji.

Like its partner, 44.01 also uses off-the-shelf equipment from the oil and gas sector. “I find beauty in that,” Khimji says. “We’re repurposing the same resources as the oil and gas sector to reverse the problem that they have contributed to.” Renewable electricity onsite will power both carbon removal and mineralization at the eventual Oman demonstration facility. Another competitive advantage is permanence. “CO2 is eliminated from existence, it doesn’t remain in gaseous form in the subsurface.”

Canada-based Carbin Minerals is looking at mine waste to lock away CO2. Magnesium-rich pulverized rocks, or tailings, from nickel and diamond mines around the world already soak up tens of thousands of tonnes of CO2 a year, turning it into magnesium carbonate, says CTO and cofounder Peter Scheuermann. By stirring them up to increase the surface area, and tweaking the physical and chemical conditions in tailing storage facilities, the company can make this natural process five times as fast. Using car-size robots to move through the rock slurry and apply a mineral treatment that the team is developing could further double that. “Our goal is to piggyback off existing industrial sites,” he says. “The manipulation technology is all kind of drop-in.” 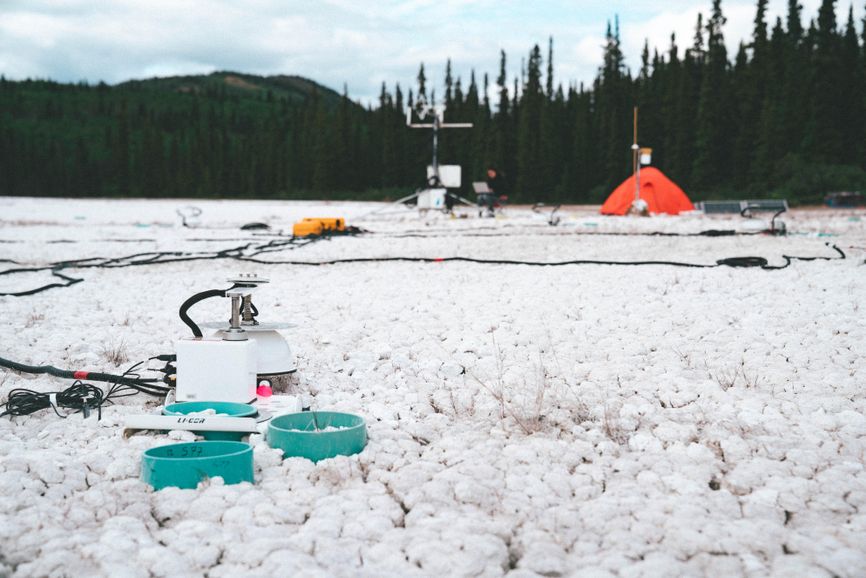 As nickel mining increases to meet battery electrification needs, he adds, these types of mine tailings are predicted to reach 1.4 gigatonnes. “If applied appropriately, this could provide hundreds of thousands to millions of tons per year of carbon removal,” he says, giving carbon-negative nickel for EV batteries, a “one-two punch” in the climate fight.

It’s not clear to Georgia Tech’s Jones whether injecting CO2 into rocks, as Project Hajar is doing, or using mine tailings as Carbin Minerals is doing is better. The former requires energy for capture and injection, while the latter bears an environmental cost. There are also fundamental scientific questions about how much the carbon-mineralization rate can be sped up, he says. And even though there are enough types of rocks around the world to trap billions of tons of CO2, it’s unclear how much is accessible.

For sheer scale, nothing could beat the oceans as a carbon sink, says UCLA’s Sant. Three of the XPrize milestone winners have ocean-based carbon-removal platforms. But the caveat for large-scale impact is to stabilize the CO2 in ocean water, not in a geological formation, he says. The way to do that is to enhance the ocean’s natural uptake of CO2.

Here, Planetary Technologies from Nova Scotia, Canada, might have the most interesting approach. Rising carbon levels are making the world’s oceans acidic. The company purifies mine waste to make a mild antacid to restore oceanwater pH, which should help it pull more CO2 from air while reducing damage from acidification. It says that its mine-waste purification technique also produces hydrogen for energy and metals for batteries. In this way it tackles several different issues at once: carbon removal, green hydrogen production, mine-waste cleanup, and ocean restoration.

The big winner for the XPrize Carbon Removal will be announced on Earth Day 2025. But of course, there is no one winning solution, says Jones. All carbon-removal technologies have merits and demerits and bear the risk of unintended consequences. “But we have to do something,” he says. “Because there is no silver-bullet answer, it allows us to drag our feet and do nothing. The problem is big enough that you need a dozen different technologies to contribute a little.”