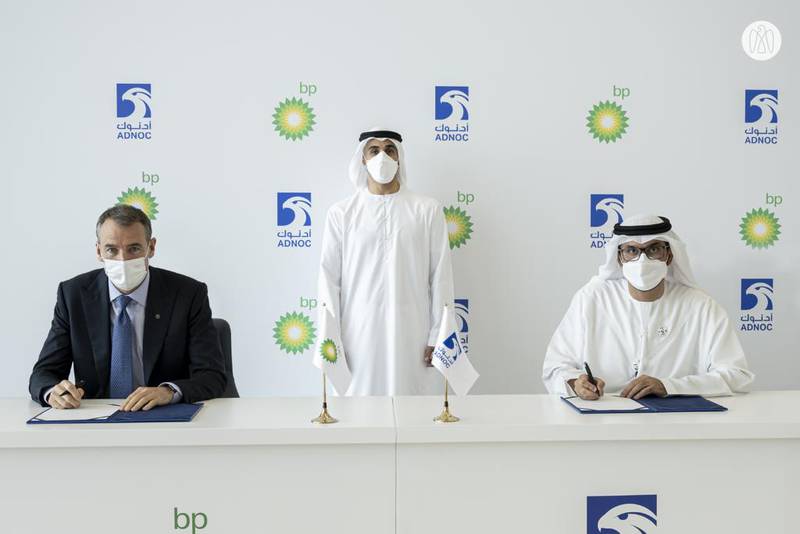 As part of the partnership, Adnoc and BP have advanced to the design phase of the H2Teesside low-carbon hydrogen plant, the largest blue hydrogen project in the UK.

H2Teesside will be developed within Teesside and will provide clean hydrogen to chemical processors, fertiliser manufacturers and heat and power utilities.

Meanwhile, Masdar and BP signed a preliminary deal to explore potential collaboration on the HyGreen Teesside green hydrogen project in the UK’s Teesside industrial cluster, which will be powered by offshore wind, the companies said on Tuesday.

“Adnoc and Masdar’s deepened partnership with BP is a testament to the UAE and UK’s long-standing track record of bilateral partnership in sustainability, as well as the UAE’s intent to play a leading role in the fast-growing clean hydrogen economy, both domestically and internationally,” said Dr Sultan Al Jaber, Minister of Industry and Advanced Technology, Adnoc managing director and group chief executive, and Masdar chairman.

“In the UK, our role in Teesside will represent Adnoc’s first investment into the UK and help to accelerate innovation in decarbonisation of energy in industrial sectors. Similarly, the partners’ collaboration in Abu Dhabi is expected to further position the UAE as a leader in low-carbon energies and technology-driven industrial growth.”

Hydrogen comes in various forms, including blue, green and grey. Blue and grey hydrogen are produced from natural gas, while green is derived from splitting water by electrolysis.

The UAE is drawing up a comprehensive road map to position itself as an exporter of hydrogen and tap into its future potential.

The Gulf country aims to capture about 25 per cent of the global hydrogen market share and is in discussions with many countries to export it, Minister of Energy and Infrastructure Suhail Al Mazrouei said earlier this year.

The latest agreement comes after Adnoc, Masdar and BP signed an energy partnership in September last year during the visit of the President, Sheikh Mohamed, to the UK.

Further expanding this partnership on Tuesday, Adnoc, BP and Masdar agreed to explore the production of sustainable aviation fuels in the UAE by converting municipal waste via gasification that is powered by solar-to-green hydrogen.

The companies will tap into the capabilities of the Abu Dhabi Waste Management Centre, better known as Tadweer, for this project.

The use of sustainable fuels, such as hydrogen, is a key part of the aviation industry’s effort to narrow its emissions and meet the goal of limiting the increase in temperature to 1.5°C above pre-industrial levels.

The industry represents about 2.5 per cent of global human-induced carbon dioxide emissions, according to Airbus.

“Although aviation is considered one of the harder sectors to decarbonise, meaningful progress can be made if a basket of measures — including both SAF and LCAF — are pursued,” said Tony Douglas, group chief executive of Etihad Aviation Group.

“We believe that a balanced approach is required, exploring future opportunities for SAF while improving the carbon intensity of hydrocarbon-based aviation fuels.

Adnoc and BP are also conducting a joint feasibility study for a low-carbon hydrogen project in Abu Dhabi.

Both the UAE and the UK are pivoting to cleaner forms of energy as they aim to reduce emissions and achieve net zero by 2050.

The UAE aims to reduce greenhouse gas emissions by 23.5 per cent by 2030 while the UK aims to achieve 10 gigawatts of low-carbon hydrogen by 2030.