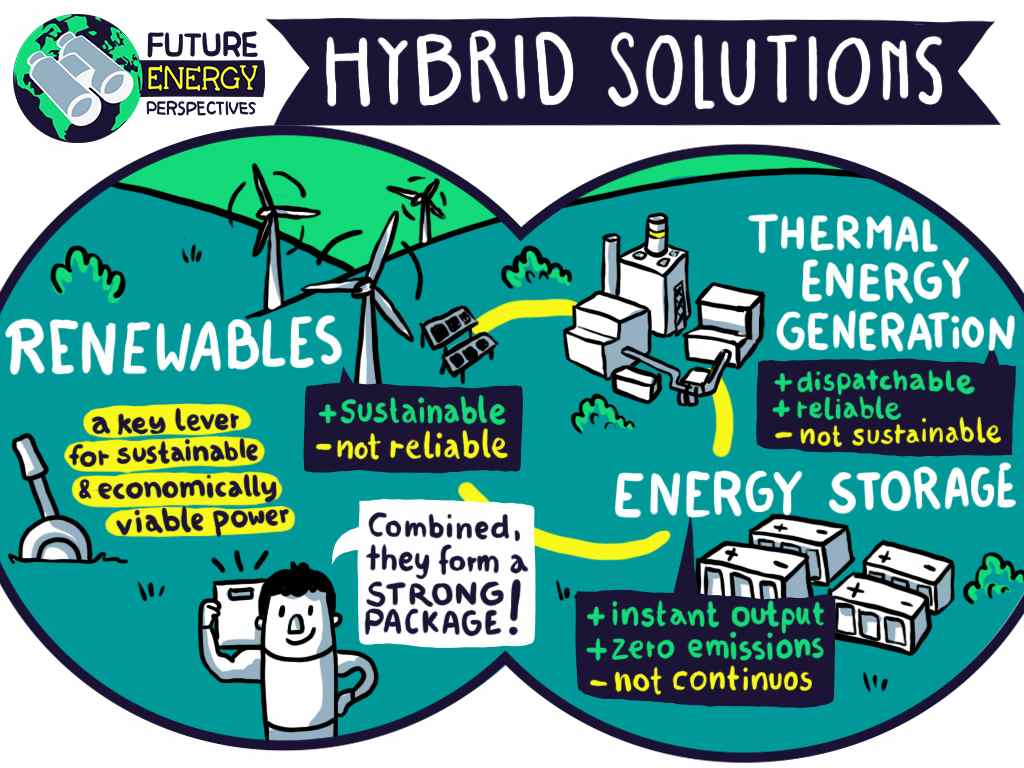 In the coming years, hybrid power plants will become an indispensable part of our energy landscape because they offer a site-specific solution to facilitate carbon-free energy generation and sector coupling for a decarbonised economy. Siemens Energy’s Mario Hüffer explains more.

In the German city of Leipzig, you can find a district heating power plant that is leading the way to a decarbonised energy future.

An electrolyser and a hydrogen storage facility are also expected to be installed on site.

While the plant was being modernized, it also got a battery solution designed to enable black start capability. This means that in the unlikely event of a widespread black-out, the plant can be started up without requiring an external power supply.

Why is this power plant the shape of things to come? It’s not just because of the hydrogen co-firing, the battery solution, or the renewable energy being used. More specifically, it is because of the way these components are becoming integrated into a single system.

It’s a classic case of the package being greater than the sum of its parts. What we see in Leipzig are the contours of a new kind of power generation emerging – hybrid power plants.

These plants combine at least two elements of either renewables, thermal power generation or energy storage; however, they are most powerful if they can combine all three.

In the years and decades to come, hybrid power plants will become increasingly important. As we deal with the challenges of climate change, it is crucial to start decarbonising our economy now.

Though renewables such as wind and solar are essential to the decarbonisation solution, we cannot rely on them completely due to their fluctuating output. For this purpose, energy storage and thermal power (firing clean fuels) can remedy such short-term fluctuations. If integrated into one system, these three building blocks can ensure steady energy flow, grid stability and 24/7 power availability.

Beyond providing a steady power supply, hybrid power plants can help produce clean fuels, such as hydrogen. These in turn can be transferred to other economic sectors like buildings, mobility, industry or agriculture, thereby electrifying these sectors in the process. As a result, these sectors won’t need to burn any more fossil fuels, meaning they will also decarbonise.

Luckily, hybrid power plants aren’t just a vision of the future. Even now, they’re viable options, as we’ll discuss below, for industry, remote locations or municipalities, as Leipzig demonstrates. And eventually, they may even become necessary at the utility scale for making a decarbonised economy a reality.

Let’s take a closer look at a hybrid power plant’s components. Next to renewables, energy storage and thermal power generation also have their shortcomings. Energy storage solutions, while delivering instant green energy (if charged with renewables), are not continuous; they eventually run out.

Such is the case of batteries which are currently the top choice for storing energy to balance load differences in the grid. They can only store enough energy to provide power for a few hours. And while thermal power plants continuously generate energy, in the long run, that’s only sustainable if fired with a clean fuel, such as green hydrogen.

That’s where the versatile solution of hybrid power plants comes in: by integrating all three components in one plant, the weaknesses of each element are addressed, thereby forming a complementary and altogether more powerful solution.

The volatility of renewables virtually becomes a non-issue, thermal power generation is continuous, and while energy storage can’t deliver continuous energy supply on its own, by combining this with thermal power and renewables, such deficiency can be avoided.

Of course, this integration will not work without a fourth element: a smart control system, including a dispatch optimiser, that can manage such a dynamic system.

By combining all these parts together, these elements can be adjusted to a site’s specific needs, thus optimising their use.

So, in what contexts do these hybrid power plants make sense today? To be clear, the hybrid power plants described here are still a novel concept. But in light of ongoing changes to our energy systems, they appear to be an obvious solution to many of the challenges we face.

Therefore, it’s no surprise that there are demonstrator plants planned or already existing and even commercial plants being planned or in development.

At the Zero Emissions Hydrogen Turbine Center (ZEHTC) at Siemens Energy’s Finspång facility in Sweden, a small hybrid power plant which combines solar PV, an electrolyser, hydrogen and battery storage, plus gas turbines, is being tested.

The purpose of this demonstrator, which is partly funded by the EU and realized with several partners, is to gain practical experience on how to run such a carbon-free hybrid power plant.

Some of the lessons learned at the ZEHTC will be applied at HYFLEXPOWER, an industrial power plant at a paper factory in Saillat-sure-Vienne in France.

Also an EU-funded project, HYFLEXPOWER is driven by a consortium of several companies and institutions.

It is designed to eventually fire 100% green hydrogen but will start out co-firing 30% hydrogen by the end of this year.

Combining renewables, an electrolyser for hydrogen production, hydrogen storage as well as gas turbines, it will have a capacity of 12MW.

When commissioned in 2023, HYFLEXPOWER will be the world’s first industrial-scale hybrid power plant. And it’s projected that its energy production based on green hydrogen will eventually save up to 65,000 tons of CO2 per year.

But that’s not all. In French Guiana, Siemens Energy, together with the French infrastructure company Meridiam and other partners, is building the world’s first utility-scale hybrid power plant, which will combine a 55MW photovoltaic field, batteries, an electrolyser, and a fuel cell.

The plant – scheduled to be commissioned in late 2023 – will supply 10,000 households around the clock with electricity generated solely from solar power in a climate-neutral process.

As already mentioned, commercial plants such as the one in French Guiana wouldn’t be possible without a smart single operating system that flexibly manages the unique setup each hybrid power plant has.

Such a control system has been operating since 2019 at the Isabela Hybrid Power Plant on the environmentally-sensitive Galapagos Islands.

The Isabela Hybrid Power Plant includes multiple energy sources, such as a photovoltaic plant, an array of biofuel generators and an electrical energy storage system. Since starting operation in 2018, it continues to intelligently manage the requirements of the island’s power demands.

A key function is using weather forecasts and energy demand cycles for managing energy generation and storage accordingly. All in all, this hybrid power plant shows that smart controls make integrating diverse elements in a hybrid power plant feasible.

Worldwide, there are several other hybrid projects currently in development, particularly in remote locations such as islands – and for good reason. On an island, a hybrid power plant will not just supply green energy that’s stable thanks to storage solutions: it will also allow remote communities to be less dependent on expensive fuel that needs to be imported.

A hybrid power plant for a mining operation in a remote location not only allows the company to reduce energy costs, but also to decarbonise its existing power supply, thereby shrinking its carbon footprint.

Now this obviously brings up the economics of hybrid power plants in general. The main business case for hybrid power plants today stems from the necessity of decarbonising the economy. Developments, such as cheaper renewables, higher CO2 prices and other financial incentives, make that attainable.

If we start a gas-fired powered plant, for example, we can decrease its levelised cost of energy (LCoE). How? With the ~50% of renewables that are being added (see graphic below). 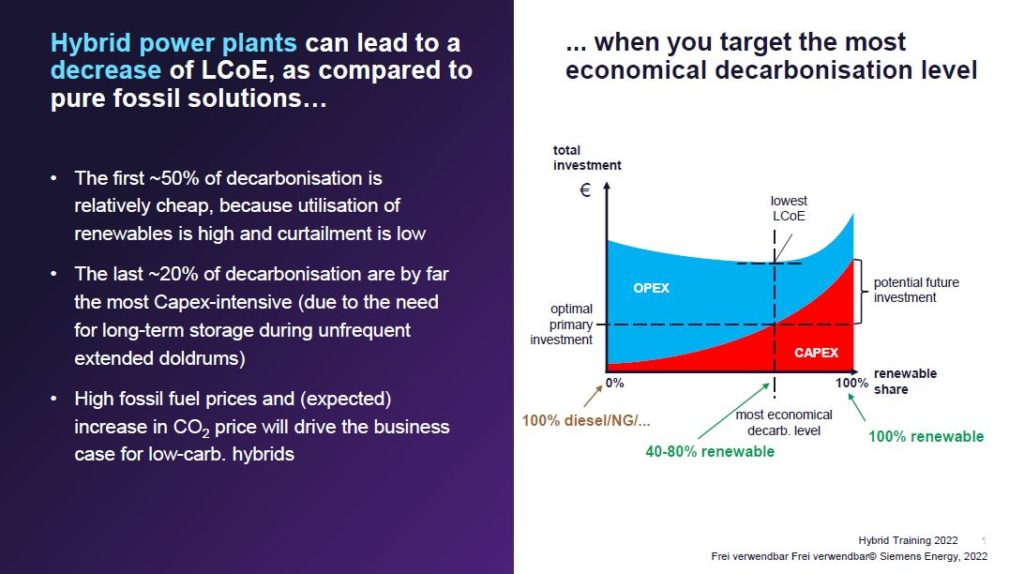 And that’s because utilising renewables is expected to be high, and curtailment low. After that, however, LCoE goes up again, due to the need for investing more in long-term storage in times of extended doldrums.

Thus, when aiming to decarbonise energy generation in a cost-efficient manner, it is clear that hybrid power plants provide a highly-versatile technical solution we need to take seriously.

The main enabler here will be green hydrogen production combined with hydrogen storage. This allows processing hydrogen into other fuels, such as ammonia and methanol, and later transferring the energy stored in these fuels to other energy-intensive economic sectors.

Finally, it should be clear, that any hybrid solution being realised would have to address site-specific requirements as well as technological and economic boundary conditions.

Simply put, windy regions are most suited for integrating wind power, whereas sunny regions are optimal for photovoltaics. That’s why any hybrid power plant will represent a site-specific tailored mix and match of technologies.

There’ll be no one-size-fits-all solution, but rather different configurations will fit different needs. Ultimately, this flexibility also means that hybrid power plants will make the most of resources in any situation.