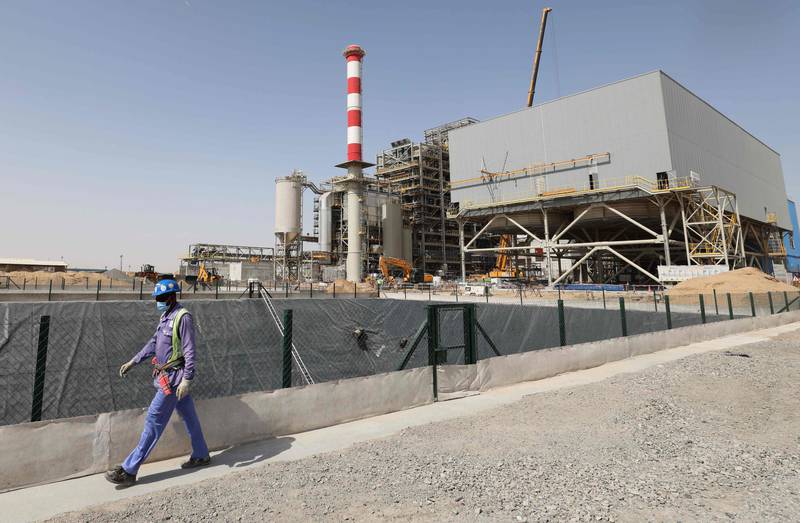 Construction at the waste-to-energy plant in Sharjah is complete and systems testing has started. AFP

Construction of the UAE's first waste-to-energy plant is complete and systems testing is under way.

The plant in Sharjah is central to its plans to become the Middle East's first zero-waste city and support the UAE's 2050 net-zero goals.

The complex will turn unrecyclable waste into clean energy and ensure nothing is sent to landfill, state news agency Wam reported. Currently, about a quarter of Sharjah's waste ends up in the ground.

At full capacity, the plant will help divert up to 300,000 tonnes of unrecyclable waste each year while producing 30 megawatts of low-carbon electricity. This is enough to power 28,000 homes.

It will displace almost 450,000 tonnes of carbon dioxide a year and preserve the equivalent of 45 million cubic metres of natural gas.

The plant is the first project under Emirates Waste to Energy, a joint venture involving Beeah Energy and Masdar.

Khaled Al Huraimel, group chief executive of Beeah, said the commissioning of the plant will be a significant moment for the UAE's sustainability efforts.

“Completion of construction is an important milestone for our Emirates Waste to Energy venture as we continue to pioneer clean energy,” Mr Al Huraimel said.

“We look forward to a successful testing and commissioning phase followed by achieving full operations, which will make Sharjah the Middle East's first zero-waste city.

“We are confident that once the plant is fully operational, we will also show how waste-to-energy is an essential to sustaining the circular economy, tackling the challenge of unrecyclable waste, and serving as a more affordable, low-carbon alternative to fossil fuels.”

How does the plant work?

Toxins and pollutants are filtered from the flue gases produced by the process. Bottom ash is collected to recover metals and ash material to be used in construction and roadwork, while fly ash is collected and treated separately.

Unrecyclable waste will be transported to the plant from a nearby waste management complex operated by Beeah.

On the road to net zero

Emirates Waste to Energy aims to open similar plants across the UAE.

“Our goal is to realise a zero-waste, clean energy future, starting with the UAE, where we are driven by the Net Zero by 2050 Strategic Initiative,” Mr Al Huraimel said.

In October, the UAE set out plans to achieve net-zero emissions by that date.

The initiative will involve Dh600 billion being invested in clean and renewable energy sources in the next three decades.

Abu Dhabi this month said it aimed to ensure no waste is sent to landfill after 2071.

The zero waste proposal, made on Thursday at an online discussion of Abu Dhabi’s conservation plans, is part of the emirate’s Environmental Centennial 2071, a 50-year timetable launched by the Environment Agency Abu Dhabi.

Officials said they planned to use satellites to track waste, open sorting centres that use artificial intelligence to separate rubbish from recyclables and use unmanned vehicles to clean the emirate’s streets.

The UAE is supporting global efforts to address climate change and will host the 28th UN global climate talks — Cop28 — in 2023.