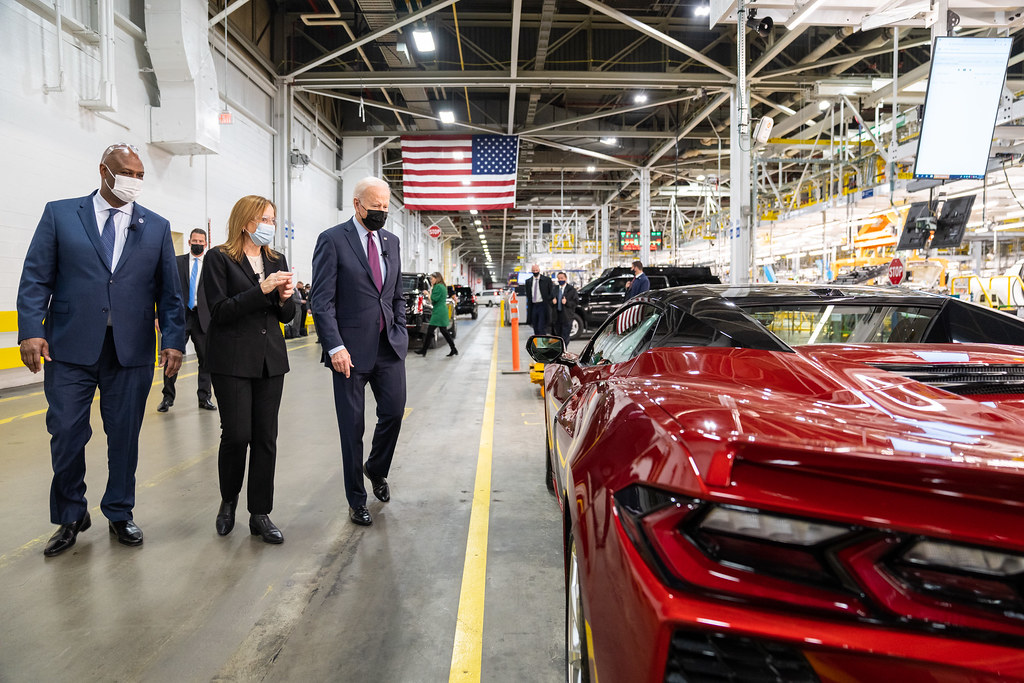 Production will occur under strong environmental and labor standards as well as through tribal engagements, according to the White House, though some Democrats in Congress have concerns because the mining sector is regulated through a 150-year-old law.

Greater federal support for alternatives to fossil fuels would reduce the leverage of Russian President Vladimir Putin and others on matters of U.S. national and economic security, though it reflects a long-term play rather than an immediate response to the economic damage caused by the war.

Biden’s order employing the Defense Production Act would provide a meaningful financial incentive to develop a domestic supply chain for electric vehicles and enable the shift away from gasoline-fueled autos.

Putin’s assault on Ukraine began more than a month ago, rattling global energy markets for petroleum and natural gas in ways that would likely hurt growth worldwide. U.S. crude oil was trading at more than $107 a barrel on Wednesday morning, up from nearly $60 a year ago as inflation has emerged as a persistent threat.

The Democratic president is invoking Title III of the 1950 Defense Production Act, which would provide the government with economic authorities to address industrial shortfalls. Mining companies could access money under the law for the production of minerals including lithium, nickel, graphite, cobalt, and manganese.

The government would not be issuing loans or directly purchasing minerals. The funding would instead cover feasibility studies, production at current operations and modernizing safety standards and production.

Lawmakers are divided on whether invoking the act is the best policy, as economic and national security issues may come into conflict with environmental protections despite assurances that standards would be followed.

A bipartisan group of senators, led by Sens. Joe Manchin, D-W.Va., and Lisa Murkowski, R-Alaska, have urged Biden to deploy the Defense Production Action to boost the domestic output of critical minerals such as lithium and graphite.

“The United States relies almost exclusively on foreign nations – many of them unfriendly and with nonexistent labor and environmental standards – to meet much of our present mineral demand,” the senators said in a letter to Biden this month. “Allowing our foreign mineral dependence to persist is a growing threat to U.S. national security, and we need to take every step to address it.”

Manchin, who chairs the Senate Energy Committee, is a key player on energy issues and singlehandedly blocked Biden’s signature social and environmental legislation known as Build Back Better. He has since said he is open to some of the bill’s climate and energy proposals, as long as they don’t punish fossil fuels such as natural gas.

The letter was also signed by Republican Sens. Bill Cassidy of Louisiana and Jim Risch of Idaho.

But some Democrats on the House Natural Resources Committee urged Biden not to invoke the Defense Production Act, saying that increased mining projects on public lands could jeopardize public health and sacred sites in the West.

“As it turns out, the oil and gas industry isn’t the only one taking advantage of tragedy in Ukraine,” said Rep. Raul Grijalva of Arizona, the panel’s chairman. “Like their fossil fuel peers, mining companies are making opportunistic pleas to advance a decades-old mining agenda that lets polluters off the hook and leaves Americans suffering the consequences. Fast-tracking mining under antiquated standards that put our public health, wilderness, and sacred sites at risk of permanent damage just isn’t the answer.”

The mining industry operates under the 150-year-old Mining Law of 1872. Under this statute, companies mining on public lands pay no federal royalties and are not held financially responsible for cleaning up the tens of thousands of toxic abandoned mine sites scattered across the United States.

Grijalva said he will propose legislation to reform the mining law later this spring.